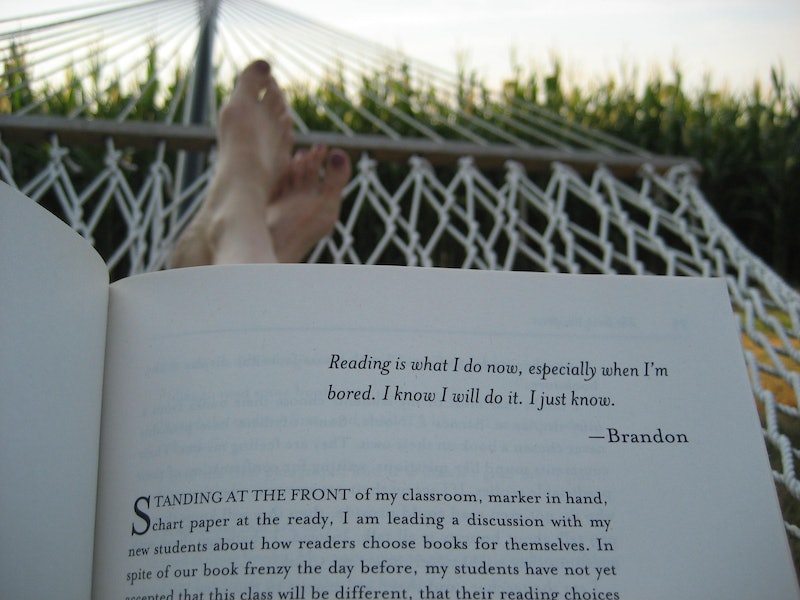 If you were anything like the young person I was in the 1990s, one surefire way to spark your interest in doing something was for someone (usually your 'rents) to expressly forbid you to do it — or in this case, expressly forbid you to read it. You know the books I’m talking about: the titles parents quietly muttered over when they discovered them on your 7th grade reading list, or the ones your neighborhood librarian gently mentioned were outside your recommended reading level. Instantly those were the books that became irresistible — whether you truly understood them or not.

As a burgeoning book-lover in the '90s I was interested in any book I could get my hands on; but especially those that seemed to be just a bit beyond my grasp, or a little forbidden. Sure, back then I definitely misunderstood all their varied nuances: the symbolism, the subtle humor, the storytelling that was going on between the lines. And I certainly didn’t grasp the books’ significance in the larger literary canon, as I’m able to now. I just knew I wanted to read them. All of them. Immediately.

Sound familiar? Then check out these nine books you probably read in the '90s but definitely didn’t understand until now.

1. To Kill a Mockingbird by Harper Lee

Who knew To Kill A Mockingbird was as hilarious as it is tragic? When you first read this book — right around the same age Scout and Jem were — you probably found it only to be somber, complicated, and filled with injustices that made your small self feel even smaller. And while it is, in fact, all of those things, adulthood readers are better able fully realize the hilarity of the childhood antics and imaginations of the book’s young characters. You're also better able to understand the way Harper Lee's difficult themes still resonate with our society today. This is definitely a richer read a decade-plus later.

2. Lord of the Flies by William Golding

If your early schooling was anything like mine, then Gary Paulsen’s Hatchet was followed a bit too closely by William Golding’s Lord of the Flies . Ergo, the diorama-inspiring woodland tale of survival that I came to know and love in Hatchet turned into an inexplicable bloodbath filled with interpersonal politics that resulted nightmares about a young lad named Piggy. That much exploration into the darkness of human nature can be confusing to anyone.

Aka: the reason you refused to touch another glue stick after the 7th grade. Sure, as an adult you understand Animal Farm is really a brilliant, critical parody of communist life in the Stalin-era Soviet Union, but in the '90s this was basically a novel about a sweet horse named Boxer who got turned into glue.

4. The Giver by Lois Lowry

Is it just me, or is YA utopic fiction just as disturbing as YA dystopic fiction? Believe it or not, The Giver might be a novel you actually understood better in the 1990s than you do now. Back in the good ol’ 5th grade the colorful life of all-feeling Jonas might have seemed like the only life worth living. Now it kinda makes you want to pour yourself a slightly larger glass of wine.

As a pre-teen reading Tuck Everlasting , you might have thought Winnie Foster was a complete fool for turning down Jesse Tuck’s offer to drink the water from the spring of immortality, thereby remaining perfectly 17-years-old and married to him forever. Post-Y2K you probably know there was literally nothing perfect about being 17, and totally see Winnie’s point now.

6. Out of the Dust by Karen Hesse

Billie Jo’s story is understandable enough: Out of the Dust is historical fiction set in dust-bowl era Oklahoma, featuring a young girl’s story to survive, thrive, and maintain hope throughout her family’s economic and environmental disasters. What might have thrown you off is that this entire novel is written in free verse — a style you’re totally loving now.

Like I mentioned above, the most rebellious thing I did in the 1990s was read novels a few academic grades beyond my recommended age range — so I totally misunderstood the gravity of the narrator’s addiction in Go Ask Alice . This title becomes a lot more meaningful once you understand addiction better; especially when you realize the narrator’s addiction began when she was unknowingly drugged at a party. Plus there's the whole, ohh so this was written Scared Straight-style?

8. The Catcher in the Rye by J.D. Salinger

If you didn’t understand The Catcher in the Rye when you first read it in the ‘90s and you understand it now, please drop me a line and explain yourself — because quite frankly, I still don’t get it. Holden is disgruntled; Holden is anxious; Holden is rebelling for the sake of rebelling. There must be more, yes? What am I missing?

9. The Scarlet Letter by Nathaniel Hawthorne

If you totally missed the complete badass, heroine of her own drama that Hester Prynne is the first time you read The Scarlet Letter , you’re definitely not alone. This book might have made you super angry circa 1999 (and let’s face it, you probably didn’t understand all the sexual politics at play) but today you can definitely recognize Hester as the feminist, saving-herself lady that she is. And thank goodness for that.