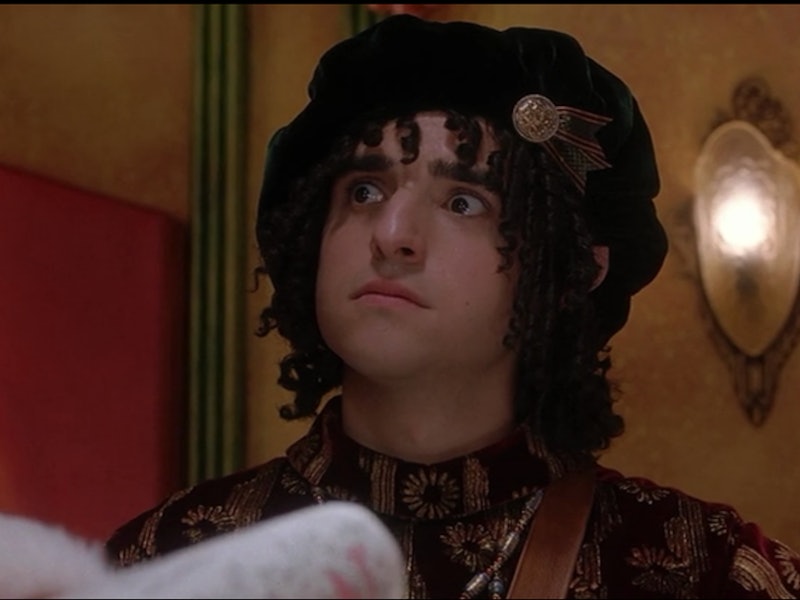 Raise your hands (okay, not really, but you know) if you remember The Santa Clause. Well, good news — even if you haven't seen the Christmas movie starring Tim Allen as a normal guy who becomes Kris Kringle, you're going to have an opinion on this hot button topic that's been causing debates since the dawn of time (OK, 1994). Friendships have ended, lives have been forever changed, and taste in elves have been questioned over this contentious subject — the attractiveness of a certain on-screen elf. Have you ever felt thirsty for one of Santa's helpers? If the answer is no, your worldview is probably about to change. In The Santa Clause, there's one special elf named Bernard (portrayed by David Krumholtz) and it seems no one can decide if Bernard the Elf from The Santa Clause is hot (or not).

Which is why Bustle has decided to settle this important debate once and for all, by asking some readers to share their thoughts on Bernard's status as a sex symbol for all elves. Here are the hilarious — and believe me, passionate — responses. But first, of course, here's a look back at Bernard, to refresh your memory.

1. "YES, HOT. Because there's just something magical about a grown man-elf who can wear a velvet beret." — Olivia

2. "OMG... I have always loved Bernard the Elf!! He was like my first celebrity crush haha." — Mir

3. "Honestly I think it was just because I was four when the movie came out and I didn't know what having a crush was. And then when I was a teen (and re-watching) I had a crush on every boy with brown hair. Also I think velvet berets are hot, especially paired with many necklaces." — Kara

4. "He was a little angry and kind of a bad boy but with a shy, sweet smile. He was basically the Christmas elf version of Jess from GG." — Martha

5. "There was something kind of intriguing about him, actually..." — Kelsea

6. "I had a huge crush on this actor but mostly because he played Neil's hot older brother on Freaks and Geeks. And was in 10 Things I Hate About You..." — Kristen

7. "I've never seen the movie but judging by his picture he has long, spiral curled pubic hair so yes, very." — Bryan

Then, Those Who Just Don't Get It:

10. "Not even a little bit of a babe. I always thought he was annoying AF. Gotta do something about that hair." — Michelle

11. "He's not my type. Maybe it's the velvet hat, dangly jewelry, and Renaissance-like tunic? Yeah, probably that." — Emily

12. "Bernard was not hot. It's hard for me to explain why, because he's so not, I never thought I'd have to defend this position. After looking at an image of him from The Santa Clause, my only thought is YOU ARE ALL DISTRACTED BY HIS ACCESSORIES. The hat, the necklace, the hair. It attracted you all like moths to a flame. Remove the decorations, and you will see a not attractive elf with an over the top Brooklyn accent. #NODISRESPECTTODAVIDKRUMHOLTZ" — SAM

13. "It's going to be a 100% HARD NO Bernard was not hot. I found him more attractive in 10 Things I Hate About You because I have a thing for weird, sweet, nerdy guys. But here? No way, I could never like a guy who had better curls than me." — Melissa

14. "Sh*t no. His hair was bitchin' but when he walks out of Charlie's kitchen munching on a sandwich he was totally gross. Not to mention when he yelled at the elves 'Are we on a coffee break???' Dude had an elfen chip on his shoulder the size of Texas." — Karen

And Those In The Middle Of The Road:

19. "As a kid, sure, I believe I thought he was. But mostly cause there really wasn't any other eye candy options in that movie." — Christa

20. "He was when he played in an ABC show but the curls are killing his mojo here." — Carley

21. "Overall no. But I do remember a moment. Maybe toward the end. When his bossy grumpy guarded-ness softened and he had a glimmer of what would probably be described as the Christmas spirit and it made you think 'oh that's why. He gets it!' I'm going to re-watch and find the scene I'm looking for!" — Christina

22. "I mean, I have a grudge against a show that makes me type a number instead of a letter like Numb3rs [in which Krumholtz starred], so I can't get on board." — Kate

So What's The Final Verdict? Is He Hot Or Not?

It looks as if those who do think he's hot were really into his hair and sense of fashion, but those who would rather pass were turned off by his hair, fashion, and New York attitude. And while opinion of Bernard continues to be divided, there seems to be much more love toward his actor, who has been undoubtedly hot in other films and television shows. Whether you're #TeamBernard or not, this argument is definitely one to add onto the annual holiday debate list.