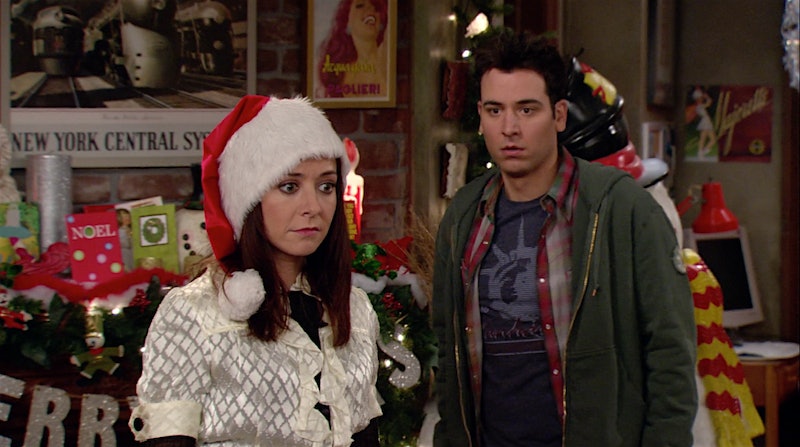 Now that the Christmas season is in full swing, I've been diving headfirst into the holiday spirit by partaking in one of the most sacred and time honored traditions: watching as many Christmas themed TV episodes and movies as I possibly can. From the Friends Holiday Armadillo to Love Actually and Elf, I simply can't get enough of these holly jolly moments. But like any diehard Christmas fan, I know that these holiday favorites are just the tip of the merriment iceberg. In fact, I just recently took the time to rewatch How I Met Your Mother 's Grinch-centric episode "How Lily Stole Christmas" and it reminded me of just how wonderful it really was.

To be honest, I hadn't watched this particular HIMYM episode in quite a while (quite possibly since it first debuted on television) and had forgotten a vast majority of the storyline. But having now gone through it all again, I was able to pick up a few extra hidden gems throughout the episode that many of us may have missed during the first time around. So in case you're a little fuzzy on the details and are in need of an extra dose of holiday cheer, here are a few things you may never have noticed about this HIMYM Christmas classic.

Anyone else think that Clint's Christmas sweater could rival Neal's from The Santa Claus? (I can't tell if I just came up with the best or worst crossover idea ever.)

In fact, he refused to even get so much as a glimpse of Lily's Winter Wonderland until his final paper was done. Now that's some Grade A willpower for you.

3. Answering Machines Used To Be A Thing

Because why wouldn't you want your personal messages on display for all to hear? (Spoiler: Ted was about to find out just how dangerous that can be.)

While listening to some of their old answering machine messages, Lily stumbles across one from Ted's dad, explaining that he's about to go off fishing with his friend Clint for the weekend. Yup, the same Clint who is now currently dating Ted's mom. So you guess how that friendship turned out.

In one of the other forgotten voice messages, Lily hears one left by Ted to Marshall, telling him to get over being depressed about Lily dumping him. "You've gotta get over that Grinch," he states before hanging up. Except he didn't actually use the word "Grinch." He used a much worse word than that. (Hint: it reminds with witch.) And while I get that Ted was trying to help Marshall get over his heartache in any way he could, it was completely unnecessary for him to degrade Lily (who is also supposed to be his friend) in the process. She went off to pursue her dreams. That shouldn't warrant bad mouthing and name calling. Not cool, Mosby. Not cool at all.

6. Those Flashbacks Were Brutal

To help emphasize why Ted said what he said, we flash back in time to when Marshall and Lily were broken up and, as you can imagine, it was a devastating sight to behold. Please, make it stop.

Ah, if we only knew then what we know now.

8. Before Siri, There Was Voice Dial

Neither of which can understand who you really want to call. Nice to know that some things never change. Also, check out that sweet razor phone that Ted's sporting. Talk about legendary.

9. How Did Lily Transport All Of Those Decorations By Herself?

Which, as most of you know, is a rarity on this show.

11. Ted & Lily's Friendship Is The Unsung Hero Of This Show

Despite Ted's bad behavior, the reasoning behind why he harbored ill will toward Lily was kinda sweet. He loves her, so when she left it affected him more than any of us realized. We'd been so focused on Marshall's feelings that we forgot how much Ted cared as well. These two are #squadgoals through and through.

12. There Was A Major Foreshadowing Moment

After Robin spiked Barney's tea with codeine, Ted responds to this action by saying, "You're going to be a great mom." First of all, this remark hits us on a whole new level now that we know Robin is unable to have kids of her own. And secondly, this sentiment also teases the ending of the entire series. Robin may not have been the biological mother of Ted's kids, but she ends up with him in the end, and certainly would have played an important role in their lives. The writers have been trolling this whole time.

That's why she didn't want Lily getting an easy bake oven as a child — so she wouldn't feel the need to conform to traditional gender roles. Way to go, mom!

The gang shows up outside of Ted's family Christmas pretending to be carolers singing "Silent Night." It's just too bad Carol Singers wasn't available.