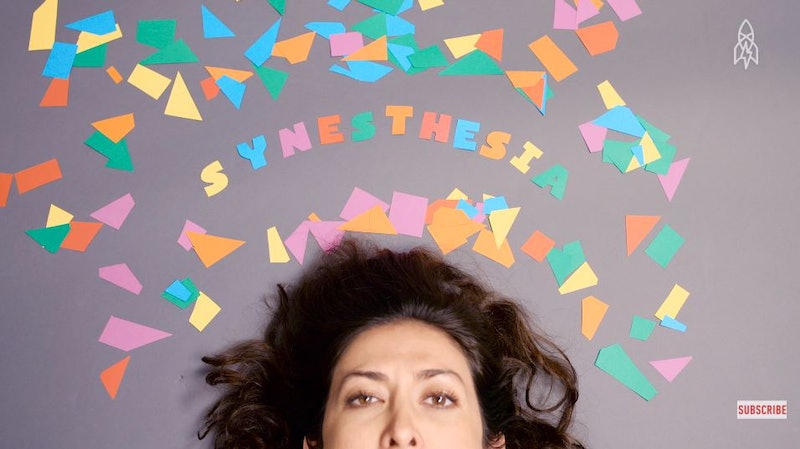 There’s a memorable scene in an early episode of House, M.D. where House — doped up and tripping like whoa — describes being able to hear colors. But you don’t need to be on psychedelics in order to have a similar experience—as long as you’re one of the approximately one in 2,000 people who have synesthesia, that is. But what is synesthesia? And perhaps more pressingly, what’s it like to have it? That’s what a recent video from the YouTube channel Great Big Story tackles. Great Big Story is “a video network dedicated to the untold, overlooked, and flat-out amazing”; the idea is to tell the stories of all the “incredible things” humans are capable of. And you guys? Synesthesia really is incredible, according to the people who were interviewed for the video.

Synesthesia is typically described as “a phenomenon of mixed senses” — that is, when people who have it are experiencing one stimulus, they’ll also simultaneously experience it through another one of their senses, even if that second sense has seemingly nothing to do with the original stimulus. Sounds might also look like colors to people with synesthesia; particular words might have particular tastes; and so on and so forth. Each instance of the phenomenon is unique to the person experiencing it, though, so there's not one universal description of, say, what color the sound of a laughing baby is.

We don’t totally know what causes synesthesia, though, which is probably why it was dismissed in the scientific community for so long. According to LiveScience, synesthesia was until fairly recently chalked up as either “a product of overactive imaginations or a sign of mental illness”; however, researchers now think it might tell us a little more about both how our brains are organized and how perception works. One theory posits that it's caused by new neural connections popping up in the brain, which subsequently break down the boundaries that formerly divided the senses; another, meanwhile, suggests that we’re all born with synesthesia, but lose it as our brains mature. Either way, though, we do know that synesthesia is biological — which means there’s a whooooole lot of research left to be done before we can say that we understand it.

So: What’s it actually like to have synesthesia? Here’s how some of the people in the video experience day-to-day things — although again, bear in mind that individual experiences vary from person to person. Scroll down to watch the full video.

This guy’s favorite number is 42 — because for him, four is green, two is red, and green and red are his favorite colors. It’s worth noting, though, that not all people with synesthesia associate the same numbers with the same colors. These three people, for example, all see the number three as totally different colors:

Or, it might not be a color at all. This woman says the number six is a "flirty woman" to her:

This woman also experiences it in shapes.

To this woman, the sound of violins looks like navy blue rectangles moving from right to left.

This woman says the sound of banjos tastes like Oreos to her. Best. Sound. Ever.

Or at least, the word “people” tastes like meatballs to this particular person — meatballs in marinara sauce. The point is that words can taste like things for people with synesthesia.

Aaaaaaand now I have the world’s biggest craving for a meatball sub. I guess I know what I’m getting for lunch today.

Watch the full video below for more:

More like this
TikTok's Butter Board Might Be The New Cheese Plate
By Emma Carey
On TikTok, Tinned Fish Date Night Is The Latest Viral Food Obsession
By Emma Carey
This Psychological Effect Might Be Keeping You From Hitting Your Goals
By Lexi Inks
8 Completely Unserious Tips To Make Your Cuffing Season A Success
By Ginny Hogan
Get Even More From Bustle — Sign Up For The Newsletter