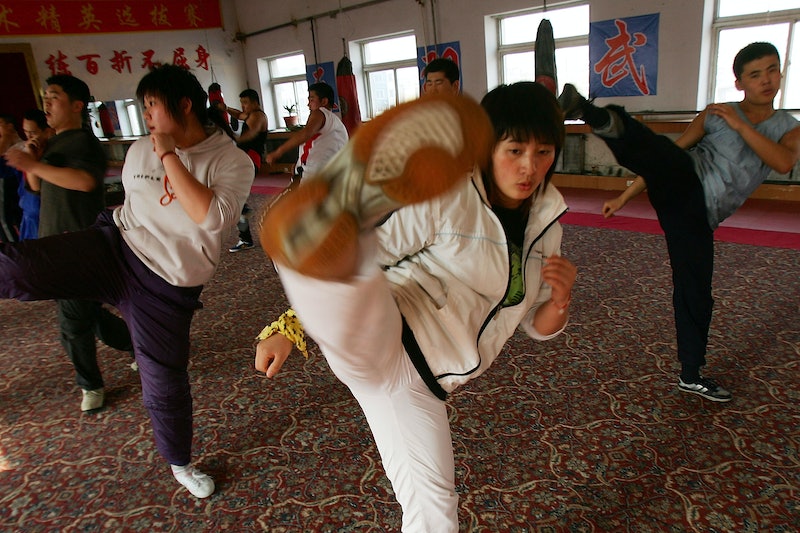 The latest trend in China: female bodyguards. As the country with the most millionaires in the world, China is home to quite a few people who want and can afford personal security —it's become something of a status symbol. Predictably, most bodyguards are men, but Tianjiao International Security Academy, a Beijing-based training camp that trains bodyguards, says that the number of female applicants and graduates is rising. And, as it turns out, women might have an edge in the business.

"Female bodyguards are more appealing to female employers or family members of male employers," the academy's founder Chen Yongqing told CNN. And that's important considering a full third of Chinese millionaires are now women. They are also are more likely to blend in while on the job. After all, when potential threats look for a bodyguard they're probably looking for a tall, muscular man. Women are less conspicuous. It's one of those interesting moments when sexism actually give women an advantage in the job market.

So what does it take to become a bodyguard? Well it kind of sounds like a combination of boot camp and charm school. Students at Tianjiao International Security Academy do learn things like "the art of wine tasting" so that they can understand and effectively communicate with their bosses, for whom some bodyguards also double as personal assistants. But they also undergo serious physical training that involves intense exercise, slogging through mud, and practicing how to subdue an attacker.

Surprisingly (or not) women have a higher graduation rate from the academy. Though plenty of women do quit training, which lasts for three weeks and costs up to 12,800 yuan ($2,100), men are more likely to wash out than their female counterparts.

So why this trend? It could be the tough economy, the chance to meet members of the elite, the promise of high-paid, steady work, or the growth of the industry as more and more Chinese millionaires and billionaires emerge. Chen says that those are all factors, but also says it's due to the increase in female confidence in China. "Women today are more confident in taking careers that are usually perceived as male-dominated," Chen says. And that is awesome.

More like this
This Is When Netflix Is Going To Start Charging You For Sharing Passwords
By Darshita Goyal
6 Organizations Fighting Police Brutality That You Can Support Right Now
By Syeda Khaula Saad and JR Thorpe
Watch Jacinda Arden’s Devastatingly Honest Resignation Speech
By Sam Ramsden
25 Inspiring Quotes From Black Women To Celebrate Black History Month
By Kyli Rodriguez-Cayro and JR Thorpe
Get Even More From Bustle — Sign Up For The Newsletter
From hair trends to relationship advice, our daily newsletter has everything you need to sound like a person who’s on TikTok, even if you aren’t.