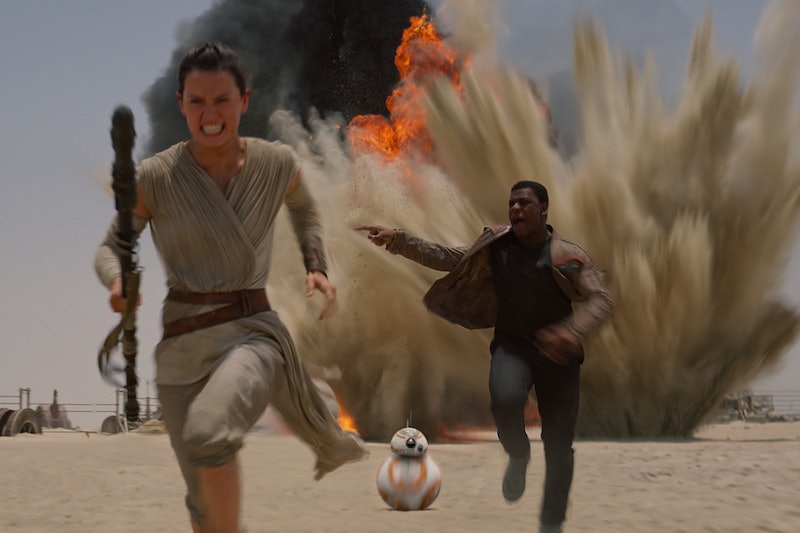 Taking on one of the world's most beloved franchises has to be not only difficult, but also insanely nerve-racking. And, for the upcoming continuation of the Star Wars franchise, Star Wars: The Force Awakens Director J.J. Abrams is the one who will be holding all of burden — whether the film is deemed successful or not. And what usually deems a film successful? How much it makes in the box office both during opening weekend and beyond, of course. Naturally, Abrams is nervous that Star Wars will fail, and that's an understandable way for a director reviving a beloved franchise to feel. Really, it is. It's just also super unnecessary.

OK, now you may be thinking exactly what I'm thinking... Star Wars is going to straight-up destroy any of the "competition" it may have this weekend. With generations upon generations of fans expected to flock to theaters, the George Lucas phenomenon has already broken box office records with $50 million gained in advanced ticket sales — a record previously held by the start of The Hunger Games saga — and with a large amount of IMAX showings being sold out as well. Also, with a December 18 release, the latest Star Wars film is standing in a good place. Not only due to the holiday movie watching season, but also in part to past successes that also happened to open in that same weekend: Avatar and Titanic. Those two movies that hold records for topping the box office multiple weekends in a row. So, what exactly does Abrams have the fear? Well... letting down Disney, I guess.

As Steven Spielberg explained, "Oh, J.J. is terrified. There's a lot of pressure on J.J. to start paying Disney back for, you know, the franchise they bought from George Lucas," the legendary director spilled about his friend on 60 Minutes. And the paying Disney back that he's referring to? Well, he's referring to the $1.5 billion dollars spent on the film that needs to made back in order for Disney to even turn a profit on the film's overall budget. And, along with those expenses, it would also be nice if Disney could get back the money they spent in 2012 — on buying the Star Wars franchise from George Lucas in the first place! So, yep, that's a lot of pressure weighing on Abram's shoulders (aside from the pressure of public scrutiny he will most-likely face from die-hard fans as well).

So, can he do it? Well, it seems like dealing with fans is something that Abrams is already prepared for: "You just know that there will be people, no matter what you do, that will have issues with some aspect," he said in an interview, "You just know there is some number that is being thrown out there that will not be hit. You just know." But, what about the money? While it doesn't seem like the director himself has commented on the matter as of yet, the odds seem to be in his favor.

Box office trackers are expecting Star Wars: The Force Awakens to make at least enough to break the current opening weekend record of $512 million globally that 2015's summer blockbuster Jurassic World brought in. And, while the film has been described as being in "uncharted territory" by Disney Chairman Alan Horn, that's not making me lose any hope either when it comes to the billions Abrams is responsible for earning back. According to senior media analyst, Paul Dergarabedian, he's expecting the film to actually close in on a record number of $3 billion in sales worldwide (not exactly all during opening weekend — but still)! "This is a monumental event. I've been doing this for over 20 years, and I've never seen this interest and passion in a single movie," he predicted.

However, whether it breaks the expected records or not, one thing remains clear. This weekend we are about to witness film history as a franchise that has spanned almost 40 years returns — and sets the bar for all other long-lasting film franchises to come.