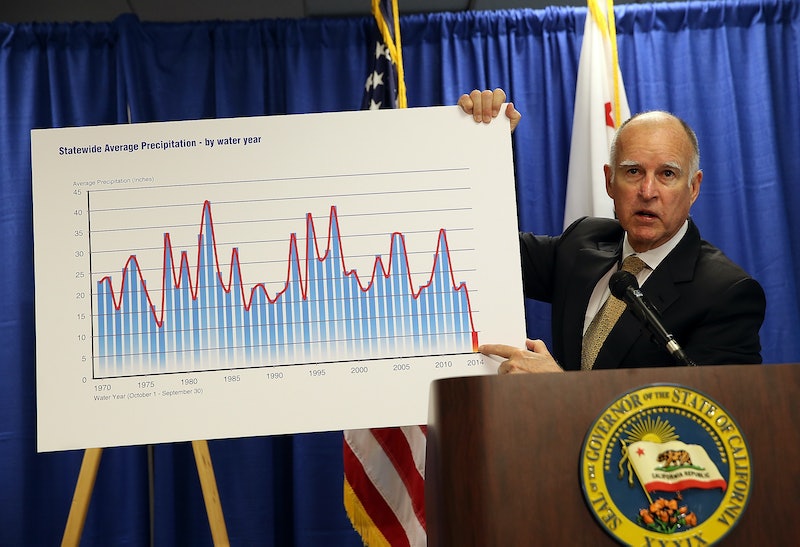 On Friday, California Governor Jerry Brown declared a statewide drought emergency, as rainfall in the state is getting critically, historically low. How low, you ask? Well, in 2013, there was less rainfall in the state than in any year since 1849, aka when they started keeping records. In other words, the last time the state has been this dry was before the outbreak of the Civil War. In the northern sierra, snowpack has been only eight percent of what it normally is this time of year. That’s a big problem, because after it melts, snow on the sierras comprises the biggest and most reliable water supply for California. Gulp.

"All I can report to you is it's not raining today and it's not likely to rain for several weeks," Brown said at a press conference in San Francisco. “We are in an unprecedented, very serious situation.”

Brown’s declaration consisted of twenty specific directives to state agencies. The Department of Forestry and Fire Protection will hire additional seasonal firefighters to combat the heightened risk of fire, the Department of Water Resources will initiate a statewide water reduction campaign in an attempt to reduce Californians’ water usage by 20 percent, and all state officials will expedite approval of voluntary water sales and transfers within the state. In addition, state agencies won’t be allowed to launch new or non-essential landscaping projects around public buildings or highways, and all agencies were ordered to reduce their own water usage (duh).

To Brown, this situation may seem a bit familiar. In 1977, during his first term as California Governor, the state also experienced a record drought. When asked Friday if that experience might come in handy now, Brown quipped, "I don’t know that I kept my notebook from 1977." (Yuck yuck yuck.)

Here in California, a lot of us have been reading about the polar vortex with smug satisfaction. We’ve been relieved that, while the East Coast is getting pummeled with a freeze of apocalyptic proportions, the weather here has been abnormally beautiful and temperate, with clear skies and temperatures in the mid-70s. But we need to get over ourselves right here and now, because California is experiencing weather disaster of its own, one with the potential to be much worse than anything that’s happening on the east coast.

More like this
All The Most Stylish Winter Wardrobe Staples You Can Buy On Walmart.com
By Jessie Quinn
10 Organizations To Support On Latinx Women's Equal Pay Day
By Caroline Burke and Mia Mercado
Meet The Rugby World Cup Breakout Star Making The Sport More Inclusive
By Shahed Ezaydi
Here's How To Support Jewish People Amid Rising Antisemitism
By Hannah Orenstein
Get Even More From Bustle — Sign Up For The Newsletter