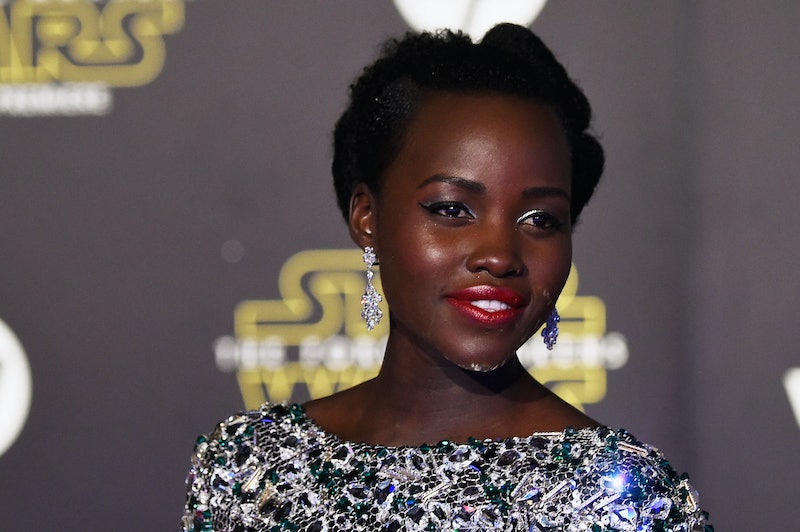 When it comes to hotly anticipated films, producers and screenwriters try to keep a veil of secrecy surrounding the development process to prevent plot lines, casting ideas, and key spoilers from leaking to the public before a film's release. After all, the less information that a viewer has about the movie they're seeing, the more chance for excitement and surprise (and, in turn, big box office success). And Lupita Nyong'o, one of the stars of Star Wars: The Force Awakens , learned this firsthand when she she auditioned for the film back in 2014. On an episode of The Ellen DeGeneres Show airing Tuesday, Nyong'o told the host that she had no idea what she was actually auditioning for!

Nyong'o said she had accepted the audition right before she won the Academy Award for 12 Years A Slave, her 2013 breakthrough acting role, because she "thought she should find work." She explained to DeGeneres, "I didn’t really know what I was auditioning for. I knew I was going in for J.J. [Abrams, the director]. I was so busy, I was working with adrenaline, so I went in and out. I barely even remember that audition." She added that she was told it was "for a big movie" (no kidding!) and that she was given a substitute script to work with in the audition. She barely remembers anything about it, saying that she ran around pretending to hold a gun. I wish I could see that audition tape!

It was well-known that the casting process for this movie would be intense, but who knew that even the front-runners for the role would have no idea what they were getting themselves into?!

Nyong'o found out that the audition was for the latest Star Wars movie two months later while on vacation in Morocco. Abrams explained that it was for a "motion capture" role, which Nyong'o and DeGeneres explained involved putting more than 125 plastic dots all over her face, a process that initially took 2.5 hours to complete each day of filming. She says they got it down to under an hour by the end of filming, but I can't imagine sitting there for that long every single day. Stars are no strangers to spending lots of time in the makeup chair for a role, like when Jennifer Lopez had individual crystals placed on her body back in 1999 for her "Waiting for Tonight" music video. But that was for a few days of shooting — at most — this was for an entire movie!

Nyong'o said she was not allowed to remove the dots, which were also on her teeth and lips, so when it came time for lunch, she just ate them! "At lunch time, I would just eat the dots and then they would put them back," she said. DeGeneres asked, "Do you think that is good for you? You're swallowing expensive plastic." Nyong'o laughed, saying, "I'm choosing my poison."

She added that the motion capture dots are used to capture her expression by using four cameras with LED lights on a helmet which are then used on the avatar of her character, Maz Ganata.

This is definitely one of the strangest things I've heard in a long time, but I guess that's the magic of movie making!