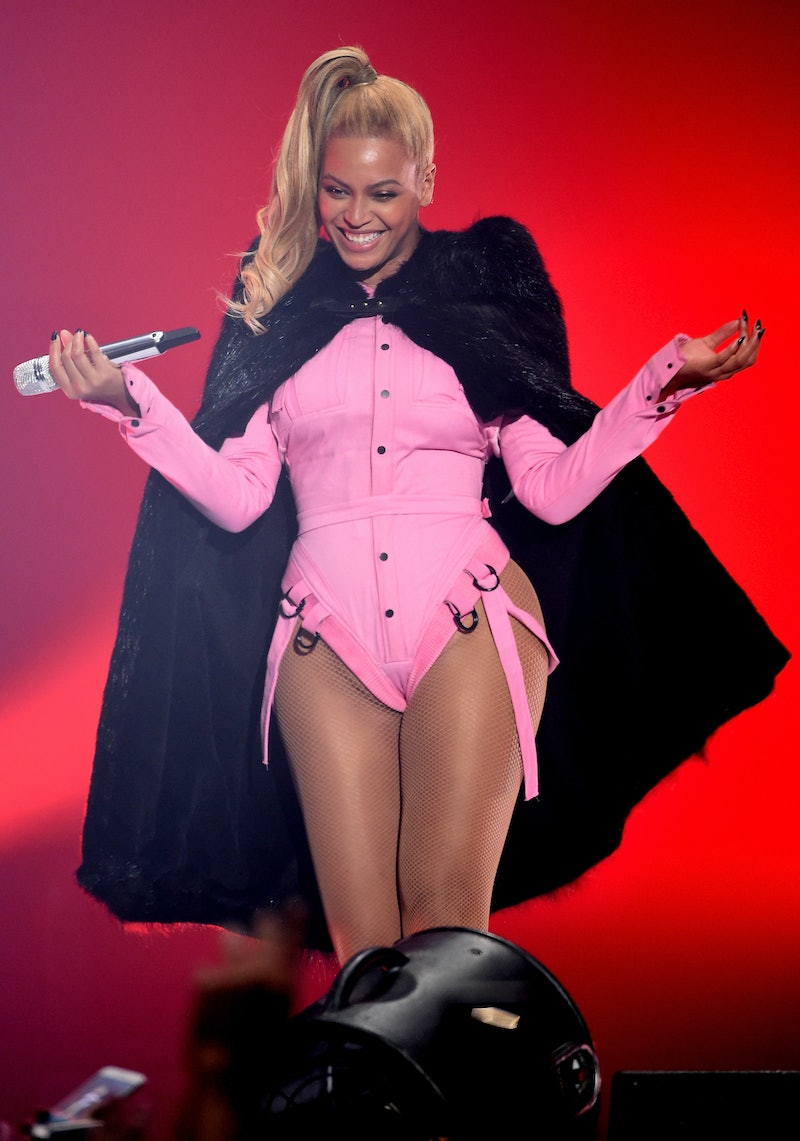 While some people interpret holiday dressing as adding a Santa hat for a festive look, this pop star chose a different way to get in the holiday spirit. In what could be the most interesting ugly sweater ever, Beyoncé dressed as a Christmas tree while she was in New York. Move over, Buddy the Elf, because you've got some serious fashion competition from Queen Bey herself!

If you thought Beyoncé's on-stage ensembles were some of the most unique you've ever seen, then be prepared to be shocked. Complete with garland, ornaments, and even a stocking, the singer wore a floor length sweater that showed some serious Christmas spirit. According to Just Jared, Beyoncé wore the bedazzled sweater to an office party. I'm sure there's a touching story about how Blue Ivy helped her decorate it or something, but even if there isn't, this is the most intense holiday ensemble that I've ever seen. I think even Lady Gaga would be proud of this one.

The singer rocked a pair of Christmas tree sunglasses and a Santa hat to really complete her look. Although she did have a colorful striped dress and combat boots on underneath, all eyes were on her DIY-esque sweater and accessories. The weather along the East Coast has been super warm for this time of year, so it's not surprising that Queen Bey needed a little extra holiday cheer to get her in the spirti. Thanks for the extra boost of Christmas excitment, Bey!

This might be the most interesting outfit that the star has worn, but she's rocked some other surprising looks over the years. Whether Beyoncé is showing some serious leg or using her personal style to make a memorable impact, there's no one who dresses quite like her.

1. When She Showed Up Almost Naked

Beyoncé hopped on the barely there trend before anyone else when she wore this sheer dress to the 2015 Met Gala.

2. When She Announced Her Pregnancy

She ripped open her sparkly jacket to rub her stomach at the 2011 VMAs, confirming that all the baby rumors were true.

3. When Destiny's Child Came Back In All Leather

She surprised everyone with a Destiny's Child reunion at the 2013 Super Bowl.

4. When She Combined Styles For The Feelin' Myself Video

Just when I thought her style couldn't get any more interesting, the Feelin' Myself video came out.

The singer looked like a angel when she took the stage to sing at the 2015 Grammys.

6. When She Wore A Minnie Mouse Hat To Sit Courtside

The woman's style is sophisticated, but every now and then she surprises us with a quirky accessory or two.

7. When She Wore Pinterest's Favorite Sunhat

The famous "do not disturb" hat got even more famous when the singer rocked it while on vacation.

Want more holiday tips? Check out the video below, and be sure to subscribe to Bustle’s YouTube page for more hacks and tricks!

More like this
Prince William & His Kids Are Adorable In A Smiley New Photo For Father’s Day
By Stephanie Topacio Long
Kim Kardashian Father’s Day Tribute To Kanye West Called Him “The Best Dad”
By Stephanie Topacio Long
Dan Levy’s Father’s Day Pic Of Dad Eugene Spoofs The ‘Schitt’s Creek’ Vet’s Past
By Grace Wehniainen
35 Ideas For 4th Of July Nails That Go Beyond Red, White, & Blue
By Audrey Noble
Get Even More From Bustle — Sign Up For The Newsletter