It's been a while since we've heard from Diego Luna, but this new project seems like one worth mentioning: Luna's directed Cesar Chavez: An American Hero , a biopic starring American Hustle actor Michael Peña as the titular civil rights activist and labor organizer, and said biopic's now got a trailer out.

The film also stars Rosario Dawson, America Ferrera, and John Malcovich. As this first trailer shows, the film depicts the work that landed him a place in history, including his co-founding of United Farm Workers, the organization of groundbreaking farmworker strikes, and his commitment to nonviolent protest. Here's a bit of the synopsis:

Chronicling the birth of a modern American movement, Cesar Chavez tells the story of the famed civil rights leader and labor organizer torn between his duties as a husband and father and his commitment to securing a living wage for farm workers. Passionate but soft-spoken, Chavez embraced non-violence as he battled greed and prejudice in his struggle to bring dignity to people. Chavez inspired millions of Americans from all walks of life who never worked on a farm to fight for social justice. His triumphant journey is a remarkable testament to the power of one individual’s ability to change the world.

The film comes out March 28. 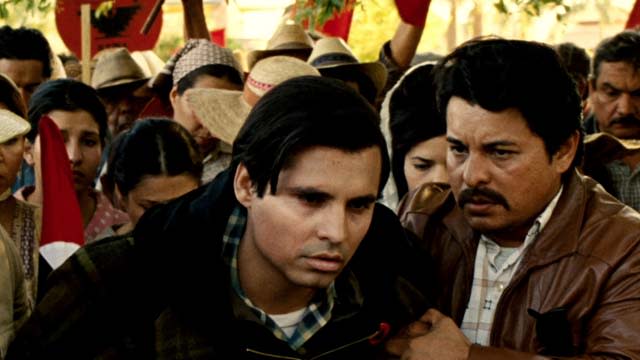