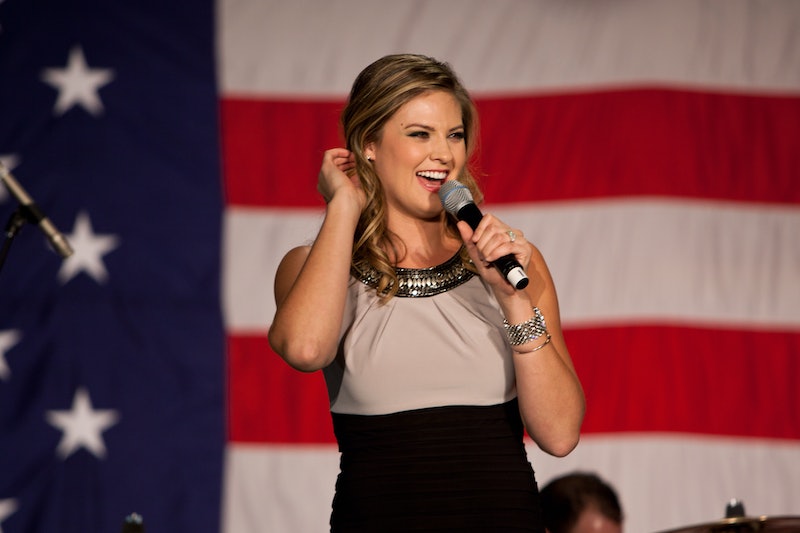 The fifth and final Republican showdown of 2015 started with a bang on Tuesday night. Before a crowded debate hall inside the Venetian Hotel in Las Vegas, Nevada, former Massachusetts Sen. Scott Brown's daughter Ayla Brown sang the national anthem to grand applause, kicking off the evening in perfect patriotic style. It wasn't the first time Brown had been in the spotlight either — from the campaign trail to the reality TV main-stage, Brown is a seasoned veteran when it comes to performing for the masses.

That doesn't mean the 27-year-old didn't have nerves. The day of her big performance, where she also sang "God Bless America" ahead of CNN's preliminary undercard debate, Brown admitted to feeling a bit overwhelmed. "Sitting in the Venetian Hotel on the Las Vegas Strip, I'm pinching myself," she wrote in an email to her supporters on Tuesday, according to a report by The Hill. "[It's an] honor."

The daughter of a prominent East Coast politician, Brown is largely comfortable in the spotlight it seems. A former college basketball player and American Idol alum, Brown thrilled fans during the first three rounds of competition on the popular Fox reality show in 2006 before ultimately being eliminated. Despite the letdown, the Massachusetts native took everything in stride, going on to produce a total of six country music studio albums.

Brown has also played to large crowds within the political realm over the years. From Fox & Friends and Huckabee, to singing the National Anthem with the Boston Pops on the Fourth of July "to an audience of more than 1 million people," according to her official biography, the country artist has amassed a curriculum vitae that most singers and songwriters would drool over. True to character though, she's also remained humble about it all.

"It's not about the big labels ... it's about the FANS," Brown wrote in a blog post in March, discussing her latest album Let Love In. "That is the entire reason I am doing this record!"

Perhaps one of the reasons Brown has been able to remain positive over the years is her father, who she has said used to sing to her as a child. "I used to think that my dad was Elvis Presley," Brown joked in an Entertainment Weekly interview in 2010. "He thinks that he gave me the singing talent, because he used to sing to my mom's tummy every day. So I'll give it to him, why not?"

If the former senator had anything to do with Brown's exceptional performances at Tuesday night's GOP debate, then giving him at least partial credit for boosting her confidence all those years ago might not be such a bad idea.