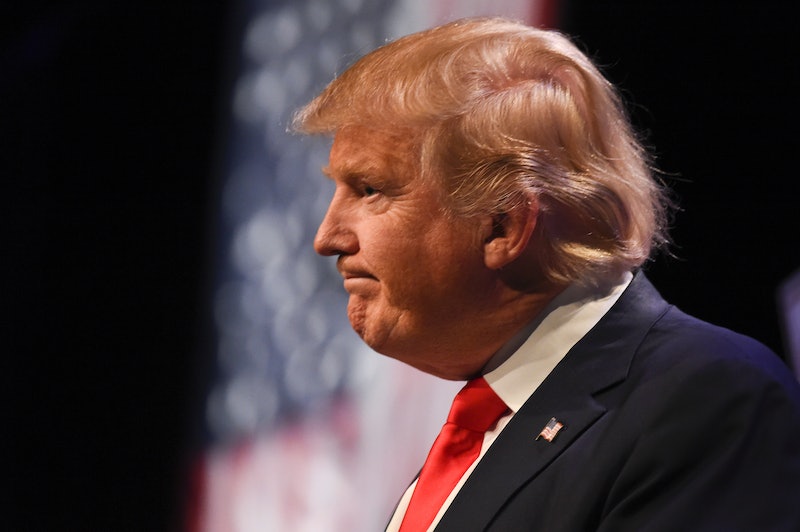 It's been a month of proposed bans on Muslims entering the country, toxic support rallies and continued insults to Megyn Kelly — in other words, all has been normal for Donald Trump on the campaign trail. But, hey, his bombastic personality and lightning-quick neck whips does make him an unintentionally funny live person, which means that the fifth GOP debate was full of Donald Trump memes, and these may be the last thing we can laugh when talking about the candidate.

There hasn't been a lot to laugh about in Trump's campaign, to be honest. His once comical presidential campaign has taken a truly dark turn, making the man that Jon Stewart once said was a comic gift from God and putting him in harsh relief as the dangerous person who could be our next president.

Trump's meme-ability really lies in his facial expressions, which he either a) Has absolutely no control over, or b) He has a distinct awareness will get him more tweet time. Take this side-by-side footage of Jeb! Bush and Donald Trump from the debate.

But while we might all love a split screen with Donald constantly on one side for maximum memes, it seems that the internet has latched onto a different aspect of Trump's performance: his partial ban on the Internet. Although we're not entirely sure what Trump was actually proposing, the Internet (the part Donald hasn't shut down, I guess) had a really good time with it.

The Internet had a lot of fun being self-referential, but at the end of the day the Trump memes fell on the same hilarious and familiar tropes that are just as absurd as The Donald himself.