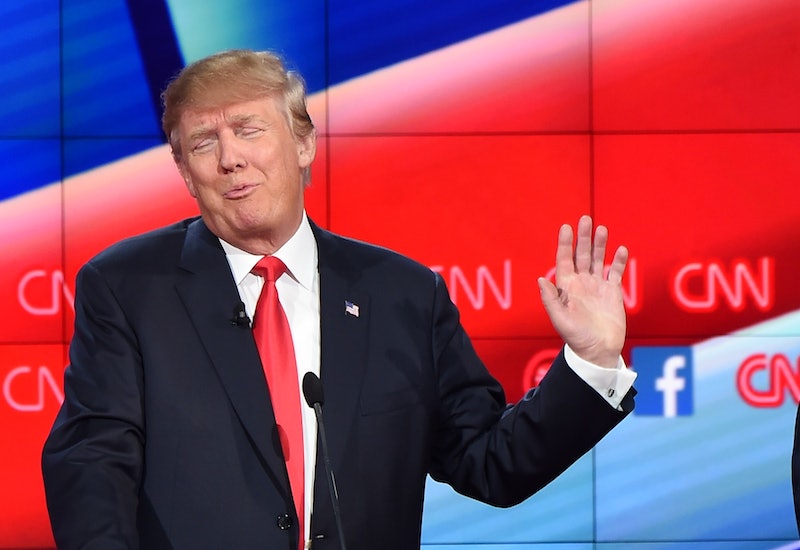 Donald Trump has had his fair share of hecklers on the campaign trail, but perhaps none have disrupted him on such a high-profile level as the one who interrupted him during Tuesday's GOP presidential debate. Kai Newkirk is no stranger to taking a political stand and having his voice be heard. In fact, Newkirk — who is the co-founder of 99rise, an organization against corporate political spending — is known for attacking the power of big money through creative (and controversial) methods.

During the debate, Wolf Blitzer asked Trump whether Americans were safer if dictators were in charge in the Middle East, and before Trump could answer, one could hear a distant voice from the theater balcony yell, "The American people deserve free and fair elections, not billionaire auctions." While it was hard to make out exactly what Newkirk said next, the activist stated via his Twitter that he was taking a stand against the wealthy elite's hijacking of what should be a free election of the people. "I just disrupted #GOPDebate 2 call 4 free & fair elections not billionaire auctions," he tweeted. "It's time 4 a #DemocracySpring http://democracyspring.org."

Judging by Trump's reaction, the heckling business was nothing new.

And it wasn't new for Newkirk, either. In 2014, the activist made headlines for secretly recording a Supreme Court proceeding and posting the footage online. Unless pre-approved by a judge, any audio or video recording inside a courtroom is banned — whether it's illegal is a whole other discussion — and since it's SCOTUS, you know they take that rule very seriously.

The footage shows Newkirk disrupting oral arguments for Citizens United v. Federal Election Commission, the 2010 ruling that allows people to raise and spend unlimited funds on behalf of candidates under the argument that their money is separate from actual campaign dollars regulated by the FEC. The decision opened the door for big donors and gave rise to super PACs. It's also why the Koch brothers have been able to pledge to spend nearly $1 billion during this election cycle.

Democratic socialist and grassroots candidate Bernie Sanders hates Citizens United, and so does Newkirk, which is why he has repeatedly made a stand against the ruling and its costly aftermath. On his 99rise bio, Newkirk writes, "I am marching because unless we end corruption and win real democracy the possibility of a just, livable future for everyone I love may be lost. My life has taught me that standing up to do the right thing to be there for those we love — no matter how hard it is — is the most important thing at the end of the day."

It's an admirable mission that's worth getting national attention. Trump's self-financed campaign is the epitome of corporate dollars permeating the political system, and Newkirk stood up to him and his bags of billions on live television.

And then the RNC kicked him out.