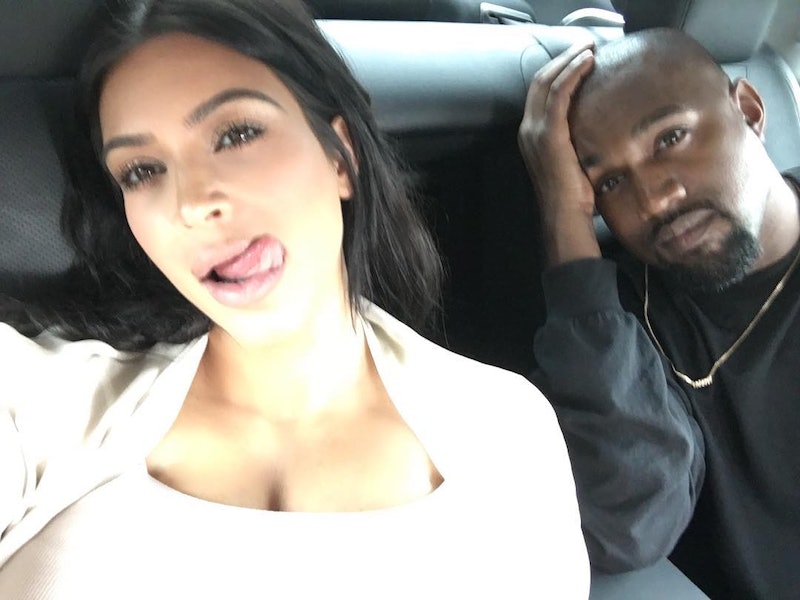 Though it may seem like a spectacularly new invention, the selfie has existed for thousands of years — as the impulse to capture ourselves at our finest has been around since well before the invention of Instagram or cameras. But as the concept of the selfie has gained steam and become a full-blown cultural phenomenon in recent years — complete with "selfie" attaining "word-of-the-year" status in 2013 and the wild success of Kim Kardashian's book of selfies — scientific interest in why we take them and what they mean has accelerated. And while studies about many aspects of our selfie obsession are still being conducted, some very interesting facts have already been discovered: for instance, what certain selfie poses say about our personalities...and why certain selfie-taking behaviors might mean that you are a psychopath.

As research is increasingly revealing, the selfie is not as simple as it seems. When you snap a selfie, you're not just showing off your excellent duck face abilities, or proving that you ran into your favorite celeb at the supermarket; you're also taking part in a large-scale competition for attention online, and possibly damaging your real-world relationships in the process. It's not all grim news — but it is all worth thinking about the next time you take so many selfies of how you're out having fun with your friends, you forget to actually have any fun with your friends. So put down that filter (even if you named your kid after it) and read on; it seems that a selfie reveals much more than how great your hair looks today.

1. There Is A Scientific Formula For Creating A Popular Selfie

There is, as it happens, a formula that can guarantee that you're taking the "best" selfie possible — if by "best" you mean "most likely to be approved and garner likes from others". (That may very well not be what you personally mean by "best", but for the purposes of this study, researchers assumed that everyone was engineering their selfies to get as many likes as possible.) Stanford computer scientist Dr. Andrej Karpathy surveyed a huge range of photos, examining the number of likes each selfie got; he then divided that number by the number of followers the selfie poster had, and then rated the photo's "success" as a selfie based on that number. He then used those figures to develop a computer program that determined a few of the primary characteristics found in most successful selfies. But if you've spent much time on any social media, they probably won't be too surprising.

If you're a woman, your most-liked selfies will likely obey the rule of thirds (the face only takes up a third of the image), feature your face at the center or the top, showcase long hair, use a filter, and have a border. If you're a man, well, there's essentially no point to posting a selfie: Karpathy's network found not a single man among the top 100 selfies of their study.

2. Men Who Post Selfies Are More Likely To Be Narcissistic Or Psychopathic

A lot of folks believe that selfie-takers are self-centered; but a 2015 study of selfie-taking men between the ages of 18 and 40 discovered that there's actually more nuance to it than that. Men who participated in the study completed two tests — one about how they posted their photos on social media, the other about their personality traits.

Researchers found that there was a definite relationship (among dudes) between editing selfies before posting them and possessing narcissistic personality traits. And if men classified themselves as selfie-obsessed, or seriously preoccupied with how their selfies would be received, they were found to be more likely to exhibit psychopathic elements. It doesn't mean any of your selfie-prone male mates are going to go all American Psycho, of course — it's just one study. But it's certainly interesting.

3. The Impulse To Take Selfies Has Existed For Thousands Of Years

Despite what you may have heard (or been told by disapproving parental figures), the selfie isn't a modern creation that began with the invention of Instagram or the wide-spread popularity of Paris Hilton in the early '00s. The impulse to create self-portraits has been part of human art for a really long time, and art historians have actually been moved to point out that there's not that much difference between selfies and self-portraits like Rembrandt's. Wanting to depict ourselves (even in disguise: Michelangelo hid himself in his last painting, The Crucifixion of St Peter) seems to be a key human impulse, and we'll use whatever technology we can get our hands on to fulfill it.

Why? Dr. Terri Apter, a psychology lecturer at Cambridge, told The Telegraph that selfies have always been about self-definition and image control — particularly when, back in the days of the painted self-portrait, the art form was reserved for the wealthy and the artistic. “People could control the image projected, and of course the fact that the image was on display, marked the importance and status of the person represented.” It's a control thing: when you're in charge of your own image, you can always make sure you're seen in the best possible light, and so have power over the world's perceptions of you.

4. Selfies May Damage Your Real-World Relationships

According to a study done in the UK this October, the quality and quantity of selfies on your social media may actually be alienating you from friends. Why? Because loved ones may see those who post many selfies as competition, or as "unreal."

It seems that people may have an aversion to those folks on their social networks who post a lot of photos of themselves; researchers theorize that it is because we're innately suspicious of people who display a lot of exhibitionism. Posting a lot of selfies with a friend may also negatively correlate to the actual degree of intimacy you share with that friend; researchers found that while posting photos with family was related to support and emotional intimacy among family members, posting many photos with friends was often related to a decrease in intimacy between those friends.

Why is this? Psychology Today posits a few theories about why selfies may be bad for our relationships. One is that lots of selfies place pressure on friends to look camera-ready, which can be stressful and strain relationships; another is that it creates competition for attention in a limited social sphere. Either way, too much obsession with posting selfies with your friends could actually drive your real friends away.

5. Your Favorite Selfie Poses May Reveal Your Personality

A study published in Computers In Human Behaviour this past August found that it's not just the act of posting or editing a selfie that can be revealing about your personality: how you like to pose in one can say a lot about you, too. The study asked 127 subjects to complete a personality test and submit a set of their selfies, and then tried to see if there was any relationship between particular poses and personality types.

What did they find? Duck face was linked to neuroticism and emotional instability, a low camera angle was associated with general positivity, and those who concealed the location of their selfie for privacy's sake tended to be more conscientious. It gets more interesting, too: after sorting through the photos and personality tests, the researchers showed the selfies to a group of observers and asked them to pick out specific personality traits of the selfie subjects, to see of they would note the same personality tendencies that the researchers had found. The observers were basically unable to correctly identify any personality traits based on someone's selfies alone, except for picking out extroverted people. So your selfie may reveal a lot about you...but that doesn't mean that people are necessarily picking up on it.

More like this
I Spent 2 Years Trying TikTok’s Dating Advice
By Kailynn Johnson
How Ovulation Affects Your Sense Of Smell, Libido, & More
By JR Thorpe and Lexi Inks
4 Zodiac Signs That Will Take Forever To Admit They Like You
By Kristine Fellizar
Learning To Love, Not Judge, The Lunchbox Wives Of TikTok
By Esther Zuckerman
Get Even More From Bustle — Sign Up For The Newsletter