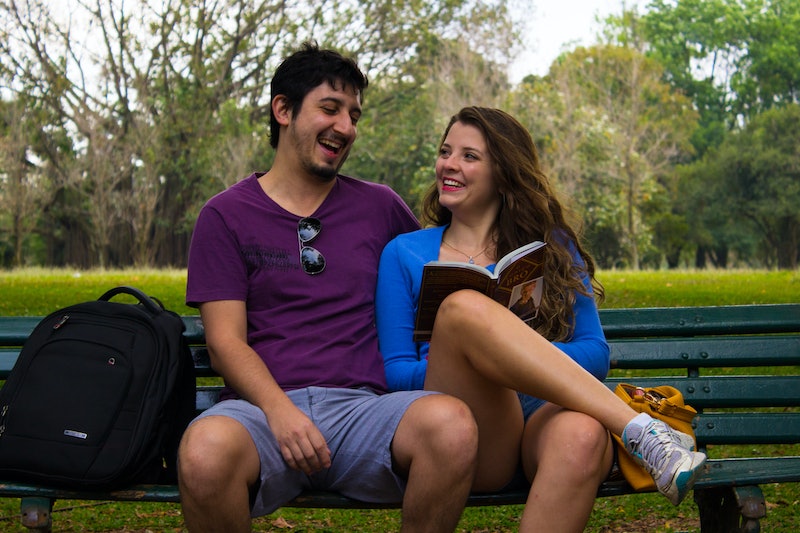 Wedding season (aka: June thru September) might be over, but all that really means is wedding planning season is in full swing. And what better way to spend all these chilly winter evenings than cozied up on the couch with your love, or some of your best gal-pals, flipping through bridal magazines and sketching out the ceremony of your dreams? And selecting your totally feminist wedding readings, of course.

Well, for some less-traditional brides, probably just about any activity sounds better than that (I feel ya.) Except for the offbeat wedding reads, that is. And while it certainly takes all kinds of couples to make the yearly wedding season a smashing success, any wedding that celebrates feminist, girl-power goodness in addition to the joining of two people in love is definitely the kind of shindig I’ll want to party at until dawn.

Whether you’re a bride whose been planning her big day since you dolled up your Beanie Babies and walked them down an aisle of toilet paper, or you and your soon-to-be-wed are just going to wing it, you’ll love these feminist wedding readings from books. They might even inspire you to throw the whole white dress ordeal out the window entirely — you look better in red anyway.

1. “What most people call loving consists of picking out a woman and marrying her. They pick her out, I swear, I’ve seen them. As if you could pick in love, as if it were not a lightning bolt that splits your bones and leaves you staked out in the middle of the courtyard. They probably say that they pick her out because-they-love-her, I think it’s just the opposite. Beatrice wasn’t picked out, Juliet wasn’t picked out. You don’t pick out the rain that soaks you to a skin when you come out of a concert.”

This might be the most beautifully-worded expression of: "I am woman, hear me roar" ever.

2. “Leave the dishes.Let the celery rot in the bottom drawer of the refrigeratorand an earthen scum harden on the kitchen floor.Leave the black crumbs in the bottom of the toaster.Throw the cracked bowl out and don't patch the cup.Don't patch anything. Don't mend. Buy safety pins.Don't even sew on a button…Don't worrywho uses whose toothbrush or if anythingmatches, at all.Except one word to another. Or a thought.Pursue the authentic-decide firstwhat is authentic,then go after it with all your heart.”

— Louise Erdrich, Advice to Myself

So, technically this poem is about championing women to neglect domestic minutiae in favor of pursuing their creative and artistic passions... but it totally applies to marriage too. Plus, try and tell me you're not convinced Louise Erdrich is your soul sister after reading Advice to Myself in its entirety. She rocks.

3. Loving does not at first mean merging, surrendering, and uniting with another person … Once the realization is accepted that even between the closest people infinite distance exists, a marvelous living side-by-side can grow up for them, if they succeed in loving the expanse between them, which gives them the possibility of seeing each other as a whole before an immense sky.”

There's nothing like a little poetry to remind your partner that you'll forever remain a bit of a mystery to them.

4. “Visionary feminism is a wise and loving politics. It is rooted in the love of male and female being, refusing to privilege one over the other. The soul of feminist politics is the commitment to ending patriarchal domination of women and men, girls and boys. Love cannot exist in any relationship that is based on domination and coercion. Males cannot love themselves in patriarchal culture if their very self-definition relies on submission to patriarchal rules. When men embrace feminist thinking and practice, which emphasizes the value of mutual growth and self-actualization in all relationships, their emotional well-being will be enhanced. A genuine feminist politics always brings us from bondage to freedom, from lovelessness to loving.”

― Bell Hooks, Feminism is for Everybody

5. “To love is not to possess,To own or imprison,Nor to lose one's self in another.Love is to join and separate,To walk alone and together,To find a laughing freedomThat lonely isolation does not permit.It is finally to be ableTo be who we really are…”

— James Kavanaugh, To Love is Not to Possess

So, my annual girls' trip to Vegas is still on even though we just tied the knot, mmkay? Thanks.

6. “Love is the ultimate outlaw. It just won’t adhere to any rules. The most any of us can do is to sign on as its accomplice. Instead of vowing to honor and obey, maybe we should swear to aid and abet. That would mean that security is out of the question. The words “make” and “stay” become inappropriate. My love for you has no strings attached. I love you for free.”

Marriage really is all about aiding and abetting. Especially when you need your spouse to tell your mother-in-lay you're not available to come to the phone right now (again) and when they pretend not to notice you ate that entire dessert you ordered to share together.

7. “To marry is the biggest risk in human relations that a person can take. If we commit ourselves to one person for life this is not, as many people think, a rejection of freedom; rather it demands the courage to move into all the risks of freedom, and the risk of love which is permanent; into that love which is not possession, but participation. It takes a lifetime to learn another person. When love is not possession, but participation, then it is part of that co-creation which is our human calling, and which implies such risk that it is often rejected.”

Maybe you'll convince Grandma Nancy to embroider "Not Possession, But Participation" into your throw pillows, instead of that bit about patience and kindness from 1 Corinthians 13.

8. “Love is tricky. It is never mundane or daily. You can never get used to it. You have to walk with it, then let it walk with you. You can never balk. It moves you like the tide. It takes you out to sea, then lays you on the beach again. Today’s struggling pain is the foundation for a certain stride through the heavens. You can run from it but you can never say no.”

Amy Tan is either writing about marriage or that stray dog you knew you shouldn't have fed at the beach. You choose. Although upon deeper examination, marriage and stray dogs probably have more in common than you'd think. Either way, this reading will give your guests something to think about while they wait for cake.

Aka: Jack Nicholson to Helen Hunt in As Good As It Gets. You know you love that scene too.