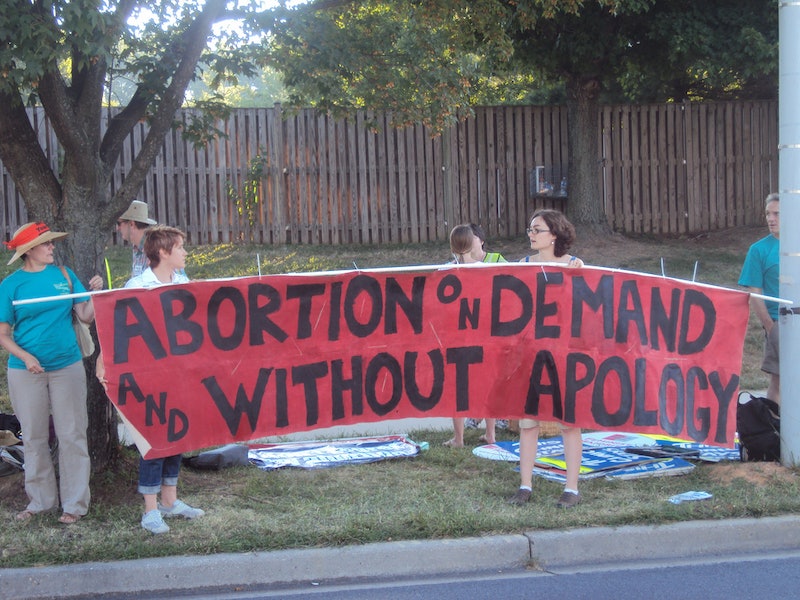 The ongoing battle for a woman's right to choose continues to gain steam, and now one lawmaker is trying to turn the tables: Rep. Mia McLeod, a Democratic member of the South Carolina House of Representatives, recently pre-filed a bill that would restrict access to erectile dysfunction medication in the same way that so many others — largely men — are trying to restrict access to abortion services. McLeod was particularly motivated by the Targeted Regulation of Abortion Providers (TRAP) laws, which restrict women's access to abortions, typically by making them more expensive and less available. She has made clear that she will not stand for such grossly imbalanced terms when it comes to male and female reproductive health care, stating, "I just decided that until they could stay out of my uterus, I would refuse to stay out of their bedroom." McLeod's is the latest bold attempt at eliminating the invasive and often unnecessary laws that legislators have invoked on women's health — because a woman's choice whether or not to get an abortion is nobody's business but her own.

McLeod's bill would impose more stringent requirements for men needing erectile dysfunction medication, including notarized affidavits from at least one sexual partner confirming that there was a case of erectile dysfunction within the last 90 days; additionally, they would be subjected to a 24-hour waiting period before they could receive their prescription — the same 24-hour waiting period that the women of South Carolina are held to before receiving an abortion. Are you scratching your head? Are you utterly confused? Do you find this absolutely, thoroughly, 100 percent ridiculous? Good. You should. It's the most dimwitted thing I've ever heard.

In fact, it's equally as dimwitted as telling a woman if she can get an abortion, and under what circumstances — which is exactly where McLeod's "stay out of my uterus" quote comes into play.

"Those who are adamant about introducing some type of abortion bill every session, that's really what this is about," she further explained to The Free Times, a weekly newspaper in Columbia. Her bill would impose similar legal and medical documentation and requirements, not unlike women who are seeking an abortion experience. Abortion restrictions are getting worse; in fact, since 2011 alone, states have enacted 231 new abortion restrictions. This fact demands consideration of important questions McLeod introduces: What is equal? What is fair? Why the intrusion on women and not men?

It's an even more interesting topic of conversation when you consider the parallels between a man needing medical help in the bedroom and a woman who'd rather not be pregnant. One of the requirements laid out in McLeod's bill specifies that patients seeking ED medication would also have to receive counseling to "pursue celibacy as a viable lifestyle choice" — basically telling men, if you can't get it up, then don't have sex. It echoes an ever-popular argument frequently hurled at women: If you don't want kids, then don't have sex. If it sounds ridiculous in one situation, then why doesn't it sound ridiculous in the other? Spoiler: It's ridiculous no matter which situation you're looking at.

And if you think this is the only parallel that can be drawn between abortion restriction and ED mediation restriction, then let's delve a little further, because other lawmakers have already proven you wrong.

Back in 2012, Rep. Kelly Cassidy of Illinois spoke against a bill requiring women who wanted abortions having to have an ultrasound first by adding one small detail: Men who wanted ED medication would have to watch a rather graphic film about the potential negative side effects these drugs carry. That same year, Sen. Janet Howell of Virginia promoted her own amendment requiring all men wanting Viagra to take a rectal exam. Hooray for rectal exams!

The similarities between the two scenarios are thought-provoking, to say the least; I still find myself wondering why any woman under any circumstance can choose to reproduce, but is not allowed to choose not to reproduce. How can we freely allow men to seek help in maintaining an erection, something that — correct me if I'm wrong — is rather crucial in creating a fetus, but we will not freely allow women to seek help choosing not to become a parent? Why the hands-off approach when it comes to men's reproductive rights, yet the ironclad grip around a woman's uterus and ovaries?

And here's your gentle reminder about the aforementioned TRAP laws, which often require (among other things) that abortions only be done in more complicated and expensive facilities, further limiting the places where a woman in need can turn. ED medication, however? Not sure I've ever heard about similar limitations in this case. Erections! Erections, everywhere!

And let us not forget the current fight to defund Planned Parenthood, too — something that makes my insides shrivel. Let us not forget that Planned Parenthood was also victim to domestic terrorism this year, and a politically charged attack, at that. Let us not forget, additionally, the growing argument that abortion clinics are at high risk for gun violence. Let us not forget the multitude of invaluable services they provide, including birth control and other contraceptives, STD testing, vaccines, and general exams. Because that's all part of the argument, too; the mere fact that these events have happened points directly to the invasion of women's rights to equal health care. Is anyone trying to shut down clinics that write prescriptions for Viagra? Is anyone bringing weapons to doctors' offices with waiting rooms packed full of men with ED? No, and again, no. Why? Because they don't care. Men's sexual health hasn't been a topic of discussion or debate, unlike the sexual health of women, which the government not only seems to think it should be a part of, but thinks it should definitively control.

Last time I checked, creating a baby took at least two to tango, genetically speaking. I guess it only makes sense for the government to start controlling men's boners the way they control women's uteri. McLeod suggests that we take as keen an interest in men's sexual health as we do women's — so let's see what happens when we do.