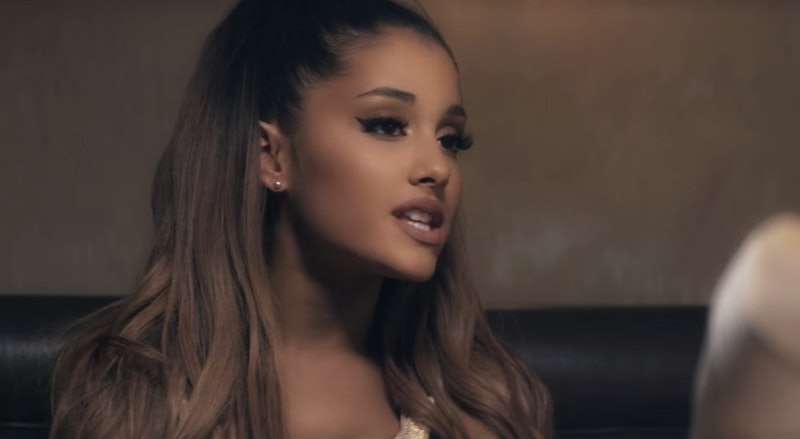 riana Grande can sing, dance, act, and also brilliantly end age-old debates about Star Wars. Well, at least attempt to end them. The singer, whose year has been marked by some less than stellar moments — who can forget the donut incident earlier this year — for all her flaws, has always been a top notch performer. Who knew that she was also a Star Wars fan? In fact, the pop star has used the release of the new film as the perfect opportunity to have some fun. Grande starred in a hilarious Star Wars parody — and, of course, she nails it, by the way.

The singer helps put an end, once and for all, to the question fans have been wondering for years: Who shot first: Han solo or Greedo? The short lived clip features Grande, in her classic white high heeled go-go boots, and two alien creatures arguing over the subject in a cool galactic saloon of sorts. While Grande tries her best to fully answer the question, in the end, she provides the perfect solution to put this debate to rest. It's not the typical Grande that the world is used to seeing, but it's always fun to see celebrities geek out a bit. Luckily, there was enough geeking out to make for one hilarious parody — and here are the best moments.

It wouldn't be a true Star Wars parody without the writing to set the whole video into motion. No such thing as Star Wars unless you have to read something.

This scene marks a throwback to the original movies and the hangout spots fans have become accustomed to. This is a great ode to the hilarious antics that are about to ensue.

There is no debate without the help and guidance of these two creatures. They believe that Han Solo shot first, whereas Grande is trying to convince them that it was Greedo. This hilarious banter goes back and forth before Grande is finally introduced.

The boots definitely make the woman. The classic half up-do that Grande is rocking, partnered with the heels, definitely make her an intergalactic force to be reckoned with.

Grande has a few tricks up her sleeve, or more importantly, a space weapon at her side. Things just got real.

Grande gets the last word in the argument by shooting to kill the two creatures who sit in-front of her. Without so much as the bat of an eye lash, she takes out the competition once and for all, and finally solves the debate — kind of.

The best part comes at the end, when Grande finally ends the debate, and still has time to kick back in those fabulous heels. If that is not true heroism, then I don't know what is.

Ariana Grande fan or not, this parody will have you laughing for days. And it's just in time for the release of the new film, which I'm sure will insight the same reaction in many parts. As always, may the force be with you.