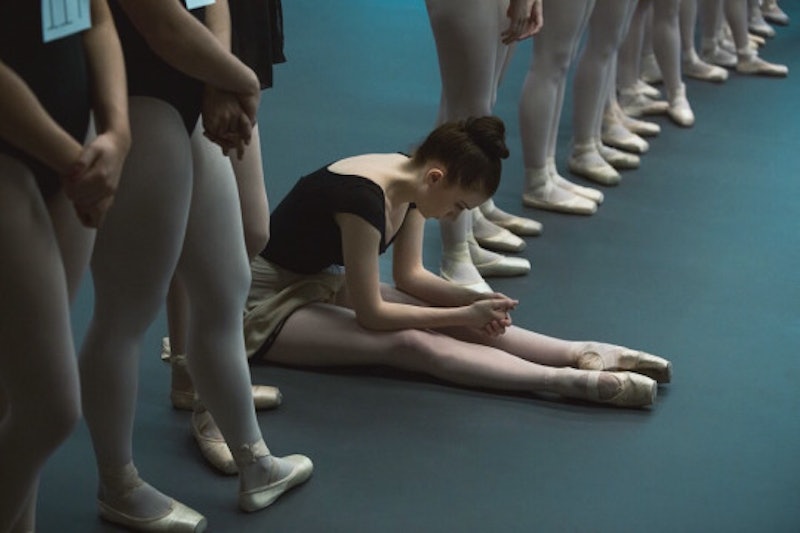 When the 2016 Golden Globe nominations came out earlier this month, there was a surprise: Starz’s limited series Flesh and Bone scored two nominations. Just last week, it followed that surprise with another nomination for star Sarah Hay from the Critics' Choice Awards for Best Actress in a Movie Made For Television or Limited Series. The series generated a lot of buzz earlier this season, even landing on Bustle’s own feminist watch-list, but unfortunately, has for the most part, flown under the radar in the TV cultural landscape. With the season finale airing on Starz this Sunday (though the whole season has been available for streaming on Starz Play), it's time to finally give Flesh and Bone the credits its due for being one of the year's most feminist TV series.

The delicate world of ballet is not a new place for storytellers anxious to find drama. Filmmakers have explored the concept of effortless perfection through ballerinas many times before, most notably in films like Black Swan and Center Stage. It's an activity that demands its participants display elegance, grace, and sophistication, all without a bead of sweat or a tired smile that would give away any of the work that went into achieving it. Beyond that concept, many have also used this impossible duality (perfection without effort; flawlessness without struggle) as a metaphor for the descent into mental illness.

But on Flesh and Bone, the world of ballet is instead primarily used to reflect the world that women inhabit and obstacles they face. The ballerinas of the series are crafted in such a way that they inhabit a very real world that many women can likely relate to, even if they've never stepped foot on a stage.

The Realities Of Periods

Sadly, the mere depiction of young adult women dealing with their periods puts Flesh and Bone strides ahead of other TV shows in terms of feminism. Few shows venture to even acknowledge what many cisgender women deal with monthly (honestly, what were all the women on Lost doing while on that island?). When dramas do mention menstruation, it’s almost exclusively reserved for “first periods” and “missed periods,” as if the hundreds of unsensational periods a woman can experience in her lifetime don’t exist. Other than that, shows frequently use menstruation for laughs (like Larry David attempting to explain how to use a tampon to a teenager on Curb Your Enthusiasm or a 30 Rock sketch about PMS).

But instead of ignoring this common experience like so many other series, Flesh and Bone directly addresses it from the get-go. In one of the first scenes, we see the ballerinas dressing in the locker room, and one asks for a tampon.

“You still get your period?”

“Better shove two up there or you won’t make it through barre.”

This adult woman is first mocked for experiencing what is a very common female occurrence, then she is reminded of the harsh reality that life doesn’t account for it. The biting message behind the exchange is clear. Even in this world, specifically designed to showcase women in their most brilliant femininity, they still must hide aspects of being a cisgender woman.

The first episode continues to explore this juxtaposition, a culture that prides itself on reverence for women but makes no move to accommodate them. When the ballerinas are told they have to attend a gala event, Claire, who has arrived in this new ballet world fleeing a mysterious past, has nothing to wear and attempts to choose a dress from a friend. She holds a white, flowing one up to her body, then tosses it aside saying it won’t fit over her chest. Instead, she selects a tight, black outfit. The message is crystal clear: her breasts won’t fit in the Madonna; she’ll have to be the whore.

Contrasting this delicate and fragile world of ballet is the mobster-owned strip club where Claire’s friend, Daphne, (and eventually Claire herself) works. From Claire’s first entrance into the club's dark world, Flesh and Bone makes it clear that this will be a place of female power. She watches the dancers that night in silent rapture at their command and presence. It is obvious from Claire’s face that she is impressed with the authority these women have over this roomful of men.

But the fantasy doesn’t last. A man pulls on her ponytail to get her attention — attention Claire clearly does not want to give, evident from the beer bottle she smashes over his head.

In both these worlds, where women at first appear to be in control of their own bodies, they actually cannot escape the pressure of male harassment, being touched when they don’t want to be touched and called names they don’t want to be called. It is the willingness to explore these very real and recognizable situations that makes Flesh and Bone such a feminist masterpiece. Many women have either had, or can relate to, these scenes of harassment, and can see the truth in the messages.

Throughout the rest of its seven episodes, Flesh and Bone does not shy away from exploring the reality of what it means to be a woman under the exterior one presents to the world. It presents a frightening reality and experiences that real women, not just fictional ballerinas, can experience in their lives. Because Claire does not fall into madness (as Natalie Portman’s character does in Black Swan), we the audience are forced to deal with these truths, and what they mean for us in the world outside of the ballet company.

Because the story of Flesh and Bone is told through Claire, we see many different ways that women struggle. We see the older woman, terrified of being pushed out of what she loves because she no longer fits the role of wide-eyed ingénue. We see the barely-teenage girl used for her virgin sexuality to the delight of men. We see the "nice guy" become a predator who “smells a virgin” when he turns back to his friends. What could have easily been clichés become truths. Not just truths for the ballet world, but recognizable truths within our own culture that must be dealt with.

We have such a thirst for feminist characters on television, and yet we sometimes miss the quieter ones. And, in real life, that is so often where feminism lies. Sometimes, feminism means tiny triumphs in the face of overwhelming masculinity, battles pitched against a culture so enshrined in patriarchy that we sometimes don’t even notice that it is the only narrative we are receiving. It is this, the willingness of Flesh and Bone to wage its own small war of acknowledgement, reminding us that these issues really do exist in the world for all women, that makes it so exciting to watch. (That and the kickass, “I am woman; hear me roar” ending I won’t spoil for you.)

As the title cards bearing a military slogan remind us at the beginning of each episode, sometimes, whether you’re a perfect ballerina or a regular citizen, it is a war just trying to be a woman in today’s world.