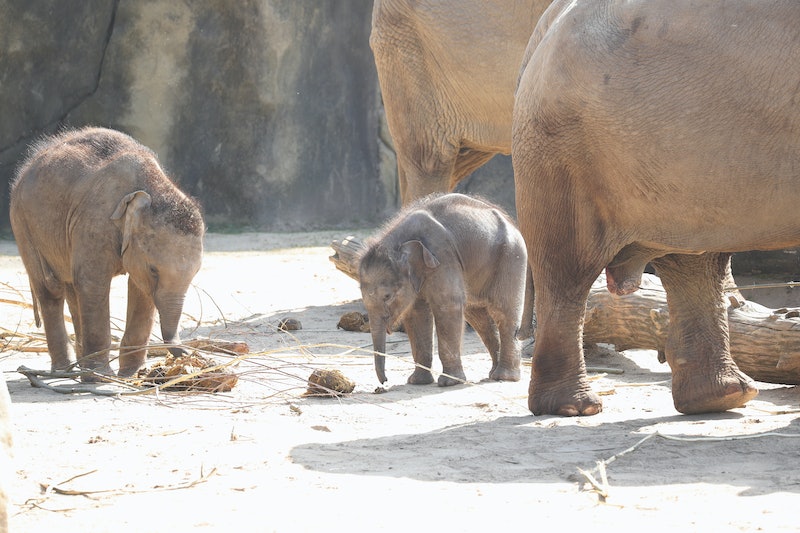 Twitter: It's not just for humans anymore. First the sharks started tweeting and now the elephants are getting in on the fun. Yes, you heard me, there are elephants on Twitter! Praises be to the Internet gods! You know you've only been waiting for this your whole life.

The conservation group Space for Giants has tagged four bull elephants living in Kenya, Kimani, Carlos, Tyson, and Evgeny, and now tweets updates "from" the elephants using the hashtag #ElephantsLive. They hope the tracking project will provide a better understanding of elephant roaming habits, while tweeting will simultaneously raise awareness of conservation efforts and educate the public about elephant behavior.

And also, Oh My God They're So Cute!!

Fortunately, African elephants are no longer considered to be endangered, but they are still classified as vulnerable. Where once there were 3 to 5 million African elephants, today there are only 450,000 – 700,000 still living in the wild, and their natural habitats have been severely reduced. Which is why continued conservation is so important.

Space for Giants is a UK and Kenya based non-profit dedicated to "ensuring that [elephants] have the space and security to live and move freely in the wild forever." They operate primarily in Northern Kenya in an area which has no official government-protected conservation areas, but which is home to a free-ranging elephant population. Their approach includes fighting against elephant poaching and also working with local communities to reduce human-wildlife conflict. And also tweeting. Because clearly someone had the world's most brilliant idea ever.

The tweets are written by Diane Vollmerhausen in the UK who communicates with the organization's members in Kenya to keep up to date on the elephants' movement. The tweets are kept on a slight delay to protect elephants from poachers.

But don't tell me that, I want to believe it's the elephants doing it! I believe in you elephants!

The four Space for Giants elephants began tweeting last week, and so far have been delightful. Tweets range from information on the elephants' backstory:

To updates on their whereabouts:

And maps tracking their recent movements:

Plus, some have pictures. There are pictures of elephants, guys!

You can follow the elephants on Twitter at @SpaceForGiants, or just keep track of the hashtag #ElephantsLive. Enjoy!

More like this
25 Quotes About Love To Share During Pride Month 2022
By Madeleine Aggeler and Emma Garza
How To See The Lunar Eclipse On May 15-16, 2022
By Kaitlyn Wylde
TikTok Is Using A Kendrick Lamar Song To Post Thirst Traps
By Courtney Young
Instagram Users Are Reporting Issues Scrolling & Logging In
By Courtney Young
Get Even More From Bustle — Sign Up For The Newsletter