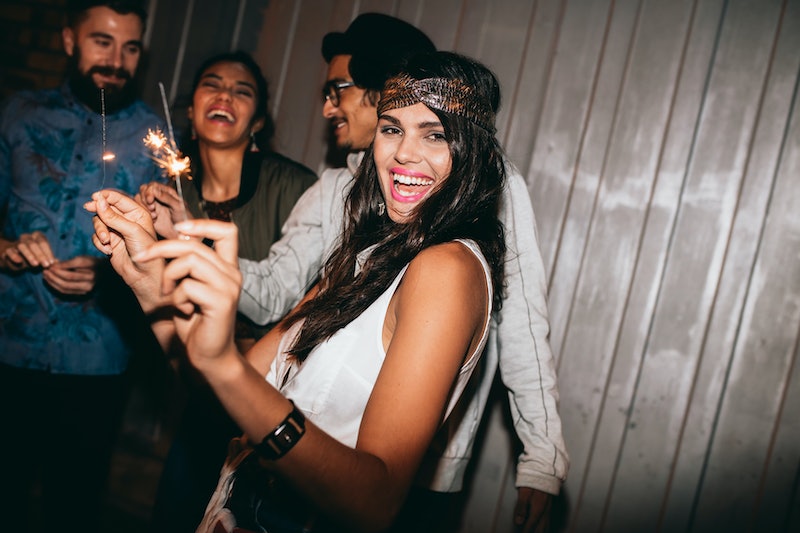 As we rapidly approach the end of 2015, online dating’s place in our romantic lives is totally undeniable. Whether you’re playing Tinder for all it’s worth or still hoping no one discovers your Ashley Madison account, the majority of Americans (59 percent) see the Internet as a great way to meet people to date, according to Pew Research.

But for me, personally? It hasn’t played that big of a role. Sure, I spent a few months on OkCupid back in 2009 after my college boyfriend broke my heart, but I’ve largely stayed away from online dating since then. As a result, my dating history is speckled with meet-cutes, big swings, and major misses. And as a single woman living in major world metropolises, I got really good at meeting people to date in my daily life.

Probably the best example of meeting someone in real life from my own personal history went down on a fall day in Buenos Aires, Argentina. My best friend and I went to go smoke cigarettes and people watch in our favorite park — which is a totally legit, potentially day-long activity for young Argentines. As we walked through the beautiful people drinking mate on the lawn, I caught the eye of a lovely boy practicing his juggling. He had just the right amount of scruff and big, dark eyes that I could already feel myself melting into. He smiled at me — and I was done for.

After pretending not to watch the juggling boy for an hour, my friend and I went to warm up in a nearby coffee shop but I couldn’t get him out of my head. I scribbled out a note with my number on it, gathered my courage, and went back out the park and tapped him on the shoulder. What followed was the most adorable, awkward conversation I’ve ever had before I hustled away, forcing myself not to look back and see if he was still watching me. He texted me later that day and we ended up dating for a few months that fall.

That’s some straight up rom-com nonsense, right? While we ultimately weren’t a great match, I absolutely love the story of how we met and I gotta admit: It’s more creative than “Um, we matched on Tinder?” So if you’re feeling a little burnt out on online dating but aren’t sure how to go about meeting someone IRL, here my top seven tips.

1. Be Bold And Take Risks

All of my major relationships (and most of the minor ones, too) came after I took a bold step. Whether it’s passing a note to the cute guy in the park or not being scared to be the one to go up and say hi at the bar, being bold goes along way. Sure, there will be some misses — there always are. But trust me, those misses are so worth it when you get a “hit.” Also, it’s a total rush to be bold in social situations.

There’s a common understanding among hetero singles that men are supposed to approach women — and not the other way around. If you’re not comfortable approaching someone you’re into either because of the social stigma or just because you’re shy, then you can easily communicate non-verbally that you’re open to being approached.

3. Go To Places Where You Can Interact With New People

But make sure that they’re places that include people you’re attracted to. So, for example, if you’re a heterosexual female, then you probably won’t meet many dudes at a women’s book club, get my drift? (However, you might meet other women who know men who are single who you might be interested in, which is also a great way to meet new folks.) See if there are mixed gender activities in your area if you’re straight or bi and look for gay-specific events if that’s more your bag. A good friend of mine met her husband this way: They played on the same pickup soccer team.

Get. Out. Of. The. House. I’m totally a homebody so I understand the allure of PJs, binge-watching, and a good bottle of red, but you’re not going to meet your dreamboat that way. If you’re single and want to meet people IRL, try your best to make an effort in getting out of the house. The more you’re interacting with people IRL, the more likely you are to meet someone you vibe with, right? Right. So put on your big kid pants and go out!

5. Put Your Phone Away

I know it’s scary to hang out in a bar or at a party by yourself, but if you’re glued to your phone, you are not approachable. You’re also not trying to find other ways to amuse yourself like, talking to people. And this applies to spaces other than bars, too. Put your phone away, take your earphones out, and start interacting with the people around you. You may be surprised by who you find.

A lot of us have an unofficial checklist of what we’re looking for in a partner or hookup, and while those can be helpful at times, it’s also good to be open to people that don’t really match up with our idea of who we "should" be with. This is where online dating may actually be hurtful, I think. We’re more and more able to specify exactly what and who we’re looking for but the reality is that most of us don’t really know what we’re looking for until we find it. So be open to someone who’s a little shorter than you thought you could be into, for example. They just may have other qualities that more than make up for the missing inches.

Whenever someone asks you to do something social, say yes. Even if you’re tired. Even if your PJs and TV really are calling to you. Saying “yes” is something I learned in Argentina that has really, really helped me in new social situations ever since. I’ve met amazing people, seen amazing things, and gone to amazing places that I never would have experienced if I went with my natural inclination to stay in or listened to my fear of new situations. Now, I’m not suggesting that you say “yes” to dates that you don’t want to go on, but rather that you should say “yes” when, for example, a friend invites you to a party or a group is meeting up for dinner. You never know who else might have said “yes” too.