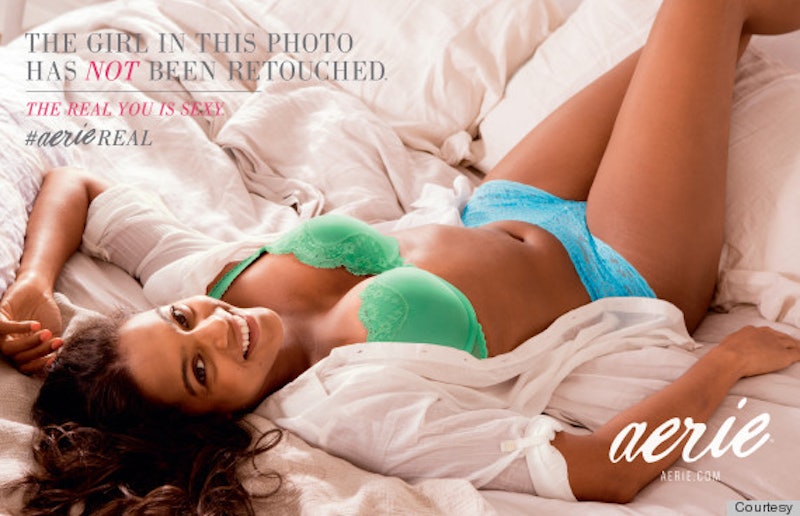 American Eagle Outfitters has announced that their underwear and swimsuit maker Aerie will not be using using airbrushed models in its latest ad campaign – and that they aren't sticking with the industry tradition of only showing B cups. The un-photoshopped ads show a range of bra sizes from A to DD. Brand representative Jenny Altman told Good Morning America, "We left beauty marks, we left tattoos, what you see is really what you get with our campaign." It gives young women a rare opportunity, she adds, to see "what girls their age really look like." Or at least what models their age actually look like. Altman herself admits that "They are still models, they're still gorgeous."

So is this really a a good thing? Well, yes and no.

On the one hand, these images aren't really challenging any beauty ideals. The models are all still thin, still light skinned, and still with conventionally beautiful faces and very European features. Adding cup-size diversity is great, but not quite the same thing as actual size diversity.

And for all the talk about the models' "flaws" being left alone, they don't really seem to have many. Yes, their smiles create lines on their faces – but if we're calling that a flaw then there is something very, very wrong. Overall these images may not be photoshopped, but they are still playing into the same ideals that photoshop strives for.

On the other hand, though, at least these images are real. As harmful as our society's narrow definition of beauty is, it's even more harmful when that ideal is only achievable with digital enhancement. Because when young women are told that our worth is tied to our appearance and our appearances are held to a standard that is literally impossible to achieve in real life it is a huge problem. Aerie's ads may promote an unrealistic beauty standard, but at least it's a possible one. When ads devolve into science fiction territory, nobody wins. Except, I guess, ad companies.

So it's tempting to call this ad campaign a win, it really is. But the sad truth is that the only way this will truly count as a win is if it starts an industry-wide trend. One ad campaign by one company with models who are still thin and conventionally attractive isn't going to reverse years and years and years of photoshopped images pouring into young women's brains.

If this were the start of a move away from photoshopping, it would be something to celebrate. But it's unlikely that it will be. In fact, American Eagle as a whole seems to still be using photoshop for their other clothing divisions. And even Aerie has made no promises that photoshopping won't be part of its ads following this new "Aerie Real" campaign. And judging by the name, all signs point to this being more of a publicity stunt rather than a commitment to changing the way Aerie does business. In other words, they'll probably get a lot of good press, probably turn a handy profit, and then probably go back to photoshop just like everybody else.

Update: Aerie has now stated that they have no plans to go back to photoshop.