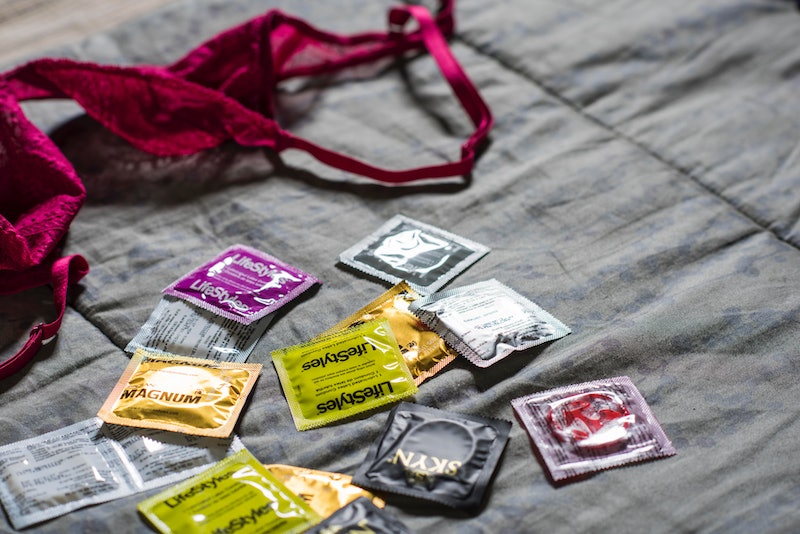 I'm willing to bet most of us think we know how to use condoms the right way. I mean, your first memories of being exposed to sex most likely watching a sweaty teacher put a condom on a banana, whether it's an actual memory or you're just thinking of the reproduction scene from Grease 2 that you watched over and over again because you were as geeky as me. They were also the go-to birth control method for many of us when we were younger— you could get them without a prescription and, unless you ran into your significant other's mother’s cousin (I have really bad luck), it didn't have to be anyone else's business.

Unfortunately, no birth control method is perfect, and that includes condoms. Although they are really great at preventing against some STIs and pregnancy— they're 98 percent effective at preventing pregnancy if you are using them correctly. That’s really high. Remember, that that’s only when they’re be used properly. But how can you tell if you’re getting the most effectiveness out of them? You should always make sure you store them in places that aren’t hot and where they won’t get worn (so yeah, not your wallet), and even when you’ve done everything OK up to the act, you may notice that things seem to be off when you’re using a condom.

Here are seven signs your condoms aren’t effective as they should be, because you want to get all 98 percent out of them:

1. You Haven't Checked The Date

If you’re using that condom that’s been chilling out in your bedside drawer for forever, it may not be effective. I’ve had to throw out dozens of condoms that I didn’t get around to using because they were expired. You have to be realistic, even it means some wounded pride like admitting you're in the world's longest dry spell (I was).

2. It's Not Rolling Down Easily

If you’re struggling to roll it on, chances are something’s wrong. The National Health Service website says “you're probably holding it the wrong way round. If this happens, throw the condom away because it may have sperm on it, and try again with a new one.”

3. It's Moving And Leaking

Not all condoms work for everyone, and it’s not just a matter of size. If you have a rash, itching, or just general discomfort that doesn’t seem quite normal, you may have an allergy. Bedisder points out that “latex allergies are rare, but they happen. If you or your partner are allergic to latex, there are non-latex polyurethane condoms you can use to protect against pregnancy and STIs." Another option? Lambskin condoms. They prevent pregnancy but not STIs.

It’s not a rookie mistake— it can happen to anyone. When you open a condom it’s really easy to accidentally tear it a bit, especially if you have a a tough grip of it because of nerves… or anticipation. In fact, it’s always worth giving it a quick check and making sure it’s not torn— WebMD adds you should toss the condom if it's brittle or sticky.

6. It’s Only Appearing For the Grand Finale

So many of people do this: Putting on the condom only for actual, penetrative sex. Hell, I’ve even only used it to slow a guy down a bit. I’m not proud of that. As Buzzfeed points out, skin-to-skin genital contact can lead to STIs, so it's best to put it on and keep it on from beginning to end. Unless your condom is involved the whole time, it’s not as effective as it should be.

It's awkward, but it happens. If you weren't paying attention to your condom slipping and sliding around during sex, there's a chance that it will slide off completely and get stuck inside you. I know, it's not romantic, but true love is someone sticking their fingers inside of you and fishing out a condom while you say, “Oh my god, oh my god!” — and not in the good way.

To avoid this, make sure it fits and is fully rolled down. The National Health Service recommends that your partner pulls out after they've ejaculated and before the penis goes soft. To prevent it from getting stuck, they should hold it in place when pulling out.