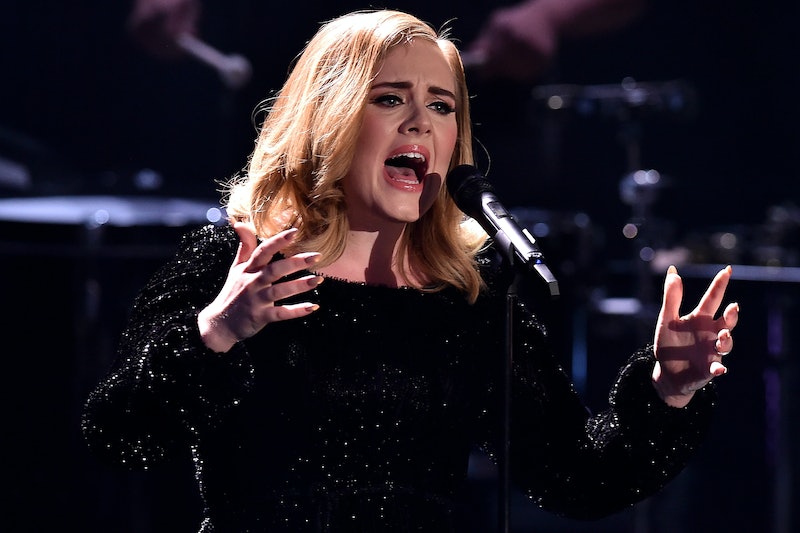 On December 14, while we were all minding our own business, Adele announced her North American tour dates to the world, and, if you're a serious Adele fan, you probably went through a series of emotions upon hearing the news. But, now, it's time to get down to business. With the tickets going on sale on December 17, how much should fans expect to be emptying their wallets just to hear her lovely voice in person? Exactly how much do Adele tickets cost? Well, the good news is that the prices seem to be pretty average compared to what I would expect from buying tickets to, well, any concert. In fact, seeing the dollar signs in front of me as I stare at Ticketmaster really doesn't phase me at all! (Or maybe I'm just so desperate to see her in concert that I'm willing to pay anything. Who knows?)

As of right now, the approximate ticket range for Adele's 25 North American Tour is listed as $37.45-$147 when it comes to her first stop at the Xcel Energy Center in Saint Paul, Minnesota. Then, when looking at larger markets and arenas, such as New York City's Madison Square Garden, the price for Adele's lovely voice live ranges anywhere from $95-$149.50. Not too bad, right? (Although just watching her Live In New York City concert replay is obviously a lot cheaper.)

However, that just doesn't cut it for us Adele fans. We need to hear her say "Hello" to us directly and bawl our eyes out — even if non-Adele fans don't seem to understand (Wait, do non-Adele fans exist?). Anyway, if you're a serious Adele fan, you're probably planning on dropping some money on this tour. And, as it always is among concert ticket-buyers, the cost of seeing Adele in concert can (and probably will) go up due to numerous other factors, including the purchase of one or more Adele t-shirts, food and beverage costs inside the arena you're going to, transportation costs. There may even be extra ticket packages, since it does cost extra money if you actually want to go backstage and meet Adele in-person (I think I would actually pass out).

But, for now, the important thing is to keep your eye on the prize. And just getting a seat in what is expected to be a sold-out tour will be more than enough.