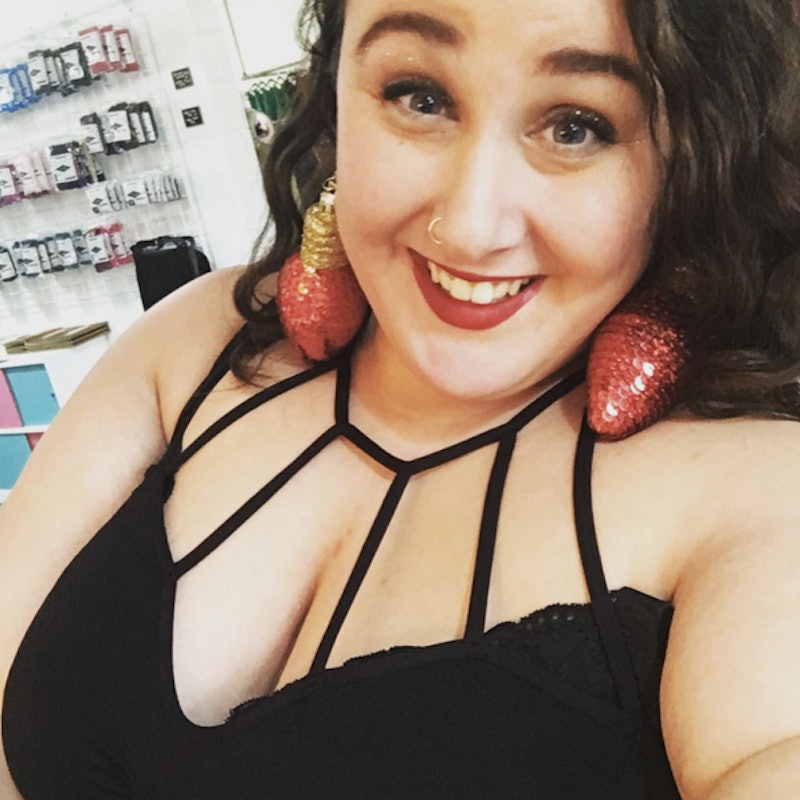 The new year is a time for resolutions. But for those who have broken up with diet culture or who want to break up with diet culture, there's also an extra need for everyday body positive mantras and affirmations. During this time of year, advertisements bombard us with messages about how we are supposed to do things differently come January. New year, new you, right? Resolutions are all about change, and there's nothing necessarily wrong with change itself. The issue is the message that says the current you is broken, and that that's why you need the change. And ultimately — no matter how well-intended — any mantra that implies you can only be great if you change yourself is inherently flawed.

An additional problem for me is that there's no specific time of year during which we are encouraged to celebrate the things that make us wonderful just as we are without having to change a thing. It can be difficult to stay body positive and not fall for self loathing-inducing diet culture traps during the holidays. But it's also important to remember not to body shame anyone else in the process of your own self love journey.

Some things that we think are body positive mantras might actually be putting others down instead of celebrating all bodies. So let's be mindful of the messages that we tell ourselves and others this new year that aren't quite so body pos.

I understand that the mantra "real women have curves" is supposed to be empowering for women who fall outside of, let's say, the waif model norm. However, it's super important to note that those models and women who look like them are still real. All women are real.

So if you have curves, if you have rolls, if you have no hips, you are no less real. "Real" is just another word used to police bodies and enforce beauty standards. Let's stop using this phrase, which is only a way to build some women up by tearing others down.

I kept seeing this gorgeous image shared on social media in November, but every time I saw it, I couldn't help but notice that the caption said "no skinnies." While I certainly advocate for more visibility of fat bodies, I don't think that pitting body types against each other is productive. Body positivity is for all bodies. So while there's nothing wrong at all with this photo, it's crucial to remember that being body positive isn't about praising one body type as being better than another. Even if you're doing it because said body type receives less praise on a larger social level.

Much like "no skinnies," saying "fuck skinny bitches" isn't body positive or empowering for people of size. While there are privileges that need to be acknowledged when it comes to size politics, there is no size limit on who is allowed to own their body or have love for it. So while we need to see a wider range of bodies shown in media for sure, this message doesn't need to be attached to it.

In the recent #AskLaneBryant Twitter chat, Lane Bryant fielded questions about everything from its clothing options to leadership positions. One thing that was called into question by many was the #PlusIsEqual Campaign. While Lane Bryant has said on multiple occasions that it wants to empower all women, I think that using a phrase with the word "equal" while also only representing one body type in images is dangerous messaging.

"Plus Is Equal" is a phrase that's become popularized since this campaign, but it doesn't address the fact that certain bodies are still not given any visibility at all, even as body positivity continues to grow in mainstream popularity. Plus size individuals simply aren't given equal options or visibility like their straight size counterparts. Something like "All Bodies Are Good Bodies" would better encompass the idea that there's nothing wrong with being on any size of the plus size spectrum.

Here's the problem with this tweet and the "Drop The Plus" campaign in general. The idea here isn't that all bodies are good bodies. It's that bodies that are closer to the norm (straight sizes) don't want to be associated with those that aren't (sizes 22 and above). Personally, I take issue with this.

We can't act like all bodies are treated the same in society, even if they should be. This phrase isn't empowering if it glorifies some bodies at the expense of others. Stefania Ferrario, the founder of Drop The Plus, even tweeted, "It's important to love yourself, but it's also important to be aware. You can't be healthy at every size. #HAES is a dangerous message." This sounds a lot like body shaming and health concern trolling to me.

6. "A Fit, Healthy Body Is The Best Fashion Statement"

I was also pretty disappointed to see the mantra "You Earn Your Body" appear in the same Google search. This mantra is dangerous thinking for so many reasons. But most of all, the thought that your body is something you "earn" encourages the idea that your body is only OK if it's in transition to something else.

So stay body positive during the holidays and into the new year, but be mindful of the sort of messages you should leave behind in 2015.

Want more body positivity? Check out the video below, and be sure to subscribe to Bustle’s YouTube page for more inspo!

More like this
Berriez Founder Emma Zack On Her Size Inclusive NYFW Show
By Dominique Norman
The Best Plus-Size Looks From New York Fashion Week
By Dominique Norman
The 12 Best Strapless Bras That Won’t Slip & Fall Down
By Audrey Williams and BDG Commerce
Confused About Blush Placement? This TikTok Makeup Hack Will Help
By Olivia Rose Ferreiro
Get Even More From Bustle — Sign Up For The Newsletter