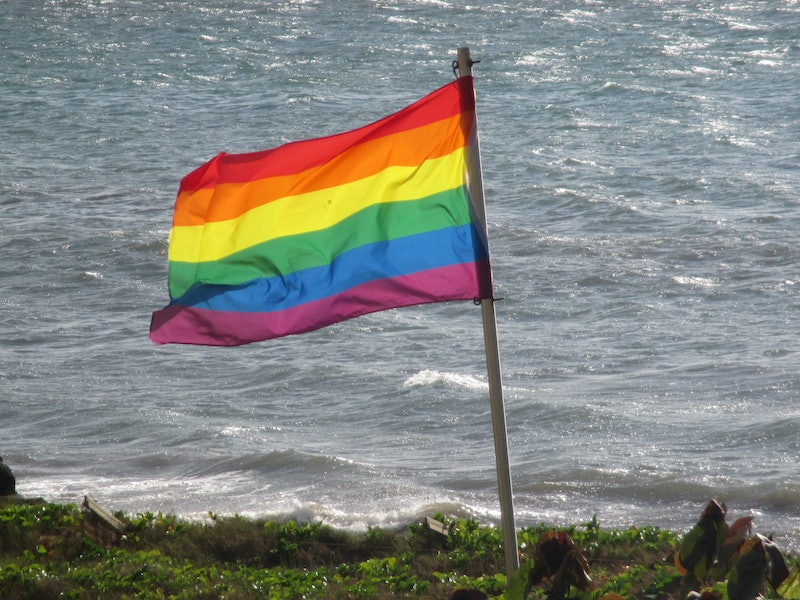 The holiday season may have flown by in a haze of eggnog, spiked hot chocolate, torturous office parties, and more eggnog, but there's still time to donate to a transgender nonprofit before the end of 2015. If you're able to give back to the community this year, there are dozens of LGBT charities that could use the help. Unfortunately, most of us can't afford to donate to all the nonprofits we'd like. Especially after all the eggnog, because that stuff is delicious but hella expensive.

But I digress. We've already discussed the most inclusive LGBT charity of the season, followed by which nonprofit benefits lesbians the most. Today, let's take a look at which organization to focus on if you want to aid the transgender community — because let's face it, they could use the help. Transgender individuals still face some of the most violent and pervasive discrimination in the LGBT community, and they endure disturbing mental health problems at a rate second only to bisexual individuals. Housing discrimination plagues the transgender community to this day, leading to a disturbing amount of homeless transgender youth.

Fortunately, an increasing number of nonprofits are doing their best to combat this discrimination: Camp Aranu'tiq, a summer camp for trans and non-gender conforming youth; the Jim Collins Foundation; the Transgender Law Center; and countless other LGBT organizations. However, the National Center for Transgender Equality (NCTE) is one of the most well-known LGBT organizations in the nation for a reason. Let's take a look at why it's one of the best places to donate.

The NCTE was founded by transgender activists in 2003, and in the years since, it's become one of the leading trans advocacy organizations in the nation. Past victories have included advocating legislation allowing trans people to update their IDs, organizing the first Congressional hearing on trans issues in 2008, and lobbying the U.S. State Department to allow trans individuals to update their passports. The organization also received the American Psychological Association's Clarity Award in 2012.

What Does It Do?

The NCTE largely focuses on advocacy, lobbying politicians on a wide range of issues such as trans health, aging, homelessness, and immigration, and the NCTE blog is a goldmine of trans news and ways to effect change. The NCTE also created the Trans Legal Services Network to aid trans individuals in need of legal aid.

Furthermore, in 2011, the organization teamed up with the National LGBTQ Task Force to release the first National Transgender Discrimination Survey, and the NCTE is currently working on a second iteration to see how things have changed.

Where Does Your Money Go?

The NCTE publishes tax documents, as well as reports on its progress, annually on its website.

How Do You Donate?

Head over to the NCTE website, where there's a red donation button at the top right corner.