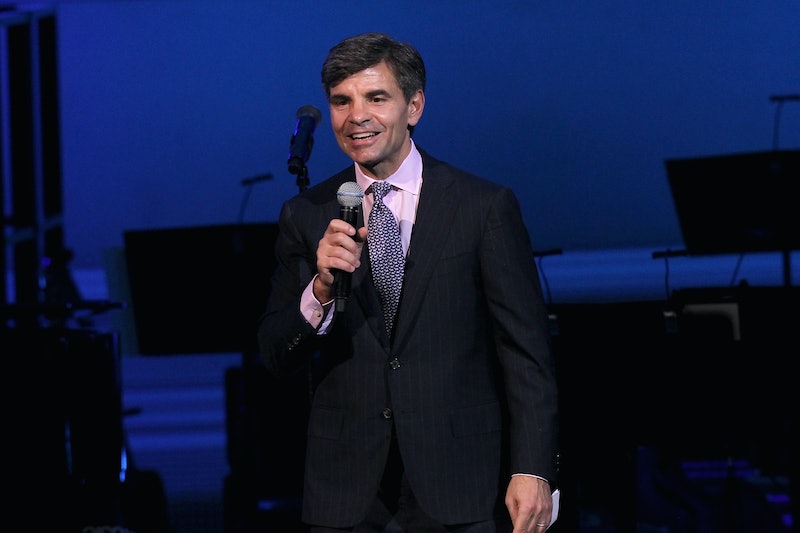 George Stephanopoulos won't be moderating ABC's Democratic presidential debate on Saturday — despite being the network's head anchor and political correspondent. It's not because David Muir's hotter (although he is) or because Martha Raddatz killed the VP debate back in 2012 (although she did). It's because of Stephanopoulos' contributions to the Clinton Foundation, totaling $75,000 over three years: 2012, 2013, and 2014.

News broke in May that Stephanopoulos had made the donations and failed to disclose them to ABC, even though he had covered the foundation, which was started by former President Bill Clinton, when interviewing author Peter Schweizer about his book Clinton Cash.

Stephanopoulos did not benefit financially from his donations, but it did sully his image as an impartial journalist. Some Republicans — like presidential candidate Sen. Rand Paul — called for him to be banned from all debates this election cycle, and Stephanopoulos eventually recused himself from Republican debates. Thus, it's no wonder he was not ABC News' top pick for the network's debate in New Hampshire.

In his apology, Stephanopoulos maintained that his donations were "for the best reasons." He told Politico's On Media blog in a statement that he made his donation because of the work the foundation was doing on AIDS prevention and deforestation around the world, causes he said he cares deeply about. In a later interview with the blog, he said:

At the time I did not perceive the problem, but in retrospect, as much as I support the very good work that's been done by the foundation, I should have gone above and beyond any guidelines to make sure that there wouldn't be any appearance of any conflict.

ABC News stood by their GMA host at the time, calling his lack of openness an "honest mistake." They took no punitive action against him at the time. The choice to go with Raddatz and Muir, though, is surely a reaction to the controversy.

Even though his May recusal was only with regards to Republican debates, it speaks to the situation at the New Hampshire debate. "I won't moderate that debate," Stephanopoulos told On Media. "I think I've shown that I can moderate debates fairly. That said, I know there have been questions made about moderating debates this year. I want to be sure I don't deprive viewers of a good debate."

In any case, Stephanopoulous' connections to the Clintons spans further than the donation and goes back decades. He worked on Bill Clinton's 1992 election campaign and went on to work at the White House during the Clinton administration. He left the administration after the 1996 election and went on to write a memoir on his experience called All Too Human: A Political Education in 1999.

Given his connections and donations, it's probably good that Muir and Raddatz will be taking charge on Saturday. And if you really need some Stephanopoulos political talk, you can always tune into ABC's This Week on Sunday morning.