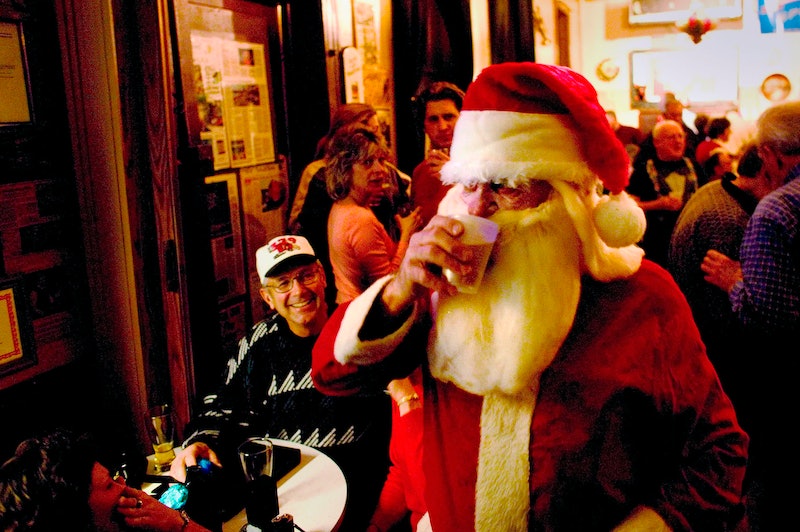 Why exactly do we wish one another a merry Christmas instead of a happy one? Linguist Arika Okrent, with the help of illustrator Sean O'Neill, explain why we say Merry Christmas in an intriguing and fun (I promise, linguistics really is fun!) video. It turns out the specific turn of phrase has a long history, making it rife with meaning.

If you're wondering what to talk about with your family over uncomfortable holiday visits, the linguistic history of the word merry might a good place to start. The winter season, after all, is the time when a lot of people have some very strong about opinions about the holiday spirit. There are some pretty divisive topics related to Christmas cheer, and just over half of Americans believe there is a war on Christmas, so it's risky odds to bring that topic up over brunch with your in-laws. Personally, I think linguistics is a way more interesting way to approach the subject of Christmas and hey — you'll get to talk about the Victorian era, King George, and Charles Dickens. Look at you, smarty pants! Even if your family doesn't find the linguistic effects of Victorian literature quite as interesting, it's at least less likely to be met with hostility around the dinner table.

Did you ever pause and notice we only say "merry" in regards to Christmas? As Okrent points out, we use "happy" to describe every other holiday and celebration, ranging from birthdays, to New Year's Eve, to other religious celebrations. And let's be real: Can you imagine wishing someone a Merry Talk Like a Pirate Day? Probably not.

Well, Wait. What's the Difference Between Happy and Merry, Anyway?

Happy, Okrent explains, is an emotional condition. Okrent states that merry implies some "specific sorts of merry-making behavior," which, if you're like me, doesn't clear up the distinction too much. Worry not; Okrent herself admits the distinction is a matter of connotations of the word, not literal meanings. Merry implies a more "active" showing of the happiness, such as shaking a leg or pouring a drink — maybe even tapping your heels together. (The more you know!)

Merry, an older word than happy, used to mean just "happy," or even the tamer "agreeable." Happy, on the other hand, meant fortunate (which is likely why wishing someone a Happy New Year originally made sense). Now, this is where things get interesting: at one point, people were using both merry and happy as adjectives for Christmas. In the 18th and 19th century, the use of merry on the individual level began to decline, but carolers, as well as Charles Dickens, stuck with merry. And because this Victorian image of Christmas came to define our Christmas customs so strongly, Okrent explains, we Americans stuck to this usage of merry.

Yeah, Dickens is a Pretty Influential Guy. But Why Didn't the British Stick with Merry, As Well?

Sometime in the 19th century, Okrent explains that in Britain, happy took on a very "high class" sheen, and was viewed as more serious and somber. King George himself even used the phrase "Happy Christmas" in the first ever Christmas radio address (and what's more official than that, am I right?). Merry, on the other hand, took on a more down to earth, informal vibe, leaning towards fun and voracious rather than somber contemplation.

Of course, as Americans, we stuck with the more sentimental, fun-loving option: merry. So basically, we wish one another a merry Christmas because we're sentimentalists who love Dickens and are a little rowdier than our British counterparts. Who knew?

More like this
25 Quotes About Love To Share During Pride Month 2022
By Madeleine Aggeler and Emma Garza
81 Epic Truth Or Drink Questions To Play 'Say It Or Shot It' With
By Bustle UK
Are Gemini & Gemini Compatible In A Relationship?
By Kristine Fellizar
The Case For A Hard Launch Summer
By Morgan Sullivan
Get Even More From Bustle — Sign Up For The Newsletter