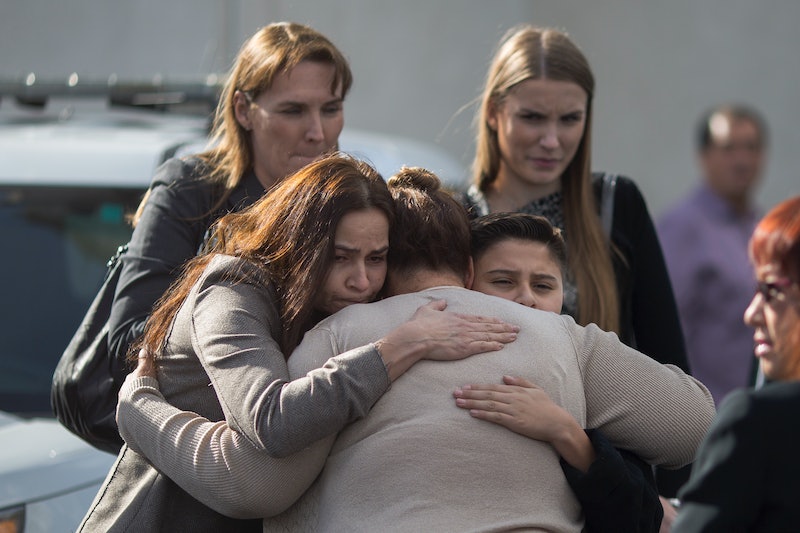 A man identified as one of the San Bernardino shooter's neighbors has been arrested and charged by the FBI on terrorism charges, ABC News reports. Enrique Marquez, 24, is in custody and is charged with material support for terrorism, straw purchase of firearms, and visa and marriage fraud. He is reportedly cooperating with authorities.

Marquez is a friend and former neighbor of Syed Farook, who shot and killed 14 people in December with his wife, Tashfeen Malik, at the Inland Regional Center in San Bernardino. While Marquez denied having foreknowledge of the San Bernardino plot, he did say that he purchased two semiautomatic rifles for Farook years ago, according to CNN, and that he and Farook had plotted, though not carried out, a different terror attack years ago.

Farook and Marquez lived in the same neighborhood in Riverside, California. According to The New York Times, Marquez converted to Islam in 2007, and by 2011, had become close friends with Farook. The two were both reportedly fans of Anwar al-Awlaki, the radical, American-born Islamic cleric with al Qaeda ties who was killed in a U.S. drone strike in 2011, and Marquez said that he and Farook used to build pipe bombs together — though he denies that these were the same pipe bombs found in Farook's home after the San Bernardino shooting.

Marquez was a security guard at Wal-Mart until his license expired last year. He told investigators that he and Farook had dreamed up a plan in late 2011 that would have involved attacking both Riverside Community College and the eastbound lanes of State Route 91 during rush hour with machine guns and pipe bombs. He says they scrapped this plot after three men in nearby Inland Empire were arrested on terror charges, which spooked Farook and Marquez.

Officials say that Marquez purchased the two AR-15 assault rifles, one in 2011 and one later, and gave them to Farook without reporting the transfer of ownership; that's the "straw purchase" charge. Additionally, in 2014, Marquez married a Russian woman whose sister is married to Farook's brother. Friends say that Marquez had described this as a sham marriage, carried out solely so that the woman could gain U.S. citizenship, which is why Marquez is also being charged with visa and marriage fraud.

After the San Bernardino shooting, Marquez checked into a mental health facility. He's waived his Miranda rights and has reportedly been cooperating with investigators. However, Officials told CNN that they haven't been able to corroborate much of the information Marquez has given, specifically the notion that he and Farook had planned earlier terror attacks.