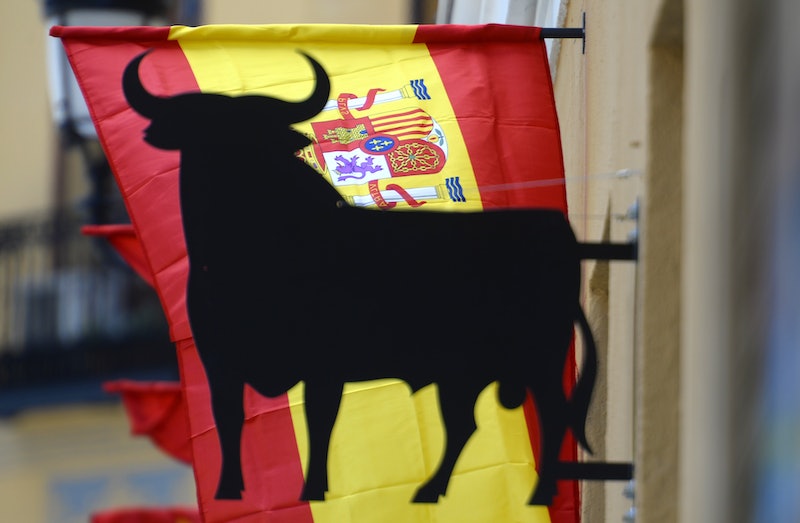 As crazy as the American presidential primary seems, you'll never believe what just happened in Spain. Frustrated Americans yearn for change and mistakenly pledge their support for the likes of Donald Trump. In Spain, one member of the electorate took frustration with the current conservative party into his own hands — quite literally. Spanish Prime Minister Mariano Rajoy was punched in the face by a 17-year-old at a campaign event Wednesday night.

The teenage attacker approached the Spanish leader while he was surrounded by a crowd of supporters, reportedly under the guise of wanting to take a selfie with the politician. But suddenly he wound back for a mean sucker punch to the left side of the prime minister's face. Video caught the Mortal Kombat move on tape. The hit broke the Popular Party candidate's glasses and left a huge red mark and bruise.

Spain, at this moment, is in many ways even more polarized than the United States. The current conservative government has tried to outlaw abortion, shutdown Google News, and limit political protests with a "gag law." The old-guard conservative party that Rajoy leads, the PP, also hasn't played nice with the region of Catalonia, which keeps threatening independence. Rajoy in particular has been singled out by young people as responsible for many of the nation's problems, among them youth unemployment that nearly reaches 50 percent. In an April poll, Rajoy was shown to be even more disliked than the country's former fascist dictator, Francisco Franco.

Voters across the European nation of 47 million head to the polls on Sunday. For the first time since Spain transitioned to democracy in the late 1970s, the political landscape has more than two main parties close to winning power. The PP and the center-left socialist workers party, the PSOE, have taken turns controlling the government, often repealing many of the laws passed by their competitors (the PSOE is responsible for many of the country's socially liberal legislation, including its third-in-the-world passage of gay marriage).

Now, though, there are four main contenders. Two emerging parties are threatening the two established parties. The last polls show voters are fragmented with the parties Podemos (We Can) and Ciudadanos (Citizens) each reaching slightly less than 20 percent of support. Any government will likely be a coalition since no one party is close to receiving an absolute majority.

Rajoy has come under increased criticism during this tumultuous political season. People generally don't like him. An early December poll placed his approval ratings significantly behind all other big-time party leaders in the running to be the next prime minister. Pile on top of that his refusal to debate his competitors and the undercurrent of frustration starts to make sense.

Whatever the voters decide, the young assailant is proud of his actions and said he would "of course" do it again. The prime minister, on the other hand, would probably prefer he not.