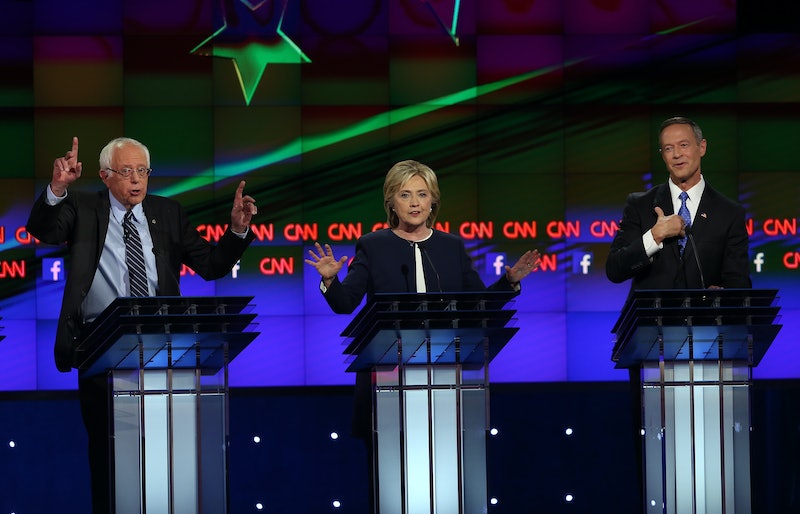 The third Democratic debate of the 2016 cycle is coming up. I know, it feels like there’s been a nonstop barrage of these things for months, but there’s a light at the end of the tunnel, because this is the last debate of the year. Still, those of you who are excited about it will be counting down the minutes until it ends, so we can put aside politics and enjoy the holidays. On that note, how long is the third Democratic debate anyway?

According to The New Hampshire Union-Leader, the next Democratic debate will be two hours long. That should be taken with a grain of salt: At the last Democratic debate, which aired on CBS, the moderators and candidates wrapped up so quickly that the network ended the event early. Even so, the projected two-hour running time will help ensure that the debate is orderly and incisive, mainly because it will give the candidates plenty of time to speak.

That's a far cry from the Republican forums, one of which ran over four hours if you include the undercard debate that preceded the main event. The discrepancy between the two parties’ debate lengths shouldn’t be a surprise. The Democratic field, even at its peak, only had five candidates, while there are still 14 Republicans running for president, including at least one you probably forgot existed.

As a consequence, the Democrats have much more time to speak at the debates than any of the Republicans do at their forums. That’s a good thing for Democrats. Better to give the candidates ample opportunity to discuss and defend their policies than force them to scratch and claw at each other for every second of speaking time. As the past GOP debates have shown, the latter approach often results in an incoherent mess.

Similarly, there are only six Democratic debates scheduled for the 2016 cycle, compared with twice that number for Republicans. This, too, is a boon to Democrats. They have ample time to prepare for each forum, while the Republicans are more or less forced to be in perpetual debate prep mode for the better part of a year, which detracts from other important campaign activities.

When candidates are given lots of speaking time at debates, it forces them to hone their policy pitches to voters, be ready for tough challenges to their platforms, and in general, do the kind of things that anyone should do if they want to be elected to the presidency. This is why the first two Democratic debates went so smoothly, and you should expect to see another orderly, informative debate on Saturday.