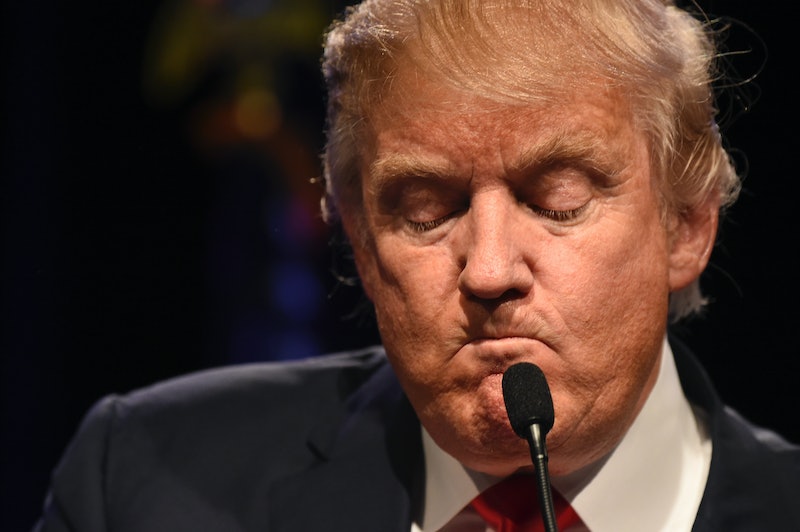 Barbara Walters's conversation with GOP frontrunner Donald Trump on Thursday's 10 Most Fascinating People special may have been quick, but Trump didn't fail to squeeze as much as he could into those few, previous minutes of interview. What else would you expect? Trump never fails — that's just a fact. And in his sit-down with Walters, Trump made some sexist remarks about Hillary Clinton.

In response to Walters asking the presidential hopeful to elaborate on whether he had said Clinton "has no energy," Trump was quite willing to give more than a "yes."

"She doesn't have the strength or the stamina," Trump told Walters.

Hmm... OK. I'm inclined at first to respond with a big, fat "How dare you?" since Hillary has been running the political game for almost as long as Trump has been running the entrepreneurial one. Trump joined his father's company in 1968, gaining control of the company and renaming it The Trump Organization in 1971. Clinton has been involved in politics since she earned her J.D. from Yale Law School in 1973, starting out as a congressional legal counsel and making her way to her current presidential campaign. And she doesn't exactly look worn out, does she? She was a first lady, a U.S. senator, and she served four years as secretary of state to President Obama.

Yes, Trump has made statements on pretty much every other candidate's lack of strength, intelligence, and ability to run the country in general. While Jeb Bush might be a nice guy in Trump's eyes, Jeb just doesn't have the toughness that Trump sees in himself. Trump also decided to make the claim that opposing candidate Ben Carson just "doesn't have the temperament" for being president. "It's not his thing," Trump said. And if Trump said it, it must be true.

But that wasn't all Trump had to say about Hill's apparent weakness.

"If you look at Hillary, she'll do an event, and then she goes back home and she sleeps," Trump said. "You don't see her."

Right. So Hillary's the only politician who sleeps at night? I wasn't aware that, under Trump logic, sleep is another thing that makes one a loser. I guess I should have known better, since Trump has personally touted that he only sleeps three to four hours each night. That's how he beats everyone at everything ever.

While this is probably yet another case of Trump verbal diarrhea, it's hard not to get a sense that these comments imply that Hillary being a woman just makes her a bit weaker than the rest of 'em. If only Walters had riddled Trump by suggesting that Hill doesn't need to stay awake for 20 hours each day to get the job done.

Walters, at least, corrected Trump and said that he actually couldn't know for sure what Hill does after she makes her exit from an event. Go Barbara.