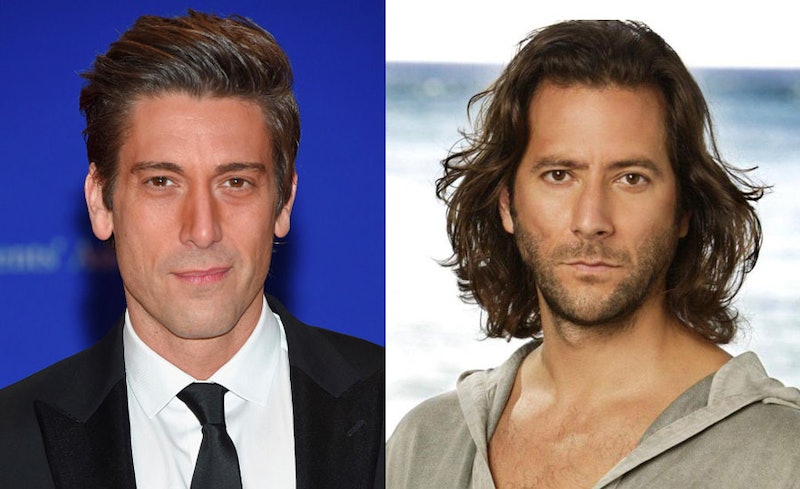 The upcoming Democratic primary debate on ABC doesn't have a whole lot going for it. It airs on a Saturday, the event will be overshadowed by a major holiday, and viewers have heard from all three candidates before. But what the primetime round does have going for it is moderator David Muir, ABC News' nightly news anchor, a man who happens to have similarities aplenty with another ABC darling. The only catch is that the guy Muir twins with is fictional. Here are seven ways Muir and Desmond Hume from Lost are pretty much the same person.

The likeness doesn't only lie in the two men's appearances. It's also in their positive outlooks on life, including never-give-up attitudes that would make anyone believe either man could save the world. Oh, and that willingness to travel far and wide (and through time) to find out the truth — that's there, too.

Disclaimer: Desmond has been and always will be my favorite character from Lost. There's nothing about him that's not perfect and the fact that finding similarities between the fictional Desmond and the news anchor/debate moderator may be a sign of my undying search for a real-life Desmond should be noted.

1. Their Faces Are Practically Identical, When Desmond Is Clean-Shaven

OK, so they're not exactly twins. But when Desmond makes an appearance sans scruffy beard and scraggly locks, his face does look pretty similar to Muir's.

2. They've Been Misunderstood By Others

On Lost, Desmond wasn't received with open arms by everyone on the island — they had been trained to pretty much not trust anyone by that point. Likewise, Muir has faced a bit of rejection. In September, Muir was allegedly nicknamed "Anchor Monster" by others on the ABC News staff for being too competitive with other networks.

Muir has been all over the world, reporting on events in East Africa, South America, East Asia, the Caribbean, and the Middle East, among other regions. Desmond's traveling was of a somewhat different kind. The Scotsman experienced time travel more times than he'd care for as a result of electromagnetic radiation on the mysterious island. This allowed viewers to see Desmond in 1996 in all his beardless glory.

Desmond found the special someone and was never afraid to tell anyone of his eternal love for Penelope Widmore. He had to go years and years without Penny by his side, though, as he tried to deal with the small obstacle of being stuck on an island that no one knew existed. Whoever is Muir's love interest is a secret. If Muir has a special someone, he's kept any relationship out of the public eye.

5. They Put Themselves In The Way Of Danger A Million Times Over

In 2014, Muir told People magazine that, while reporting in Somalia, his news team came under fire by a terrorist group. The broadcast journalist has never been afraid to put himself at risk by covering events in conflict zones. Desmond never thought twice about endangering his own life when he thought it might save someone else's; just how many times did he daringly try to save Charlie after having premonitions of the musician's death?

6. They've Figured Out Their Purpose In Life

Muir pretended as a child to do newscasts from a cardboard box in his living room. By age 13, he was interning for a local television station in Syracuse, New York, deciding that a life in broadcast journalism was meant for him. Desmond may not have known from such a young age all the fantastic experiences his life would entail, but he eventually came to understand how his own existence was connected to others' lives on the island and their journey to return home.

7. They Both Have Their Go-To Soundtracks

When viewers were first introduced to Desmond on Lost, they quickly learned that the man in the hatch must have been pretty fond of "Make Your Own Kind Of Music" by Mama Cass, since that's his record of choice. Likewise, Muir has claimed he is a loyal fan of Radiohead and Coldplay.