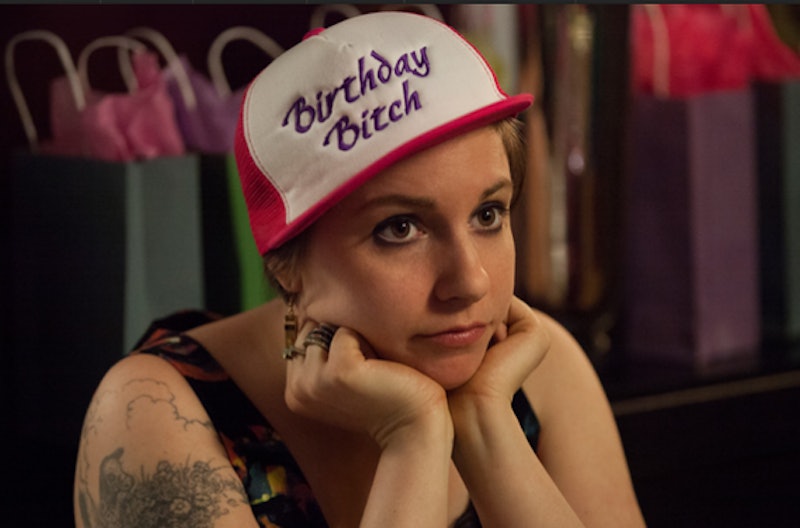 If episodes of Girls hinged on Hannah's self-involvement, this episode never would have seen the light of day. She might be known for behaving like the world revolves around her, but, ironically, on her birthday, Hannah Horvath proved to be incredibly thoughtful. "She Said OK" takes us to Hannah's 25th birthday party, which has been planned by Marnie and financed by Hannah's parents, who flew in for the occasion. The night was, predictably, full of what-the-fuck moments aplenty. What was less predictable was how few came courtesy of Hannah herself. Here are some highlights, ranked from the least cringe-worthy, to the most.

No, not in any literal sense, but she's ultra-Jessy-y at the party, all but disappearing.

Before the party actually begins, we meet Adam's sister, Caroline (played by Gaby Hoffmann). Adam is not happy to see her and when she insinuates that she plans to stay with him, he absolutely forbids it, in spite of Hannah's polite offer of their guest room. Hannah, for her part, is extremely mature and supportive and respects Adam's wishes about the apartment. She does, however, extend Caroline a pity invite to her birthday bash instead.

Ray runs into Shosh at the party and tries to do the mature, adult, we're-still-friends catch-up chit-chat. When she responds with almost nothing but blank stares, it's heart-wrenching and Ray admits that he doesn't want to be her friend. She doesn't seemed phased by it, which is all the sadder.

4. Shoshanna invited a rando to the party.

Shoshanna is embracing her singlehood, which is fab. She's changed a lot from the virgin we met in Season 1, however. Now, she has the moxie to flag down hotties on the street and ask where she can find some "dank weed" before inviting them to a friend's party. It's great to see Shoshanna enjoying her youth and discovering who she is, but sad that we learn about this through a conversation between said hottie and heart-broken Ray. Poor. Ray.

5. David shows up to the party.

When Hannah extended a polite invite to her editor, David, she never expected that he would show up. But he does. He shows up depressed and looking for a smartphone with which to use Grindr and make the most of his night. His appearance is a little off-putting for Hannah and he engages in a squabble with Ray over DJ etiquette. Mostly, he just dance around in a tank top making everyone kind of uncomfortable.

After a failed attempt at seduction, Adam's sister lashes out and bites Ray on the arm. It helps us understand why Adam was so adamant that she not stay with him and Hannah. It also sets up for the crazy that's to come (see number eight).

The first we see of Marnie this episode is her watching a YouTube video of herself singing. It's embarrassing just to watch it, like a Robin Sparkles video without the campiness. She screams at (presumably) a YouTube employee to take it down and insists that she can't ask the poster herself because he broke her heart. This means, of course, that it was posted by Charlie. Next, at the party, she harps on the video and drudges up the embarrassment again. The pathetic doesn't stop there though. She also gloats that she'll be able to post a ton of awesome Instagram pictures from the party, which she seems to believe will make Charlie jealous. Then, she gives a speech that's eerily reminiscent of her speech at Charlie's work party last season before pulling Hannah on stage and forcing her into a duet of "Take Me or Leave Me" from Rent. There's nothing about Marnie in this episode that won't make you want to crawl into a black hole and disappear for her.

When Hannah and Adam make it home from the party, Hannah opens the bathroom door to find Caroline naked from the waist down and bleeding, having broken something glass or ceramic in her hands and still clutching the jagged pieces. Hannah gets it together and helps calm her down, but it can't save Adam's mood.