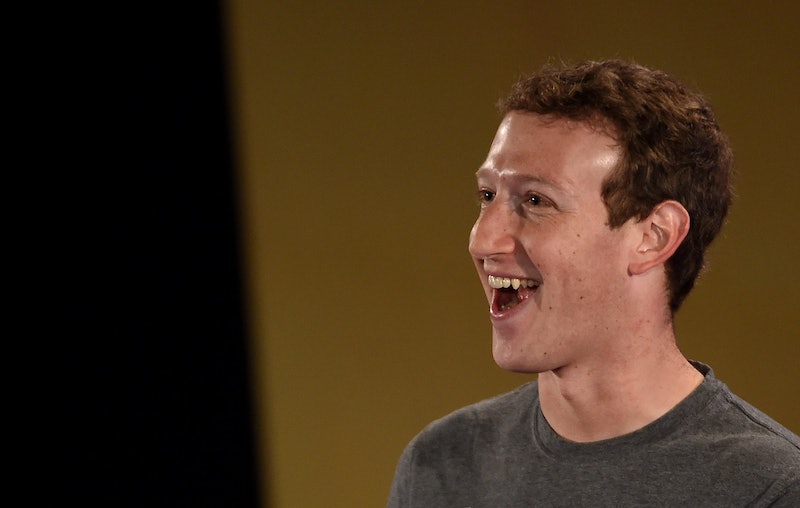 Since Mark Zuckerberg and Priscilla Chan introduced their daughter to the world Dec. 1, the Facebook creator has continuously graced our news feeds with adorable baby photos. Zuckerberg posted a photo on Friday that out-cutes all the others though — a Star Wars-themed photo of baby Max Zuckerberg. As you may know, Star Wars: The Force Awakens hit theaters Friday, and apparently the Zuckerberg-Chan household was just as excited as the rest of America.

Dressed in a Jedi cloak and "holding" a lightsaber (as much as a three-week-old can hold anything), Max was accompanied by Chewbacca, Darth Vader, and BB-8 dolls. Zuckerberg perfectly captioned the picture, which got more than a million likes within hours, "The force is strong with this one." Max's side-eye grimace definitely proves this to be true. She's already being groomed to be a huge Star Wars fan like her dad, so she'll likely treasure this shot as an adult.

As if one precious Star Wars baby photo wasn't enough to pump you up for the movie and give you all the feels, it inspired Zuckerberg's fans to comment with their own. Scrolling through the comments is essentially like flipping through a photo album of baby Jedis, mixed in with a few puppies which only adds to the cuteness.

Zuckerberg took two months of paternity leave from running Facebook, and based on his updates, he seems to be loving fatherhood so far. Along with dressing up his daughter in Star Wars outfits, he uploaded a photo of him changing her diaper and another reading Quantum Physics for Babies to Max, with the caption "I am loving reading to Max. Next year looks like it's going to be A Year of Children's Books!"

In a letter to their daughter, Zuckerberg and Chan pledged to donate 99 percent of their $45 billion in Facebook shares to a new charity they created — the Chan Zuckerberg Initiative. The initiative is dedicated to making long-term investments promoting equality in health, education, scientific research, and energy. "Your new life is full of promise, and we hope you will be happy and healthy so you can explore it fully," Zuckerberg and Chan wrote to Max in the letter. "You've already given us a reason to reflect on the world we hope you live in."

Here's to hoping the baby photos continue, because nothing brightens up an apathetic scroll through Facebook quite like an adorable baby dressed in a costume.