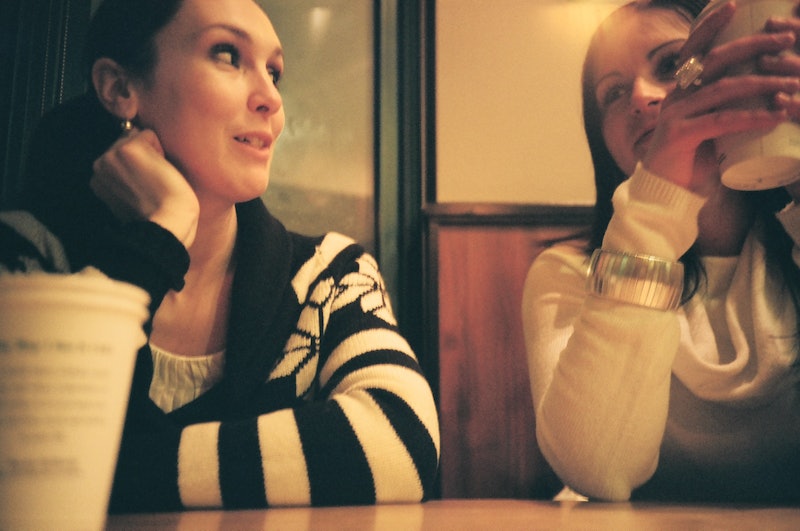 You're talking to your mom on the phone. You're answering a question in lecture. You're chatting with a group of friends over brunch. Odds are, in any of these situations (if not in all of these situations), you've said "um." It's a natural, almost expected component of our language. At this point, I can't help but wonder, why do we say "um"?

Linguist Herbert Clark of Standford University explains that people often use "um" and "uh" in a "very particular, deliberate way," with the phrases acting as "conversation managers" to signal to others that, in some way, you're having trouble communicating what you want to say. In my experience, it serves as a filler for when I need to think something through, or I'm scrambling to remember a piece of information (um, when did I put my laundry in? Where are all of my, um, library books?). At the end of the day, we all know we say it. So, the question is: Why?

Apparently, this is a pretty dynamic question, and one a lot of people are discussing. There are several ways to approach why we say "um" to begin with, and beyond that, there's even a lively discourse concerning why we say "um" versus "uh." Research shows a lot of this comes down to age and gender, but it's a pretty complex issue, and the findings aren't all what one would guess.

Gender seems to play a huge role in whether or not we say "um." Women say "um" about 22 percent more than men do, a study by linguist Mark Liberman finds. In his research, Liberman transcribed about 14,000 telephone calls across the United States, and discovered that while women do say "um" more than men, men are not immune to speech fillers; indeed, they actually say "uh" at twice the rate of women. Another really interesting finding to consider? Women use "uh" 20 percent more when talking to a man instead of another woman. Interestingly, I wasn't able to find any specific research on "filler" language in genders outside of cisgender men and cisgender women, such as in trans men, trans women, or those who identify as genderqueer; if any researchers out there are listening, it might be worth conducting some studies to address these current blank spots in our knowledge.

Does location play a role in whether or not we say "um"? So far, the answer points to no. Liberman conducted further research in British and Scottish English, German, Danish, Dutch and Norwegian, in an attempt to see if patterns matching those in the United States existed elsewhere. Weirdly? They do! In all the places he scanned, women and young people say "um" more than men.

Liberman believes that we say "um" when we're trying to decide what to say, and "uh" when we're trying to decide how to say it. Some studies show that we use "um" to signal longer pauses, and "uh" to signify shorter ones. Women, perhaps, attempt to signal for a longer pause because they're interupted ignificantly more (by both men and women) than men are. Stephen D. Cohen, of the Harvard Extension School, sufficiently shares his view on the subject when he states, "The simplest answer is that we have been conditioned to answer questions immediately from an early age." Cohen further points out that we use "um" most often at the beginning of an answer, and when we're transitioning to a new idea. Research from The Journal of Language and Social Psychology argues that people who use "filler speech" such as "um" are more conscientious and thoughtful.

All in all, it appears that gender has a pretty big impact on our choice of "um." When I hear that, I can't help but be reminded of how gendered societal expectations of speech can sometimes be. So often, women are expected to conform their speech to their surroundings, either in attempts to gain success by sounding less feminine or by by using uptalk to prevent being interrupted. For example, there's been a lot of criticism concerning young women and the "vocal fry" phenomena, and the basis extends to where women who speak with vocal fry may have a harder time getting jobs. When speaking in vocal fry, women are essentially getting a "creaky" voice from speaking at a low timber. What's extra frustrating? Supposedly, people with deeper voices are perceived as being more successful and dominant — apparently not for women, though.

While "um" and "uh" are markedly different in their uses, and how they're received, it does appear both young men and young women use "filler" language to communicate.

More like this
18 Hinge Prompt Answers To Try If You’re Looking For Something Casual
By Lexi Inks
12 Aphrodisiac Desserts To Spice Up Your Valentine’s Day
By Kaitlyn Wylde
16 Valentine’s Day Quotes About Chocolate That Will Make You Hungry
By Emma Cueto
4 Zodiac Signs That Will Take Forever To Admit They Like You
By Kristine Fellizar
Get Even More From Bustle — Sign Up For The Newsletter
From hair trends to relationship advice, our daily newsletter has everything you need to sound like a person who’s on TikTok, even if you aren’t.