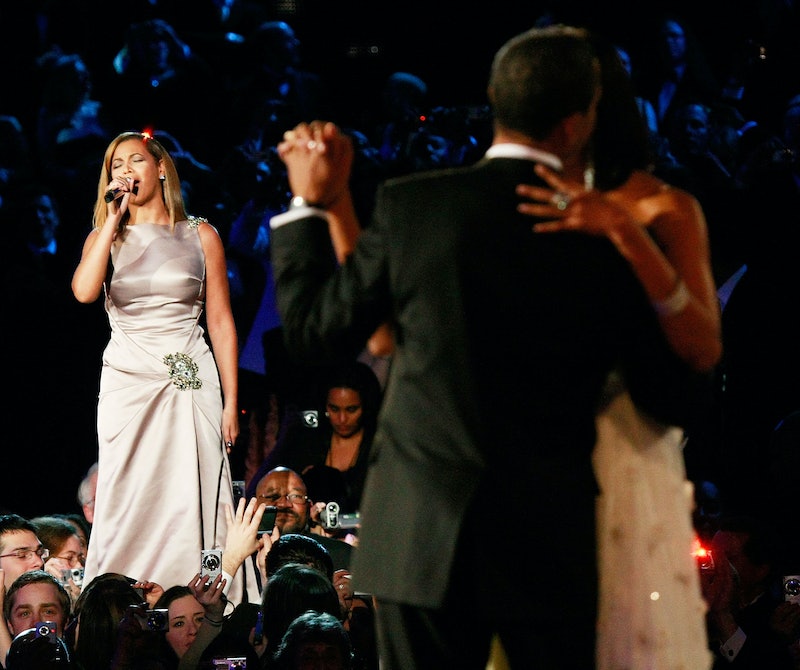 Did you really expect Michelle Obama's 50th birthday bash to be anything less than fabulous? The First Lady of the United States doesn't look a day past perfection — and proved it at her top secret par-tay at the White House's East Room on Jan. 18, one day after her birthday, where guests were instructed to hand over their phones to security on arrival. And for good reason — the bash had a crowd of over 500 celebrities, politicians, and other A-listers that celebrated the divine Mrs. O, who started the party off wearing an elegant, red jumpsuit.

And just like when there's smoke, there's fire, when Beyonce and Michelle get together, there's usually a performance in a smokin' hot ensemble.

Beyoncé, who brought her mother with her and wore a cream-colored and feathered mini dress, performed a mini concert of a half-dozen hits, including "Single Ladies," People reported, with Malia and Sasha Obama looking on in amazement.

John Legend also lent his voice to the evening, and sang "Happy Birthday" to Michelle twice — once with all the tone-deaf guests (we're looking at you, Joe Biden), and then a jazzy rendition.

Barack Obama also showed his adoration for his wife in a sweet speech.

The President recounted "the first time he laid eyes on her, how he was soaking wet and had on bad shoes but she didn't hold it against him," the outlet reports. "He thanked her for being patient with him. You could tell he had married his best friend ... Everyone got teary when Barack spoke."

The party didn't stop until well after 2 a.m., when the POTUS and FLOTUS were reportedly whooping it up on the dance floor. Dawwww. True love and Queen Bey — Michelle is definitely kicking 50's ass so far.