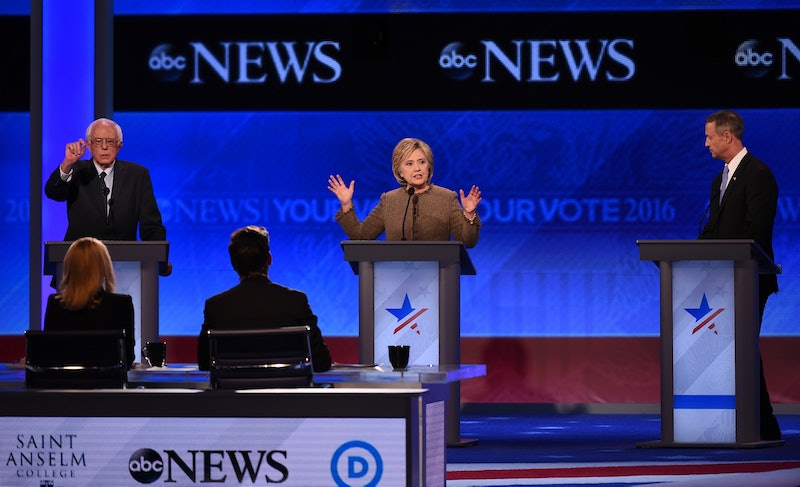 The third of six total Democratic presidential primary debates went down on Saturday night, hosted and aired by ABC News, and if you're a political fiend, you almost certainly watched it. Sure, the Democratic debates might not having all the garish, shocking allure of the Republican side, but they're still pretty essential viewing — after all, you may be watching our future president, especially if the GOP doesn't figure out how to solve its Donald Trump problem. So, who won the third Democratic debate?

First things first, let's rule out one person: former Maryland Governor and Mayor of Baltimore Martin O'Malley. O'Malley's case is deeply strange, because he looks like someone who in many years would've been a lock to be competitive, even if he were still ultimately unable to claim the Democratic nomination. On paper, he looks great: gubernatorial experience, a slick rhetorical style, and a policy platform that's appealingly to the left of Democratic front-runner Hillary Clinton.

But unfortunately for O'Malley, the cruel realities of life and politics have gotten in the way. In a three-person race against Clinton and Vermont senator Bernie Sanders, he basically has no safe harbor — he can't rely on the liberal Democratic base to look to him, because they've already got Bernie, and he plays that angle much better. And he can't argue for himself over Sanders on electability grounds, because those arguments are all even more true for Clinton.

This futility continued on Saturday night — despite O'Malley deploying his usual arsenal of sturdy one-liners (like that barbed wire/Statue of Liberty one), absolutely nothing happened that's going to benefit him in this race going forward, and it's getting harder and harder to envision anything that actually could. His decision to apparently call out Clinton and Sanders' ages, as well, was deeply ill-advised.

So, with that out of the way, which of the two real contenders for the Democratic nod won the evening? Make no mistake, it's not an easy call. I realize this won't endear me to any of Sanders' incredibly passionate, proactive supporters, and it's a very results-oriented way to look at it, but I'm going to have to say that Clinton successfully carried the night.

This isn't a case of missed opportunities for her rivals like the first Democratic debate was, either. Sanders performed extremely well, and spread his message of economic justice just like he always does, in addition to some strong criticisms of Clinton's foreign policy record. But given the current realities of the race, he simply didn't muster any critical hits on Clinton that could meaningfully change his position in the race.

Often, Sanders has operated at a self-inflicted disadvantage, by virtue of his typically narrow, laser-like focus on domestic economic issues. Not because those views aren't popular or worthwhile — he's undeniably the most pro-labor candidate in either party, and his economic populism plays well to a Democratic electorate that craves equality and reform in the face of greedy corporations, and their outsized amount of political influence.

Granted, trying to scheme a way to defeat a political juggernaut on the scale of Clinton's campaign has to be a nightmare, and while broadening his once-limited core message is a hugely meaningful shift in strategy, there's still no easy fix. With the deficits Sanders faces in a slew of key battleground states, and Clinton's undeniably masterful skills on the debate stage — she might be the hardest debater to pin down in recent memory, and clearly prepares like no other — he's essentially relying on the metaphorical "puncher's chance," hoping that one of his pointed criticisms combines with a flub on Clinton's part to turn back the tide.

Considering he entered the debate in the midst of a considerable scandal, he did about as well as you could reasonably expect, but we're getting to the point where it's not enough for Sanders to score — Clinton has to stumble, too. And sad to say for Sanders, that's looking like an increasingly remote possibility, as she looks more in command and comfortable in her political element right now than she ever has before.