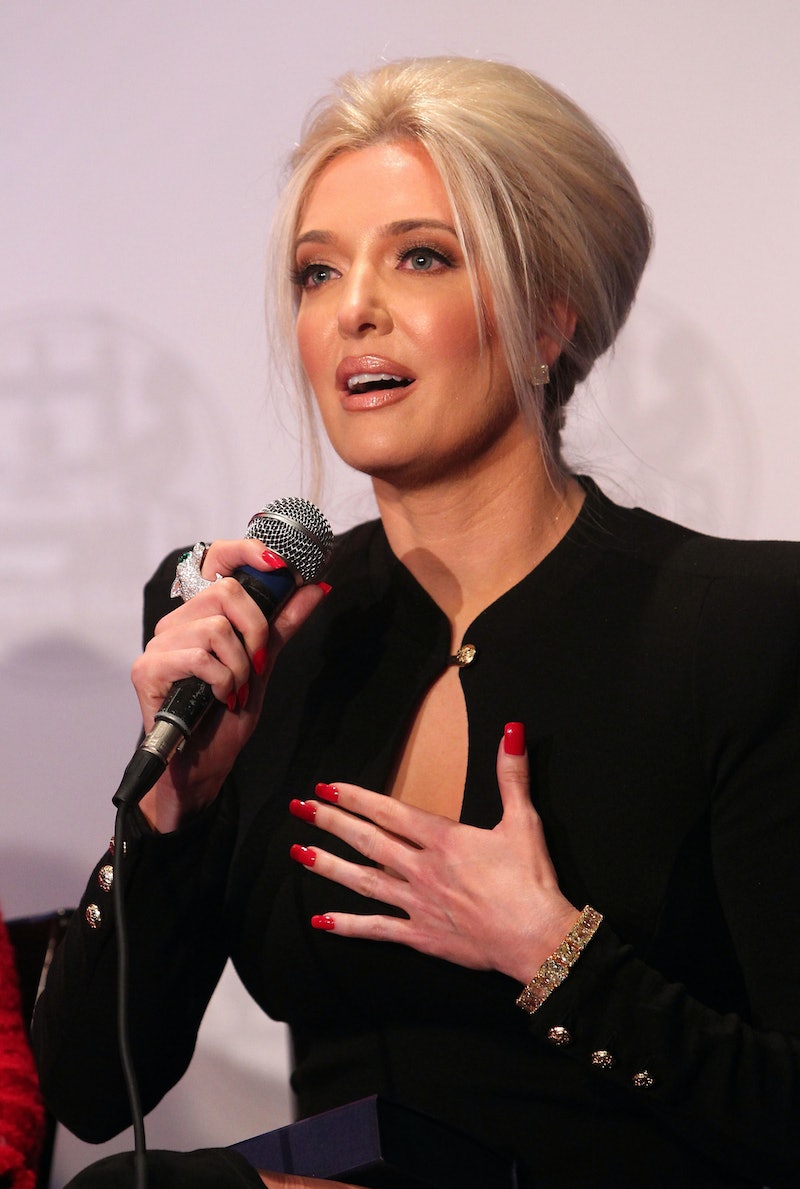 Despite the title, the cast of Real Housewives of Beverly Hills' have had careers outside of the home. There’s Lisa VanDerPump, who was a serious restauranteur long before Bravo came knocking on her door; Lisa Rinna and Eileen Davidson were famous actors on long-running soap operas; and Yolanda Foster was the OG modeling Hadid. But who would have thought that one among them was a renowned dance-music artist? If this is a *record-scratch moment* for you, just know that I'm no liar — you can listen to Erika Jayne's songs and hear her talent for yourself!

That’s why it should come as no surprise that the newest cast member, Erika Girardi aka Erika Jayne, has had her own taste of success outside of being married to famous lawyer Thomas Girardi. In fact, Erika Jayne has had eight number one hits on the Billboard charts. You read that right: Eight. To give you some perspective on how blown my mind is by this fact, Rihanna has had nine number one hits, according to Billboard's chart history. Due to my paltry understanding of the transitive property, this must mean that Erika Jayne is one hit away from being the next queen of pop music. Move over, RiRi!

So, the question remains: Where can you listen to this dance-floor doyen's EDM magic? Well, you can check her out on places like Spotify and iTunes of course. But, since this is the season of giving, I have provided her official videos of some of her songs and also supplied you with some lyrical analysis that you probably, absolutely didn't ask for. You're welcome, everyone.

I'm assuming that the lack of "e" here distinguishes this song from whatever they gave me after my wisdom teeth were removed, because I don't recall wanting to grind that much after taking it, but I'm proud of her for overcoming adversity and writhing her heart out on that bed in the video.

This is my new vote for "song I will listen to when I'm home alone and want to feel a little less dull while cleaning the bathroom on a Sunday afternoon." Though the song itself is bubblegum-sweet, the video is decidedly not, so this is my official NSFW warning.

2014's answer to the auto-tuned call-to-action for partying, sung by a Real Housewife. Someone let Kim Zolciak that "Tardy for the Party" is officially old news.

In a Billboard spotlight published in 2012, Erika delineates the parameters of the audience for this song as being more widespread than her past hits —"college kids, high school kids, moms, dads." All party people. All getting ready to ignite the world. That's a lot of planned arson in the name of partying.

Though the production quality on this video is on par with those home videos of you opening Christmas presents in 1998, the scandalous narrative woven throughout is far more riveting. This video has layers, including a "seduction" scene that features Erika Jayne bobbing through a casino, and an "abduction" sequence that features a very fast-moving dinghy and a blindfold. But, all jokes aside, this song has some serious Britney Spears circa Blackout vibes, and I am not ashamed to admit I LIKED IT.

I'm really excited to see how this season of RHOBH plays out for this songstress, but more excited for her next hit.