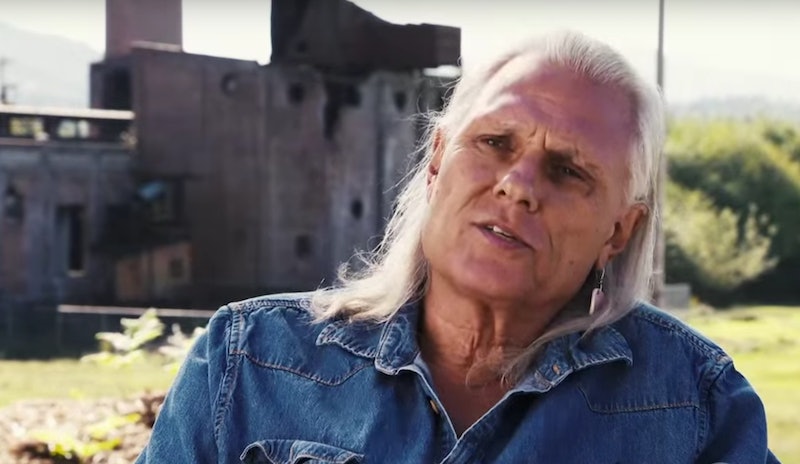 It's been a rocky and mysterious road, but there's finally a teaser for Showtime's Twin Peaks revival. Unfortunately for the many eager fans of the show, the teaser, which Twin Peaks creator David Lynch tweeted on Friday, does not reveal very much about the upcoming season. It's actually a production announcement, depicting the town of Twin Peaks and the resurrection of the iconic Twin Peaks sign. It also features some musings from Michael Horse, who played Deputy Hawk on the show.

In general, the trailer offers very little as far as answers, and instead leaves us with a lot more questions. But Twin Peaks fans should all be prepared for a lot of mysterious promotional materials, and very few hints about how the upcoming season will go. It is a mystery series, after all, and a vaporous and elusive one at that. While I don't expect David Lynch to provide any kind of concrete hints about where the show is going, I do hope that future materials will provide a few more answers. This promo, as well as those that have come before it, have been frustrating in their elusiveness, causing fans to ask as many questions as they were left with after the show came to an end. Here are just a few of the questions the new trailer has left me with.

1. Will There Be A New Soundtrack?

The beginning of Twin Peaks' iconic theme song plays during the trailer, and I found myself wondering if the new series will include the same repetitive, dramatic, dreamy soundtrack that it is known for. I hope that it does, but maybe with some updates.

2. How Are They Going To Deal With The Actors' Ages?

I've wondered this before, but seeing the much-aged Hawk really made me wonder how Twin Peaks is going to deal with the fact that its actors have aged over 25 years. I'm wondering whether this reboot will assume that all the characters have stayed in the town of Twin Peaks into middle age, pretend they're still the same age, or what.

3. Are They Ever Going To Complete This Season?

The fact that this trailer shows very little evidence that they have shot much yet makes me worried that the show is running behind. It's been a difficult journey, with David Lynch coming and going and the premiere date pushed back. I hope that this is just part of the mystery.

I realized while watching this trailer that I associate a certain graininess with Twin Peaks, and seeing that classic waterfall shot in HD was a shock to me.

At the end of the fairly straightforward trailer, there's a flickering image of a man. While it looks like it could easily be David Lynch, it could also be the villain from the previous season, or perhaps a new character. Honestly, it's too blurry to tell.

While I can hope that I will receive more answers before Twin Peaks premieres in 2017, I know that wish is probably in vain. Maybe it's for the best if all the mysteries remain mysterious.

More like this
The First Trailer For 'That '90s Show' Includes So Many Nods To The Original Series
By Jack Irvin, Alyssa Lapid and Grace Wehniainen
'Gilmore Girls’ Lauren Graham Just Revived Our Hopes For A New Reunion
By El Hunt
How The Thanksgiving Episode Of 'Gossip Girl' Changed Pop Culture History
By Gabrielle Bondi
The 'Ugly Betty' Cast Just Reunited In The Best Way
By Sam Ramsden
Get Even More From Bustle — Sign Up For The Newsletter