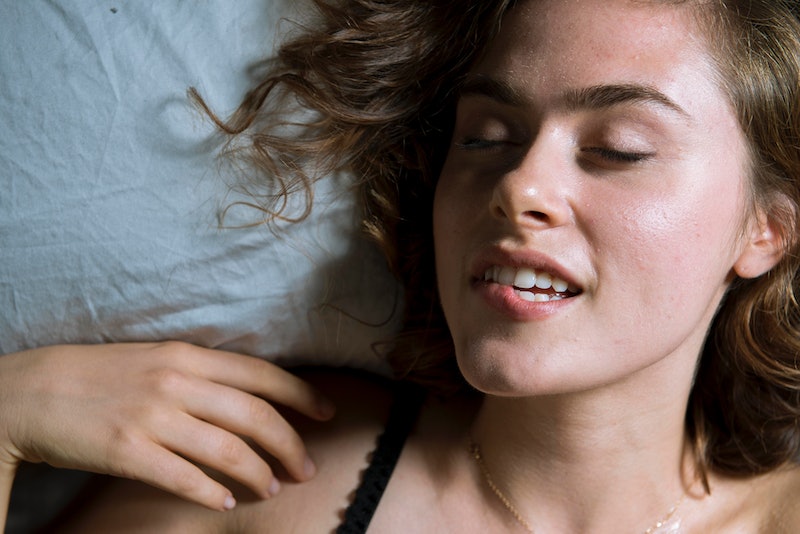 At some point in their sexual lives, many women have faked it. There are tons of reasons why women fake orgasms, or even make noises during sex. In fact, according to a 2011 study published in the Archives of Sexual Behavior, 66 percent of women admitted to moaning during sex in order to make their partner climax faster, and 87 percent said they became more vocal during sex in order to boost their partner's self-esteem. But regardless of why women do it, a new worldwide study of women’s sexual satisfaction, set out to find who's doing it the most. And, French women were found to fake it the most. But that’s not all. Out of all the other countries surveyed, French women also struggled to orgasm during sex the most— and had the least regular orgasms.

International polling and marketing firm, Ifop took 8,000 women from France, the U.S., Spain, the UK, Italy, Canada, the Netherlands, and Germany and surveyed them on sexual satisfaction. As the study found, 49 percent of those surveyed from France said they “fairly regularly” struggled to climax during sex. When it comes to faking orgasms, France also topped the list with about a third of them saying they faked it regularly.

So what's the reason for all the orgasm trouble in Fance? According to François Kraus from Ifop, in comparison to women in other countries, women in France experience a high level of stress and fatigue, which leads to unstable emotional states and a decrease in libido. Kraus also noted that French couples are still attached to more penetrative sex, which isn’t exactly the optimal position to reach the female orgasm.

While France tops the list of women who fake orgasms the most at 31 percent, in second is the U.S. with 29 percent, followed by the Italians and the Brits at 25 percent. While sex is supposed to be pleasurable for everyone involved, orgasms shouldn't always be the focus of sex. But, it can definitely be frustrating to not achieve them during sex. But France's women aren't the only women having trouble getting off.

Here’s the ranking of which women have trouble orgasming the most, according to the survey:

More like this
16 Ways To Jazz Up Your Tinder Bio This Year
By Lexi Inks
Help! My Partner Only Wants Sex Late At Night & Won’t Compromise
By Sophia Benoit
Ask A Sex Therapist: Is My Sex Fantasy Normal?
By Madison Malone Kircher
What Mercury Retrograde Spring 2022 Means For Your Sign's Sex Life
By Nina Kahn
Get Even More From Bustle — Sign Up For The Newsletter