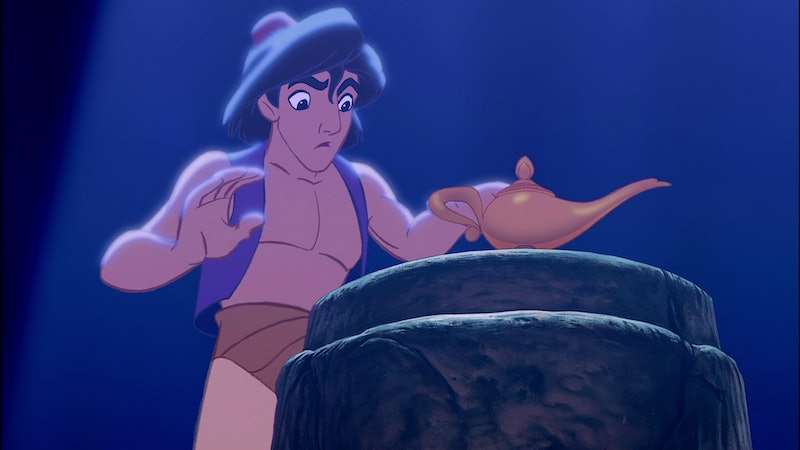 Here's an eye-popping headline for you: According to a national survey by Public Policy Polling, 30 percent of Republican primary voters want to bomb Agrabah, the fictionalized desert kingdom in Disney's Aladdin. It's a glaring, somewhat alarming result that's gotten a ton of attention on social media, and it's no mystery why — it sort of strangely blends the recent 1990's nostalgia boom with the disturbing xenophobia of our current political climate.

First, some necessary disclaimers. If you're curious about the survey's sample size, PPP lists it right at the bottom of each of the pages of results. The answers were culled from a group of 532 Republican voters. And it's worth noting that the question about Agrabah doesn't tip its hand at all. Rather it drops the name as though it were a real country, without any wink or nod to its actual origin. And this question was asked of Democratic primary voters too, and the number was better, though still discouraging — 19 percent supported an Agrabah bombing campaign.

There's a very fair point of criticism to be made that PPP is trying to dupe people here, and it's not as though this is unprecedented. They're well-known for the occasional humorous, bizarre, or trollish questions that they sometimes decide to ask. Some are hard-hitting, and some are frivolous — as Business Insider detailed back in 2012, they polled on both Mitt Romney's enthusiastic claim that the trees in Michigan are the right height, and whether President Obama is secretly Muslim.

But regardless, you're still left with that undeniably startling figure: more than 150 of the people they surveyed signed on for bombing Agrabah. Even worse, they could've picked "not sure." It wasn't a binary choice. It seems like a lot of people just want to Make Jafar Great Again.

It'd be funny if it weren't so sad. And if the sort of casual, low-information xenophobia it implies weren't so well-reflected in the other responses that PPP got from this field of GOP primary voters. Those, quite frankly, are where the five-alarm warning bells really start blaring. For example:

Taken in full, it's a rather horrifying set of numbers, and they speak to the ever-increasing influence of Donald Trump on the GOP electorate — the internment and 9/11 celebration questions both stem explicitly from statements by his campaign. And when you look at the incrimination numbers on those questions, at 28 and 36 respectively, it's difficult not to notice how similar they are to the current range of Trump's support in national polls. In other words, if you're one of the fair-minded conservatives who actually supports religious freedom, and knows that shuffling certain types of people into relocation camps is a bad idea, you've at least partially got The Donald to blame for all this.