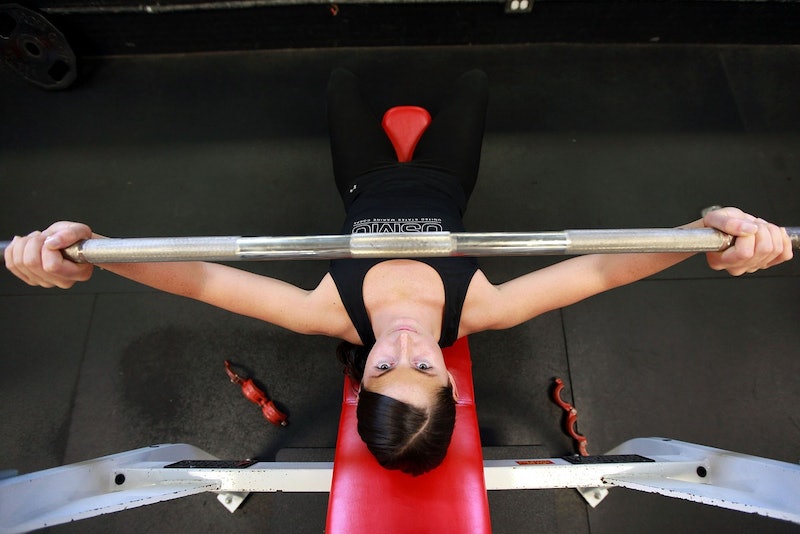 It's never a surprise when we find yet another health benefit to working out, but this new one is a little unexpected: Research published in Scientific Reports found that exercise could help to prevent colds and infections from developing. Although the study was conducted using mice, it probably has results that can translate over to understanding human health. This could be the news you need to keep you working out this winter, instead of giving into the temptation of watching movies all day on the couch. Not that there isn't a time and a place for some Netflix minus the chill, but it's important to stay moving, too.

First things first: Why do we get sick, anyway? When germs or harmful bacteria or viruses invade our bodies, some of our cells work to fight the intruder off, while others inflame in order to promote healing. The problem is when too much inflammation occurs, it can weaken your immune system and make it easier for you to get sick. Exercise is known to decrease inflammation, so its relationship to immunity, as well as the relationship between fat cells and inflammation, inspired the researchers to look a little closer at these connections.

For the study, they used 28 lab mice, all of whom had an average amount of body weight, and gave them tests to determine their blood and fat cell inflammation levels. Then the mice were divided into two groups, one of which started a swimming workout routine in which they swam in a pool for 10 minutes, five days a week. Mice aren't natural swimmers, so this workout is equivalent to about 30 minutes of jogging in humans. The second group of mice didn't engage in any exercise. All of the mice's inflammation levels were then carefully monitored over three weeks.

The researchers predicted that the mice who were swimming would have increased inflammation; the theory was that their bodies would need to work to heal the minimally damaged tissue that normally occurs after working out, which is how your muscles gain strength. As it turned out, they were right: The mice who were exercising had higher levels of inflammation than the mice who were sedentary.

In order to test the mice's immunity, half of each group of mice was injected with Staphylococcus germs after the three weeks were up. Known as a staph infection, these germs can severe lung problems that can resemble pneumonia. Both injected groups got sick, but their bodies responded much differently to the germs depending on whether or not they had been exercising. The swimming mice's immune systems were more active and their inflammation levels were much lower than the sedentary mice's. They didn't get as ill as the sedentary mice, and they experienced less lung damage.

The researchers concluded that working out can strengthen your immune system and help you to recover faster when faced with illness. Exactly how that process works, however, is still somewhat of a mystery. Dr. Yoonkyung Park, who was part of the research team that conducted this study, explained to the New York Times that there were two observable effects that they could see — fat reduction and regular stress. Fat is associated with inflammation, so as the mice were lowering their size and amount of fat cells, they decreased the level of inflammation in their body. Additionally, exercise causes small trauma to body tissue, which forces your body to promote healing; according to this research, it might also act as a sort of practice round for your body to draw experience from when met with the unwanted trauma of illness. This process in turn caused the mice's bodies to develop a stronger immune systems that was able to better regulate inflammatory levels that helped them to keep infection at bay.

Obviously, this study was conducted on mice, so we can't draw an exact parallel with humans here. But, Dr. Park believes that the results found here are likely to apply to humans, so further research might be able to replicate the results. In any event, it still might be useful as motivation to keep hitting the gym during these cold months. Winter colds are the worst!

More like this
6 Abortion Advocates To Follow On TikTok
By Sara Youngblood Gregory
The 11 Best Sheets For Night Sweats
By Megan Gray
The 5 Best Probiotics For Bloating
By Margeaux Baulch Klein
Tapping Mind/Body Power: Evia Brings Digital Hypnotherapy To Menopause
By Cassandra Seale
Get Even More From Bustle — Sign Up For The Newsletter