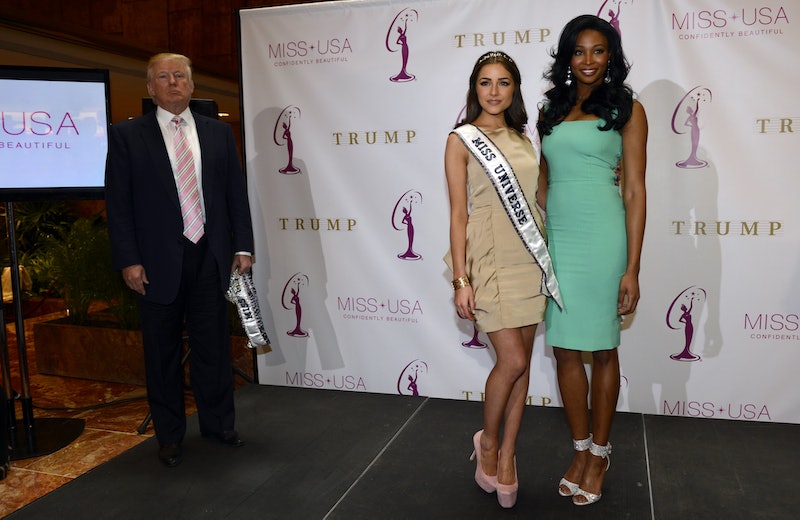 There are, perhaps, fewer things in this world stranger than Donald Trump. Given that the billionaire mogul has spent the last couple decades bouncing from project to project, that's sort of a given. The best part about his penchant for business experimentation? Every so often, the public stumbles across a horde of baffling throwback photos of Donald Trump that remind us all just how crazy it is that the braggart GOP candidate is actually running for president of the United States (and at the top of GOP polls, no less).

Trump's bizarre appeal isn't lost on everyone. Just this week, Russian President Vladimir Putin praised the inexplicably orange-hued front-runner, calling him the "absolute leader" of the GOP race in a news conference with Russian media. "He is a bright and talented person without any doubt," said Putin. "[He is] an outstanding and talented personality."

That's great and all, but when a man who just this year reinforced a ban on memes of himself and spent the whole of 2013 outlawing all things gay decides to compliment you, it might not exactly be a good thing. Unsurprisingly, Trump didn't seem to care, accepting the praise and returning the compliment in kind. "It is always a great honor to be so nicely complimented by a man so highly respected within his own country and beyond," said Trump, in a statement to CNN on Friday.

Whether Trump forgot all the dirty deeds Putin is rumored to have committed while in power or whether he's just willing to take endorsements wherever he can get them at this point is still up for question. At best, Trump's Putin-bromance will join the lengthy archive of similarly strange moments from the billionaire's sordid history, all of which were caught on camera and which leave him looking less like a presidential candidate and more like a controversy-plagued reality star.

This Photo-Op At A Gym With Miss Universe 1996

Remember that time Alicia Machado, who was crowned Miss Universe in 1996, got in trouble for gaining weight? According to Machado, Trump and the rest of the pageant board at the time weren't happy that the Venezuelan beauty queen hadn't maintained her pre-competition size following her win, and forced her to go to the gym or risk losing her crown. To top it all off, Trump brought along the cameras.

"When you win a beauty pageant, people don't think you're going to go from 118 to 160 in less than a year, and you really have an obligation to stay in a perfect physical state," Trump told People magazine that year. The billionaire also allegedly called Machado an "eating machine" when the cameras weren't rolling. Ugh.

That Time He Signed A Woman's Breast

Sure, this incident alone may have raised a few eyebrows, but it's what happened behind the scenes, years earlier, that make this photo all the more inappropriate for a presidential candidate. According to lawyer Elizabeth Beck, who was working on a 2011 legal deposition with Trump, the business mogul became visibly incensed after Beck asked for a break to pump breast milk. "He got up, his face got red, he shook his finger at me and he screamed, 'You're disgusting, you're disgusting,' and he ran out of there," Beck recalled in a sit-down with CNN this past July.

So I guess Trump is cool with you whipping your breast out, so long as you don't try and use if for its intended purpose. Good to know.

That Time Trump Was An Action Figure

This Trump doll, which was used to promote the billionaire's hit reality show The Apprentice, actually talks (sorry, it doesn't ream out immigrants, if you're into that sort of horrible thing). Some of the doll's best one-liners include, "I should fire myself just for having you around," and "I have no choice but to tell you... you're fired."

I'm still not sure if this is a good thing or bad thing... but when was the last time a presidential candidate had his own action figure going into primary season? Checkmate, Ted Cruz.

That Time Trump And His Dictator Bestie Had a Sleepover

Yes, this actually happened. In 2009, during one of his trips to the United States, now-deceased Libyan dictator (and all-around terrible person) Muammar Gaddafi pitched his outdoor tent in the backyard of one of Trump's New York estates (I'm guessing he had permission and wasn't just squatting. "Doors all over New York have been slammed in the colonel's face, but Trump says he has rented part of a large property in Westchester county to Middle Eastern tenants who may be associated with Gadaffi [sic]," The Guardian reported that month, noting that Gaddafi had been in town for the U.N.'s annual assembly.

... Do you think that they played "Bloody Mary" and braided one another's hair?

In the late '80s, Trump was trying his hand at just about everything, starting up his own airline company (subtly named Trump Airlines) and even attempting popularize a board game named after himself. Classy. The most outrageous of those ventures? A cycling race similar to the historic Tour de France named — what else? — the Tour de Trump.

To no one's surprise, the venture bombed and Trump pulled his sponsorship despite promises that the race would grow to "rival the Tour de France." Still — it made for a good story, and cool anecdotes are what differentiate a serious presidential candidate from his or her rivals. Right?

That Time Trump Had His Own Game Show

Weird, right? Sadly, this venture (a game show called "Trump Card") didn't last either. If it had, perhaps Trump could have used it as a test to determine which politicos were fit to join a prospective Trump presidency. Or, you know, which countries were fit to be our allies. Either one.