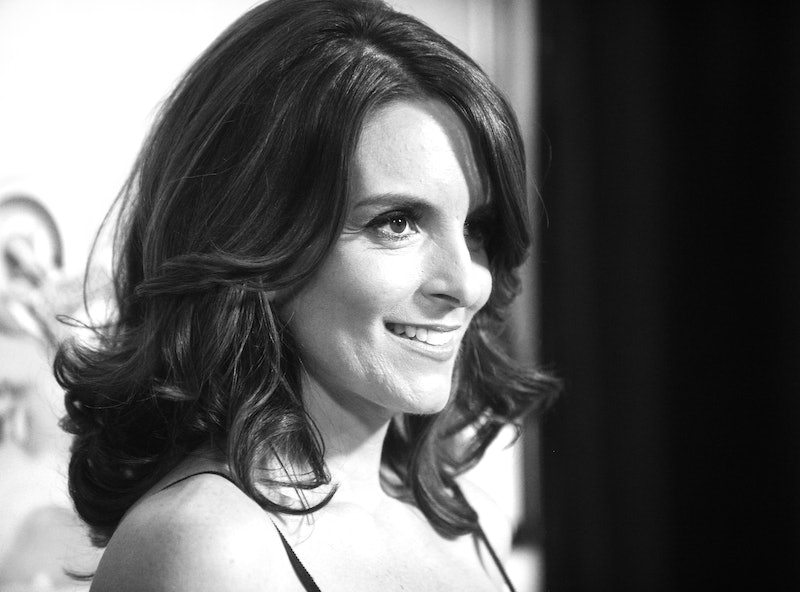 Watch out New York — Liz Lemon is getting the glamour treatment, sans Dunkin' Donuts. Screen queen Tina Fey is the latest to cover Net-A-Porter's The Edit. Smoldering hot in red, Fey proves that comedic chops and sophistication can go hand in hand. Cue the swooning.

This is Tina Fey amplified to the next level. Her fashion spread features a medley of luxury names — a heart-stopping Halston Heritage jumpsuit, fringed Tom Ford jacket, one classy Dolce & Gabbana frock, a hint of that Cosabella bra. However, it is Fey in the fiery Rosetta Getty number that steals the spotlight and commands the cover. Petition for Fey to rock more one-shoulder styles, anyone?

Fey's interview is refreshingly candid, tackling everything from pool parties to her friendship with Amy Poehler, and yes, even admitting to playing mean girl in high school (don't worry — I'm equally as shocked). "I was [the Mean Girl], I admit it openly. That was a disease that had to be conquered. It’s another coping mechanism – it’s a bad coping mechanism," she divulges. However, Fey has since learn to take the moral ground: "Saying something terrible about someone else does not actually level the playing field." Wise words to remember indeed.

Fey is truly the boss of all trades, dishing out life advice, producing laughter, and of course, dazzling on the red carpet. Here are some other times she went full-on glam.

Leave it to the comedian to flawlessly execute a strapless crystal number. The contrasting black panels give the dress a decidedly tuxedo vibe, to which she could most likely also pull off just because she's Tina Fey.

Ah, the one-shoulder gown strikes again. Fey exposes that skin like no other — and no one's complaining.

Meet my favorite Fey ensemble yet. Without a doubt, she radiates in this metallic masterpiece that fits like a dream.

Yes, this is the very number that sparked a style intervention. Its risque essence had Fey's mother and daughter asking, "Is that your dress or your underwear?" to which Fey then realized made it perfect premiere attire.

5. Beauty And The Bold

Even when Fey switches her sartorial game from neutral hues to vibrant patterns, she manages to kill it for the cameras.

After Fey's The Edit cover, I was 100% sure red was her power color. But if I've learned anything else, it is that blue is clearly in her favor too.

Enchanting with a touch of quirkiness, this strapless floral gown has Tina Fey written all over it.