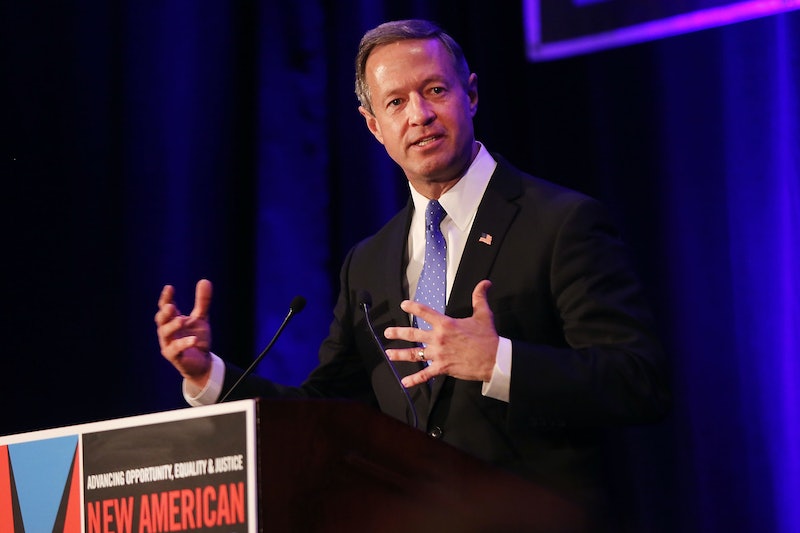 Although Hillary Clinton is currently the Democratic front-runner in the presidential race, Vermont Sen. Bernie Sanders has been rapidly advancing on her in the polls. According to the latest Boston Herald/Franklin Pierce poll, in New Hampshire — where Saturday night's Democratic debate was held — Sanders was polling at 48 percent compared to Clinton's 46 percent. But what about Martin O'Malley? The former Maryland governor spent the last Democratic debate of the year trying to gain some real name recognition by taking some firm stances on gun control and terrorism, and O'Malley's closing statement at the Democratic debate was his perhaps last chance to do this.

In the same aforementioned Boston Herald/Franklin Pierce poll, O'Malley remained at just 2 percent in New Hampshire. Although his favorability ratings have continued to increase during his campaign, he hasn't been a major contender for the Democratic nomination. During Saturday's debate, he needed to set himself apart from his fellow candidates.

Major topics at the debate included terrorism, gun control, health care, and national security. In light of Donald Trump's recent proposal to ban Muslims from entering the United States, as well as the San Bernardino attacks, the candidates also faced off on the subjects of national security and foreign policy. In the past, O'Malley has taken a strong stance on gun control, and he has openly criticized the Democratic National Committee for putting together a debate schedule that protects and favors front-runner Clinton. But despite his attempts to become more well-known among the Democratic voter base, he has been unable to ascend in the polls.

During the debate, O'Malley managed to capture national attention when he interrupted the moderators in order to make his stance known on gun control. And as Saturday night's Democratic debate came to an end, O'Malley's closing statement applauded the healthy exchange of ideas during the debate and promoted economic justice and immigration reform, calling for "a pathway to citizenship for all." O'Malley also addressed the necessity of combating climate change, and warned about the dangers of "returning to polarizing figures from our past." Full remarks are below.

You know, my wife, Katie, and I have four terrific kids, and like you, there's probably nothing that we wouldn't do to give them a future that's safer, that's healthier, where they have more opportunity than our parents and our grandparents gave to us.

Tonight what you listened to was a healthy exchange of ideas about how we do that, that which we have always proven in a capacity to do better than any nation in the world, to take actions that include more of our people more fully in economic and social life of our country.

And we can do it again. And we also create a better future for our kids when we square our shoulders to the great challenges of our times whether it's terror trying to undermine our values or Republican presidential candidates trying to get us to surrender our freedoms and our values in the face of this threat.

The other big challenge we have is climate change. The greatest business opportunity to come to the United States of America in 100 years. We need to embrace this. I have put forward a plan that does this, that moves us to 100 percent clean electric grid by 2050. Join this campaign for the future. New leadership is what our country needs to move our of these divided and polarized times. Thank you.

O'Malley's closing statement simultaneously went after the Republican candidates and briefly summarized the issues he cares about most. Unfortunately for the former Maryland governor, it is unlikely that his debate performance and his closing statement — which was one of his last real chances to sway voters in his favor — will have a significant impact on the polls. O'Malley really needed to stand out tonight. But as his closing statement demonstrates, the ways in which he differs from Clinton and Sanders are minor at best.

He is obviously a liberal, and follows the Democratic Party's platform closely. However, his sweeping statements about rising up "to the great challenges of our times" are not specific enough to convince voters that he is a name worth remembering. Although O'Malley rose to the occasion during the debate by being explicit in his stance on gun control and privacy, he needed to make a much clearer distinction between himself and his fellow candidates instead of just ceaselessly criticizing them.