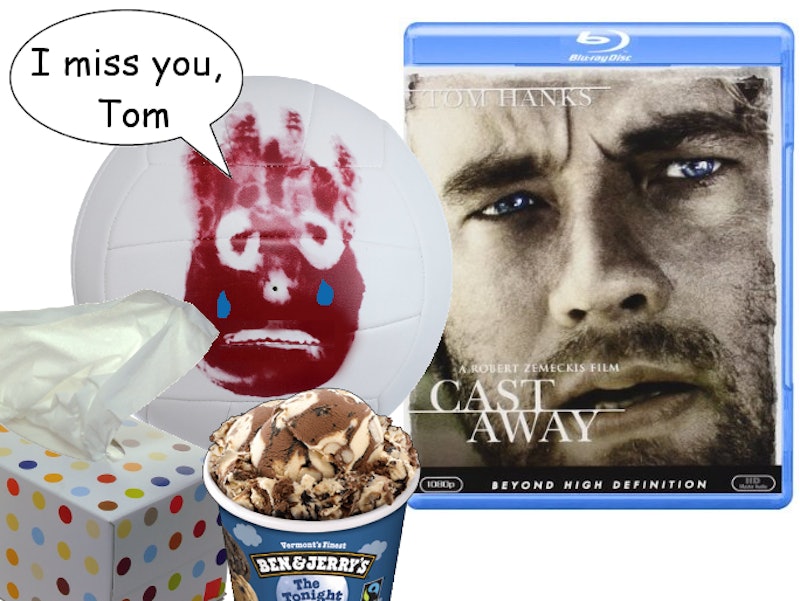 There probably hasn't been a more beloved piece of sports equipment than Wilson the Volleyball from the Tom Hanks movie Cast Away. Back when the film was release to critical acclaim in 2000, the bloody-hand printed friendly ball became an instant celebrity. So what is Wilson the Volleyball from Cast Away up to today, 15 years after he originally rose to fame? I got the chance to catch up with good ol' Wilson and the little volleyball regaled me with tales and Photoshops, er, photos from his adventures in the years since his breakout role.

Wilson is probably the most famous volleyball on the planet. He has his own IMDB page, won the 2001 Critrics Choice Award for Best Inanimate Object, and he even appeared on Saturday Night Live three times (according to his IMDB page). Wilson co-starred in Cast Away with Tom Hanks, who played workaholic FedEx engineer Chuck Noland, who gets stranded on a deserted island for years with a silent, but caring companion volleyball who won the hearts of audiences everywhere. After the film was released, Wilson (one of many prop Wilsons, shh) was sold at auction to ex-FedEx Office CEO Ken May for $18,500. But that Wilson isn't the only one — the volleyball gained so many fans that his namesake company, Wilson, offers a special edition volleyball that looks just like Wilson the Movie Star.

But what has the real Wilson from Cast Away been up to since? Let's find out on a (fictional) Photoshop journey.

As Wilson tells it, life in May's real-life FedEx office was way tamer than a movie set. "It was so boring," he told me. "All they did was talk about numbers." And as the years went on, Wilson's fame dwindled. His invites to Hollywood parties started to disappear. Hanks stopped returning his calls.

"I knew I needed to make a comeback," Wilson said.

Wilson decided to try to make a splash on the biggest volleyball stage there is: The Summer Olympics. In 2008, Wilson traveled to the Olympic Games in Beijing, where no one really noticed him. Actually, someone did see him, said "Ew, this volleyball has blood on it!" and threw him in the garbage. "I don't want to talk about that incident," Wilson confessed.

Wilson returned home and fell into a depression. He indulged in many big lunches with May and followed his owner to May's new job as president of Krispy Kreme in 2011. There, Wilson ate all the free donuts he could handle — and then some.

To put it bluntly, Wilson got fat — more than double his size. One day, while eating donuts, he stumbled upon Cast Away airing on TV and saw his former self. "That was enough inspiration for me to get back on track," Wilson said. "I realized that I can't wallow in past glories forever and wait for Tom's calls. He's never going to call me." Though rigorous calorie counting and a gym membership, Wilson slimmed down and got back in shape.

In 2013, May moved on to work at Topgolf, a chain of fun driving ranges. Wilson decided to take up golf while on his fitness kick and he took a job teaching prop acting, passing on his Cast Away wisdom to other prop actors. He served as mentor to the Golden Ticket from Tim Burton's Charlie and the Chocolate Factory, the ring from the Lord of the Rings movies, the Mockingjay pin from the Hunger Games films, and many more.

Earlier this year, Wilson got his wish — he literally got thrown into the arms of Hanks at a New York Rangers hockey game in Madison Square Garden. Hanks looked happy to see his old pal and Wilson was ecstatic to be in the pressence of his former co-star. Together, they cheered for the Rangers.

"Dreams really do come true," Wilson said of the experience.