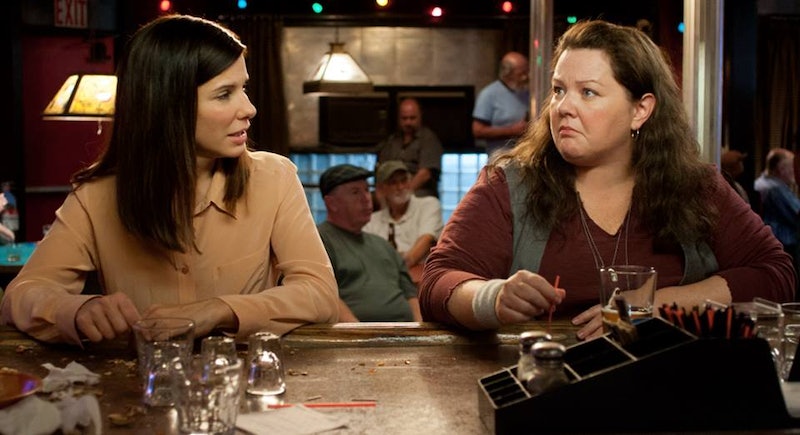 While watching Sandra Bullock in the 2013 movie The Heat, I couldn't help but think her FBI agent character Sarah Ashburn reminded me of someone. Bullock has a decades-long career as an actress and it's only natural that she's played an FBI agent in another role — notably, Gracie Hart in Miss Congeniality, which was released in 2000. But in the battle of Sandra Bullock as an FBI agent in The Heat vs. Miss Congeniality , who's better: Ashburn or Hart? I think it's about time we do a comparison and find out once and for all.

Of course, these are two different Bullock roles in two different movies, which were released 13 years apart. But hey, that doesn't mean some pieces of each puzzle aren't kinda sorta similar. In Miss Congeniality, Bullock plays Hart, an unkept agent who goes undercover (and gets a makeover) at the Miss United States beauty pageant. In The Heat, Bullock is the straight-laced, by-the-book agent Ashburn, who clashes with, then bonds with hilarious foul-mouthed detective Shannon Mullins (played by the amazing Melissa McCarthy). What's great about both films is that they're female driven and have a lot of girl power — Bullock and McCarthy were squad goals even before the phrase existed.

Let's settle this and let the comparison begin.

Sarah is so serious, uptight, and very tightly wound. No sarcasm or jokes here.

Gracie is sarcastic and has a biting wit — but she's genuine when it matters.

Winner: Miss Congeniality, because the way Gracie mocks beauty pageants is hilarious, but she also comes to believe in her new friends there.

The Heat — Back Story

Sarah wants a promotion, but all her co-workers hate her because she's uptight and condescending. Later on, the audience learns that Sarah was once a foster child.

During a sting, Gracie saves the target from choking, disobeying her boss' command. It leads to a member of the team getting shot and relegates Gracie to desk duty.

Winner: Miss Congeniality, because at least Gracie Hart has, well, a heart.

Lonely. Sarah has a cat.

Winner: The Heat, because of the cat.

A total mess that just rolled out of bed and got a beer.

Winner: The Heat, because at least Sarah brushes her hair.

When Sarah and Shannon go to a club, Shannon tries to make Sarah look like she belongs there and less like a chaperone. Thus, this amazing makeover scene occurs, in which Shannon converts Sarah's pantsuit into acceptable party wear.

Gracie undergoes the makeover to end all makeovers to become a viable beauty pageant contestant.

Winner: Miss Congeniality, because Gracie deserves it after all that plucking and waxing.

I think that GIF says it all.

Gracie's partner is the smoldering Eric Matthews (Benjamin Bratt), who is head of her Miss United States mission and her love interest.

Winner: The Heat, because it is very tough to top Melissa McCarthy.

It's a tie! Miss Congeniality: 3. The Heat: 3. After all, both characters are played to comedic perfection by Sandra Bullock.

More like this
Sandra Bullock, Girlboss Extraordinaire
By Matt Harkins & Viviana Olen
'Doctor Who’s New Star Is Already Huge On TikTok
By Maxine Harrison
How Ncuti Gatwa's 'Doctor Who' Casting Impacts His 'Sex Education' Future
By Nola Ojomu
Elizabeth Olsen’s ‘SNL’ Cameo Made Benedict Cumberbatch A Multiverse Believer
By Grace Wehniainen
Get Even More From Bustle — Sign Up For The Newsletter