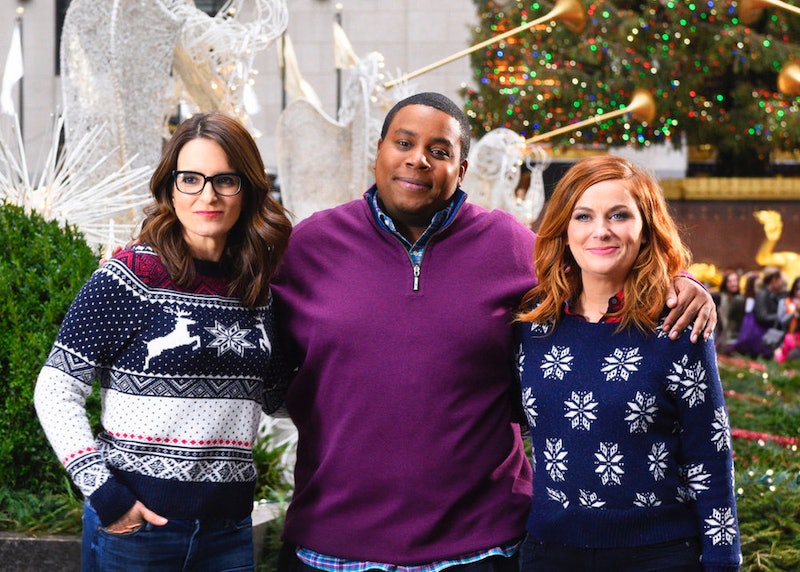 Tina Fey and Amy Poehler are back on Saturday Night Live — as hosts — and it's as glorious I'd hoped it be. Sure, I can also go see their new movie Sisters (and I will), but there's something magical about seeing this dynamic lady duo back at their old stomping grounds on Saturday night. Tina Fey and Amy Poehler's SNL opening monologue debuted the most awesome Christmas song you'll hear this season . More than anyone else, these two seriously define BFF goals.

After an opening sketch about the Republican Debate, Fey and Poehler took the stage dressed in stylish black and white formal wear. They began spoke in unison, literally finishing each others' sentences. "Like sisters, we are totally bonded, but totally different," Fey told the audience, pointing out that she's more traditional than Poehler. They debuted a Tina and Amy original Christmas song called "Merry Christmas Baby," which reflected those differences: Amy sung a very upbeat verse, but Tina's verse took a very dark — complete with ominous organ and the "SNL Gay Men's Chorus" singing backup.

"She's the peanut butter to my salami," Tina told the crowd. "Not really a combo, Amy said. "It is in my mouth," Tina said. Too funny. Then they switched places with Amy taking the more traditional song and Tina taking over the fun verse. So much fun!

But is it really any surprise that these two would come up with a hilarious Christmas song together? Fey and Poehler recently ended a incredible three-year as hosts of the Golden Globe Awards, making us all wish they could host every year until the end of time (oh well). Their decades-long friendship began when they met while doing improv in Chicago and then they both ended up at Saturday Night Live in the early aughts. They co-anchored Weekend Update together and gave us the classic Sarah Palin-Hillary Clinton 2008 sketch, with Fey's debut as look-a-like Palin. After they departed SNL, Fey and Poehler starred in the movies Baby Mama and Mean Girls together.

But seriously, nothing compares to having them both back on SNL.