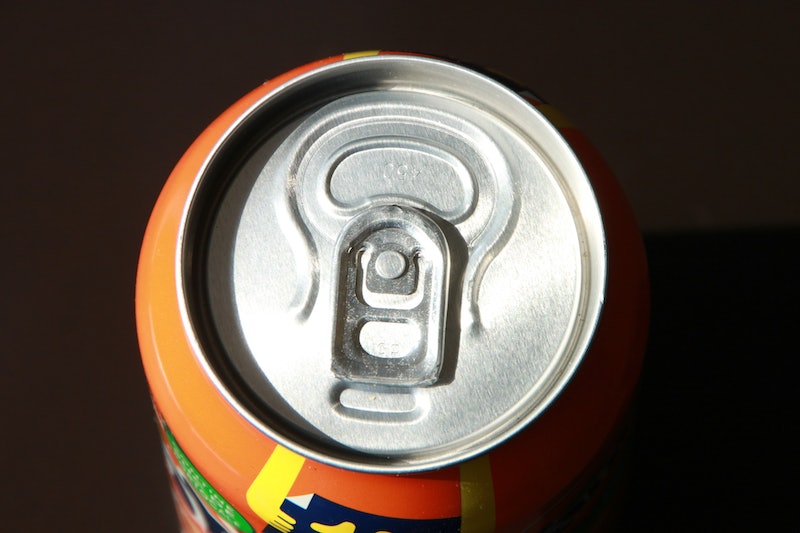 Ever had a sleepless night, only to realize you didn't have any coffee earlier that day? We all know that coffee contains a good amount of caffeine, but there are other sneaky sources of caffeine that are present in other food and drinks that you may not be aware of. Consuming these foods can leave you feeling wired during the day or restless at night, and if you're looking to have a relaxing day or an early evening, you might want to know what could be causing you to receive those boosts of energy.

"It's important to know what products contain caffeine because it can be very easy to over do it," says Tiffany Newenhouse, RD, to Bustle over email. "A little bit of caffeine is just fine, but if you're grabbing coffee in the morning, soda with lunch, Red Bull for the afternoon slump, and iced tea for dinner, you've had too much!"

Although caffeine can have its perks, it can also have some unwanted side effects. "Caffeine stimulates the central nervous system, and the effects of excessive caffeine can be far reaching from shakiness to irregular heart beat," says Newenhouse. "Too much caffeine will obviously affect your sleeping patterns. This alone can lead to a whole other slew of issues such as hormone imbalance, digestion troubles, memory loss, and weight gain."

For reference, a normal cup of brewed coffee contains about 95 milligrams of caffeine, but other surprising products can contain less obvious, smaller amounts as well. If you're trying to cut down on your caffeine intake or just want to be aware of what ingredients are in the products you buy, keep an eye for these seven sneaky sources of caffeine.

Although most people are aware that cola sodas contain the stimulant, other varieties such as Mountain Dew and orange soda contain caffeine as well. For instance, Sunkist contains 41 milligrams of caffeine, which is equal to almost have a cup of coffee.

You might think your candy bar is innocent, but cocoa beans naturally contain small amounts of caffeine. The darker the chocolate, the higher the amount of caffeine, but one 1.55 ounce Hershey's chocolate bar contains nine milligrams of the stimulant.

Many people will be surprised to find that decaf coffee is not actually free of caffeine after all. A study from the Johns Hopkins School of Medicine found that the average cup of decaf coffee contained 8.6 to 13.9 milligrams of caffeine, so if you're having multiple cups, it could add up quickly.

Certain pain medication such as Midol or Excedrin actually contain 60 to 65 milligrams of caffeine per pill. Next time you have a headache or period cramps, you may want to check the box to make sure you're not ingesting any unwanted caffeine.

Energy waters have the word "energy" in them for a reason, as they're often supplemented with caffeine for an instant boost. They often contain more caffeine than coffee, ranging in amounts from 90 milligrams to 180 milligrams.

Many weight-loss pills contain high amounts of caffeine, as these supplements use herbs such as guarana that naturally contain the stimulant. Taken too often, the pills can also have negative health effects.

Protein bars such as Clif Energy Bars can often have caffeine, with some bars containing as high as 50 milligrams. Many times this caffeine comes from coffee extract itself, or from other sources such as green tea or chocolate.

Of course, if caffeine is what you're after, then the majority of these products are probably a great option for you, but if you're trying to fall asleep more easily at night or cut back on caffeine in general, then it's probably best to avoid these snacks.