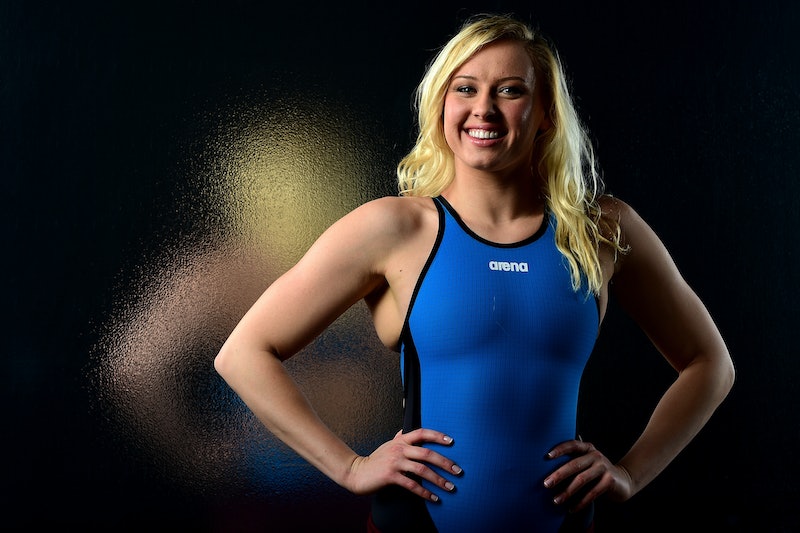 For the first time, Paralympic swimmer Jessica Long's friends and family will be able to watch live as she takes her starting position, dives into the water following the ding of the buzzer, and races for her 13th gold medal in Rio de Janeiro. The 2016 Paralympic Summer Games will be broadcast in the U.S. more extensively than ever before, and along with Long's closest fans, Americans will finally have the chance to follow Paralympic athletes alongside Olympic athletes this summer. Long hopes live coverage of the 2016 Paralympic Games will finally get more Americans excited about the Olympics' sister games and give Paralympic athletes the recognition they deserve.

In 2013, NBC Olympics acquired the media rights to the following two Paralympic Games, partnering with the United States Olympic Committee (USOC) to show 50 hours of TV coverage for Sochi 2014 and 66 hours for Rio 2016, a huge step up from the 5.5 hours of NBC and NBCSN coverage of London 2012. So, Rio 2016 will be the first time summer athletes like Long will be seen live by potentially millions of Americans as they compete with athletes from across the world with a range of physical disabilities.

Long was born with fibular hemimelia, a congenital lower limb defect, and had both legs amputated below the knee after being adopted from Russia when she was 18 months old. First competing in the 2004 Paralympics in Athens when she was only 12, Long won three gold medals as one of the youngest athletes. She then went on to snatch nine more gold medals in Beijing in 2008 and London in 2012 combined. Despite all her success, she doesn't have the same name recognition as Olympic swimmers like Michael Phelps, who's now a household name, in part because Americans couldn't follow her Paralympic journey on TV in the same way.

Even for some of Long's family, it's difficult to imagine what takes place at the Paralympics when you aren't able to watch along. "I'm so excited for my family — those who are not able to travel with me to the Games — to actually be able to see what I do," says Long, who talks as fast as she swims. "How the Paralympics is exactly like the Olympics."

Since Rio de Janeiro is only one hour ahead of America's Eastern time zone, NBC will broadcast many events in real time, which wasn't possible for Sochi 2014, as the Russian city is 8 hours ahead. In a statement sent to Bustle, NBC Olympics President Gary Zenkel says:

As we did in Sochi, we are looking forward to partnering with the USOC to tell the stories of the world's amazing Paralympic athletes with unprecedented coverage of the Games. Rio's 66 hours of coverage will be a Paralympics record, and will be the first Summer Games to be presented across multiple platforms, including live streaming covered by the host broadcast on USOC.org. The ability to provide this significant increase in coverage is once again made possible by our six corporate sponsors, all of whom recognize the excitement and drama that Paralympic athletes generate. We'll have more details about our coverage as we get closer to the start of the Games.

Team USA athletes from every sport are excited that the coverage will allow them to highlight the history of the Paralympic movement and the great athletes that came before them, but went unnoticed, according to Rick Adams, chief of Paralympic sport for the USOC. "There are a lot of athletes who have done great things for a lot of years who unfortunately didn't have the benefit of this coverage," Adams says.

It will do more than just give athletes like Long more recognition, though. "I think this is going to bring even more awareness in the next year to people with disabilities," Long says. As the Paralympics become more visible, so will people with disabilities throughout the country — along with showcasing extremely talented athletes, the games prove to those who don't already know that people with disabilities are just as capable as able-bodied people. Because of this, Rio 2016 is a real opportunity to educate and change Americans' perceptions about the disabled community. "The Paralympic Games are the number one sporting event for driving societal change," says Craig Spence, International Paralympic Committee (IPC) communications director. "They change attitudes about what persons with disabilities can achieve."

When it comes to Paralympic coverage, Spence tells Bustle from the IPC headquarters in Germany, "The U.S. is a late starter." Other countries have broadcast the games for years — 115 countries in 2012. So, the unprecedented coverage of Rio 2016 is only unprecedented for America, which is finally catching up to other parts of the world.

Channel 4 in Britain extensively broadcast the London 2012 Paralympics, and two-thirds of the U.K. population watched the games. According to a survey conducted by Opinion Leader afterwards, 85 percent of people in the U.K. believed Paralympic athletes were just as professional as able-bodied athletes. This positive response and large viewership in London motivated more countries than ever before to broadcast the games in 2016, the U.S. included.

For Long, the additional broadcasting won't add any pressure for her to perform well — at least not that she can foresee. "I'm just so excited that we're finally going to get some recognition for the Paralympics," she says.

The Paralympics contain everything Americans love about the Olympics — competition, suspense, speed, personal stories — as well as the added element of athletes competing without arms or legs, or a variety of other physical disabilities.

"I think people are going to fall in love with it," Long says. "I don't know how you couldn't."